“I suppose it’s a bit hard to us to think anything’s over and gone in our lives; and there’s a parting at the root of all our joys.”

A few years ago I visited the house in which I grew up. My parents had long since moved away, and the place had been abandoned—a result, no doubt, of the recession and the spate of foreclosures that had plagued the area. There was a somberness about the place, born of the contrast between my happy memories of it and the state of disrepair into which it had obviously fallen. After having ascertained that there were no residents—a fact made plain enough by a quick peek in the living room window—I made bold to hop over the fence and explore the backyard in which I had spent a joyful childhood and youth.

The trees were overgrown, and the lawn—which I had grumblingly mowed every Saturday for years—appeared to have claimed the victory in a battle with the patio and the walkways. I felt a pit in my stomach as I realized that the flowerbeds on which my mother had lavished so much careful attention had become the preserve of weeds and wildness.

Most disconcerting, though, was the state of the swimming pool. Far from being the pleasant suburban oasis of memory in which I had spent the better part of every summer—especially after the arduous lawn mowings—it was now a disused watery version of the house itself. Instead of the clear, chlorinated liquid that my father had always labored assiduously to preserve in prime condition for would-be swimmers, it was now filled with a mossy, deep-green water so thick with algae that I couldn’t see to the bottom. It was hard to believe that so many childhood hours had been wasted gloriously away in what now looked more like some sort of primeval swamp than a suburban swimming hole. Not waiting for a six-foot-long dragonfly or some monstrous crocodilian creature to emerge from the depths and confirm that the Jurassic period had conquered my childhood, I hightailed it out of the yard, more than a little spooked and glad to get back to the well-ordered world of the present.

My encounter with the physical remnants of my past and their own disappointing present, though, had been intriguingly enlightening. As hard as I struggle to intellectually accept the fact, the houses or streets or cities where I’ve lived over the years apparently do remain in existence without my being there to occupy them. Places are brought into existence—at least as far as our personal experience with them is concerned—as we encounter them. And to suddenly realize, as I did seeing my moss-infested swimming pool, that they’ve gone on without us can be disconcerting and strange, a weird reminder that although our experience brings the world into existence anew with each encounter, the world is also capable of getting along very well without us, thank you very much.

I sometimes wonder whether Adam, after being expelled from the Garden, didn’t feel the same sort of thing that I have often felt when I reflect back on the memories of my youth. He was well aware, I’m sure, that the plodding, workaday world of the present was the path leading to greater happiness and more lasting fulfillment, but I imagine him nevertheless looking back longingly at Eden and letting his thoughts run to the joy of innocence and a life free of care. Was he sometimes permitted to wander back through the Garden, only to find it overgrown and bereft of its former glory? If so, I can’t help but imagine that he felt the pang, known to all his children whenever they’ve reflected on the disappearance of childhood and youth, that says, “You’ve lost something that you won’t get back. No matter how bright the future, the past is gone forever except in your recollection of it, and the dimmer that becomes, the less you are able to conjure it using your will to memory, until at last it has faded away forever from every canvas except the mind of God.”

And yet the question remains, how useful is memory anyway? If it only serves to draw me back into a time that has ceased to exist, to prevent me from making real headway on the roads of the present, maybe the personalized past of memory is a hindrance rather than a help.

I once decided to walk a mountain path that I had walked frequently as a boy and a young man. When my cousins and parents and siblings and aunts and uncles and grandparents and I used to hike there, it was a well-defined trail (defined mainly by us, I later came to discover) on which we could identify every turn, every craggy and oversized rock, every little stream crossing. I could have walked the path in my sleep, I knew its ins and outs and its peculiarities so well.

When I returned years later, though, not only did the major landmarks of childhood memory prove woefully inadequate to orient me, but I soon discovered that the trail itself had completely disappeared. Where I had once been able to run ahead and wait for the others to catch up, it was now nearly impossible to even determine where our original path had run. It frequently disappeared completely in the thick undergrowth and could be recovered only by treading gingerly through stinging nettle plants and climbing over fallen logs and relying on a great deal of guesswork. In other places, it was clear that the shape of the landscape had changed dramatically enough that wherever my path lay before, it was not to be found anymore.

On this attempted walk down what was, for me, a literal memory lane, it became clear that despite the static nature of the mental pictures we retain like hangings on a gallery wall, the real, natural, ongoing, living world refuses to be kept at bay so as to conform to our recollections. The places I knew as a child are no longer, even when I am able to stand in the physical space I inhabited in years gone by. And sure as I am that this forced migration from the glorious Eden of the past to the ambiguous world of the present is undoubtedly for the best, there is an ache that accompanies the fact of its existence, and in quiet times I think that the death of then is a necessary part of its labor to give birth to now.

The ache is a divinely installed one, though—I’m confident of that. For all the righteous action that contemplation of a glorious future inspires, there is an equivalent portion of thoughtful meditation, of reflection brought on by the conviction that things are not as they were in youth or childhood or in a premortal realm where the march of time had not yet managed to create conflicts between memory and consciousness. As we think of the way things were, we (hopefully) are struck by the need to make the present into the paths for which we will hunt in some future foray into memory.

Maybe, after all, it’s not just our guilt of which we will have a bright recollection after this life (see Alma 11:43). Maybe part of what awaits us, for better or for worse, depending on how we’ve prepared for it, is a perfect recollection of our whole mortal experience—the great moments, yes, but not those primarily, since they’re what we would remember anyway. Primarily, I think, a perfect recollection hereafter, a knowing (ourselves) as we are known, is going to be not so much a highlights reel as a collection of the minutiae—the million little moments that are so easily forgotten but that make up, much more than the “defining” times, the reality of life and experience, sorrow and joy, humanity and peace.

The flip side of this coin, the great fear that memory threatens, is of course the fear of loss and of failure to remember, or even of that which we hope not to remember. Recollection is not just enjoyment of past bliss and glory; for us, as it was for Adam, it can also be confrontation with evil and recognition of competing claims to our allegiance and, almost always, eventual expulsion. But here, too, the processes that make up our experience with memory are working in our favor—the appearance of undergrowth and fallen logs and randomly strewn branches will often give shape, context, and form to what was incomprehensible before in the immediacy that was the past’s now.

There are ways to look at the grown-over path or the mossy swimming pool, recognize them for what they are today (sometimes beautiful in their own ways), and still appreciate what they were before. Every Thanksgiving I make a pan of candied sweet potatoes using exactly the recipe that my grandma used to use. It is a very American version of Proust’s famous madeleine moment, and eating them invariably places me near those who have left me but who continue to bring me joy and solace. There are books I read with my children that simultaneously transport me to times listening to the same stories with my parents and to times when my own children will read them to their kids. Concrete action and tradition thus provides present shape for the past and allows me to project it happily into the future.

Memory, when it can forge such a union of the past, present, and future, the three great realities that can be always before me, is more precious to me than any childhood home or beloved mountain trail—it is the very glue that keeps me bound to what I have been, what I am, and what I will become. 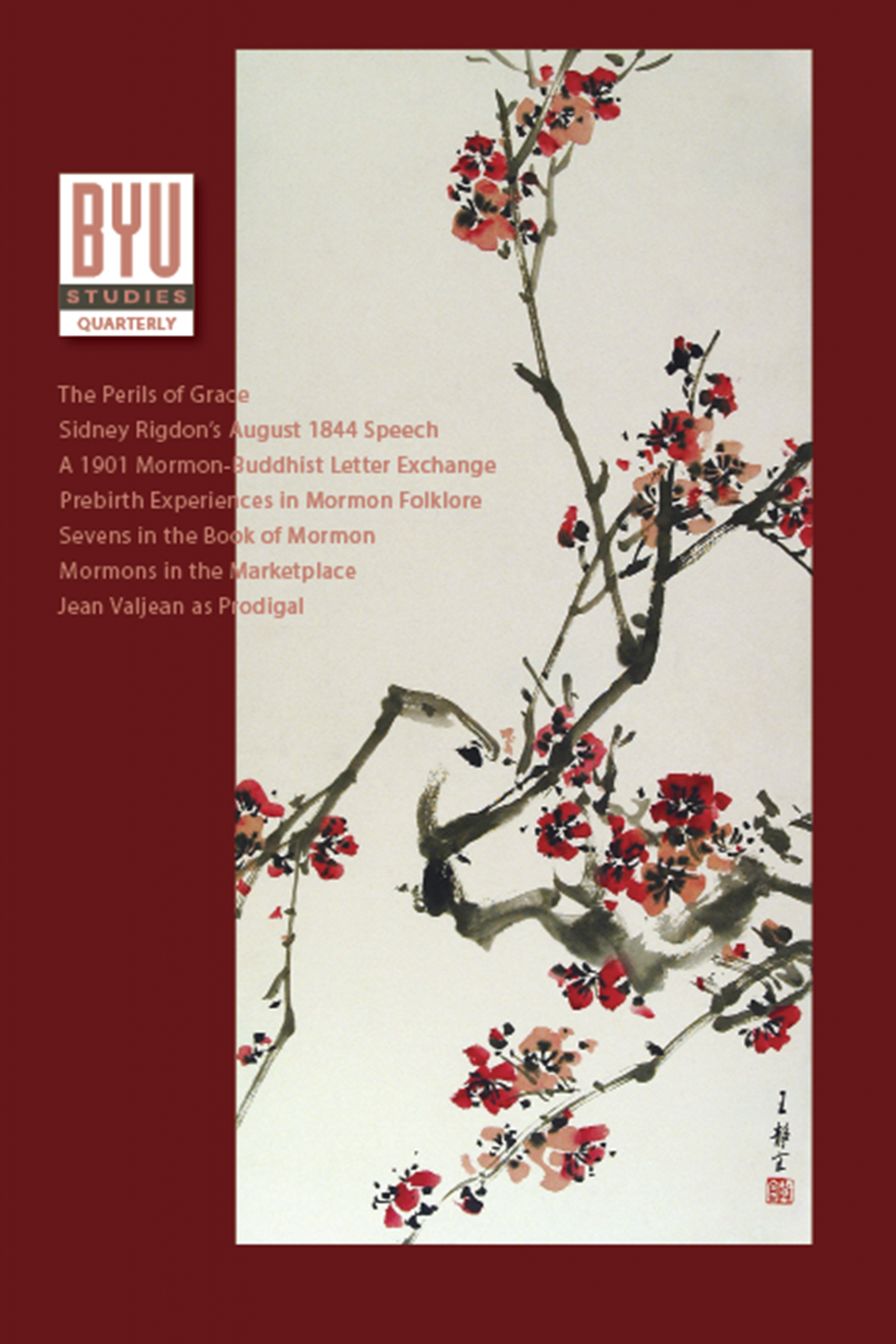 BYU Studies Quarterly 53:2
Next:
Be It unto Me

This essay by Patrick Moran received an honorable mention in the BYU Studies 2014 personal essay contest.