A new geologic map of the State of Utah is about completed. The southeast quadrant which finishes the job will be off the press shortly. The three segments now available are unusually well done, with details all readable and coloring artistically applied. It is a scientific demonstration in map accuracy and artistry as well.

The map is drawn to a scale of 1/250,000 and has a contour interval of 200 feet. This present map is a great improvement over the old 1918 B. S. Butler print, which had a horizontal scale of 1/800,000. During the interval between publication of the old 1918 map and the present, many unmapped areas have been mapped and many previously mapped areas have been remapped in greater detail. The new map is a fine example of a cooperative effort in which the Federal government, State government, universities and many private companies and individuals have pooled their material and human resources to complete a much-needed job. It should help to stimulate additional industrial and geologic work in Utah as well as demonstrate anew a pioneer spirit in accomplishment.

Dr. W. Lee Stokes, chairman of the Department of Geology at the University of Utah, coordinated the project and assumed full responsibility for the northern half of the state, while Dr. Lehi F. Hintze, chairman of the Geology Department at B.Y.U., assumed the responsibility for compilation of the southern half. Completion of this task has been a geologist’s dream for many years. Many masters’ theses and other research by graduate students and professors from the major Utah universities, together with several schools from other states, have contributed to the finished new map. At B.Y.U. alone, 55 theses, mostly in Western Utah areas, have contributed to the mapping effort, and represent 5,000 square miles of new mapping. Figured at a cost of $20 per square mile (a nominal figure), it would represent a total work contribution of more than $100,000 by B.Y.U. students alone. Similar contributions by other schools and agencies are to be credited in helping to complete the project.

Authorization for the project came through the College of Mines and Mineral Industry of the University of Utah, with Dr. A. J. Eardley as dean, through endorsement of the State Land Board, with Mr. Frank J. Allen director, and with support of Governor George D. Clyde. The map base was prepared by the U.S. Army from air photo prints. The additional printing, compilation, and supplementary field mapping was made possible by support of the State Land Board at a cost of $250,000.

Dr. Lehi Hintze has a natural liking for maps and map making and had long been interested in this project—even before it became a possibility. He had earlier published a small 8½″ × 11″ state map, and preliminary compilations of the western part of the state on a larger scale. Professors H. J. Bissell, J. Keith Rigby, Kenneth C. Bullock and Lehi Hintze guided much of the mapping by the graduate students. Many others at B.Y.U. aided directly or indirectly in the school’s contribution to the over-all project and are to be congratulated for their industry and foresight.

The new geologic map is a milestone in geologic achievement and an excellent tool for the geologists and related groups in the state of Utah. It is a good job well done. 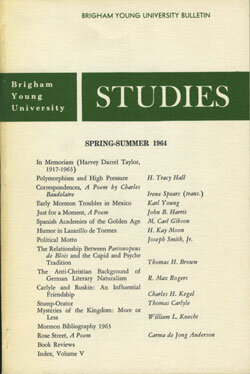 Previous:
The Latter-day Saints in the Modern-Day World