President Joseph F. Smith and a group of other Latter-day Saint Church leaders, accompanied by family and friends, left Salt Lake City on December 15, 1905, for Vermont to dedicate a memorial honoring the Prophet Joseph Smith, on the hundredth anniversary of his birth. During their trip, they visited Church historical sites in Ohio, New York, and Vermont and Smith family sites in Massachusetts, Vermont, and New York. Photographs were taken during most of the trip, preserving a view of the places considered sacred to the ever growing number of members of the Church.

Historical Context of the Photographs

“I should like to see introduced among the Latter-day Saints, even at the risk of introducing another general holiday, the practice of celebrating or commemorating the birthday of the Prophet Joseph Smith,” observed Joseph F. Smith, counselor in the First Presidency, at memorial services December 23, 1894, held in honor of his martyred uncle’s birthday. Speaking at the Salt Lake City Sixteenth Ward meetinghouse, President Smith noted that in the fifty years following Joseph’s martyrdom, only on random occasions and generally on a local basis, had Latter-day Saints come together on December 23 to honor the Prophet of the Restoration.1

The birthday of Joseph Smith, of course, never did acquire official holiday status among Latter-day Saints. But interestingly, two months or so earlier in 1894 and two thousand or so miles distant, another admirer of the Prophet Joseph was setting into motion events that would satisfy President Smith’s yearning to memorialize the Church’s founder.

That admirer was YMMIA leader Junius F. Wells, son of Daniel H. Wells, who was a counselor to President Brigham Young. On a stunning autumn day in Sharon, Vermont, Junius, along with Spencer Clawson and Clara Clawson, Spencer’s daughter, were following their guide Harvey Smith, tromping through tall Vermont amber grass to a site that only Harvey was familiar with. After a short journey, Harvey Smith located the granite hearthstone that had once graced the modest cabin of Joseph Smith Sr. and Lucy Mack—the cabin where the Prophet Joseph was born. Junius thought at the time that a fitting memorial ought to be constructed there, but in the years following, he never aggressively pursued the notion.2

Ten years later, in the April 1904 general conference, First Counselor John R. Winder read a resolution proposing that “a suitable building or monument” be erected to the memory of Joseph and Hyrum Smith.3 Perhaps that announcement prompted Junius Wells to bring to fruition his earlier hope of erecting a memorial in Sharon. Learning that the Solomon Mack farm was possibly available for purchase, Wells, on behalf of the Church, consummated the sale on May 23, 1905.4 Wells suggested to the First Presidency that a monument be placed in the area, and in July he was given authority to use his considerable diplomatic and organizational skills to bring this suggestion about—in quick fashion. The goal was to have the monument in place by December 23, 1905—the 100th anniversary of the Prophet Joseph’s birth.5

Faced with the prospect of transporting one hundred tons of Vermont granite (in three sections—a forty-three-ton shaft and two bases) from the railroad site in South Royalton to the birth site in Sharon—a distance of six miles—Wells saw to it that special sections of railroad track were constructed and arranged for railroad cars that had superior strength. At his instigation, bridges were reinforced, and roads were improved.6 It was a Herculean task performed in the dead of a Vermont winter, a winter that Wells claimed the Lord moderated (at least until the time of dedication) in order that his task be completed.7 When the Centennial Memorial party arrived on December 22, they found the operation well under control. The imposing granite shaft monument was in place, and nearby a memorial cottage, which was just being finished, stood over the actual birthplace of Joseph.

The printed invitation issued by the First Presidency invited Church members to two different services held on successive days. The first portion of the invitation requested “the pleasure of your presence” at the actual dedicatory services on December 23 at Sharon, Windsor County, Vermont. The second portion requested “Latter-day Saints throughout the world” to attend local memorial services to be held on Sunday, December 24. Following the signatures of the First Presidency, a concluding statement read as follows: “Owing to the Winter Season and limited accommodations, a personal response to this invitation is not expected by those living at a distance except in special cases.”8 Likely, this statement had the effect of limiting the number of dedicatory participants to those selected by President Joseph F. Smith, who, according to Elder George Albert Smith, chose twenty-nine of the thirty participants.9

As it turned out, most of the thirty people chosen to participate in this memorable journey were in some way connected to the Prophet Joseph by bloodline, by personal association, or by ancestral friendship (see the sidebar). At least that is the rationale provided by Susa Young Gates, herself a participant, in her lively account of the journey printed in the Improvement Era in 1906.10

Gates also recorded that “representatives of other staunch and true men of the Church were invited, but were unable to go.” This list probably included such well-known figures as J. Golden Kimball; Bathsheba W. Smith, “the only living person who received her endowments from the Prophet [Joseph]”; and Emmeline B. Wells, one of the gifted and great women of the Church. Their reasons for declining the invitation are not given.11 Possibly some were unable to go because of advanced age or health considerations. Or possibly some were unable to raise sufficient funds to purchase a ticket. Both Gates, in her Improvement Era summary, and George Albert Smith, in his conference report of the journey, made it clear that participants paid their own way.12 Elder Smith chose to broach the matter because he was persuaded that a minority of church members “who do not pay tithing seem unduly anxious for fear someone else shall benefit by the tithes other people pay.”13

The traveling group left Salt Lake City on December 18. George Albert Smith, the group’s business and financial manager, had arranged for them to travel on a well-equipped Pullman car, the “Sofala” (figs. 1, 2).14 According to Elder John Henry Smith, the group spent the first day of travel in reading and playing games.15 Presumably, these activities, along with sightseeing and social discourse (and possibly occasional drowsing), were the main time fillers. President Smith’s group (fig. 3) arrived in South Royalton on the morning of December 22. Hours later, the Utah group was joined by twenty eastern Saints led by Eastern States Mission President John McQuarrie.16 All were treated splendidly by the South Royalton residents. Elder George Albert Smith observed that the people of the town “decorated, festooned, and seated a comfortable hall, where we held meetings and gatherings and became acquainted with the people.”17

Dedicatory services began at 11 a.m. the next day, December 23, 1905, the 100th anniversary of Joseph Smith’s birth. The group was filled with both expectancy and gratitude. Junius F. Wells, Francis M. Lyman, John Henry Smith, Hyrum M. Smith, Jesse M. Smith, and Charles W. Penrose presented remarks, all but Wells’s being brief ones. In addition to their main comments, most of the speakers heaped unstinting praise on the nonmember townspeople, whose acts of generosity and hospitality seemingly knew no bounds. Dr. Edgar J. Fish, of South Royalton, also gave brief remarks, greeting the visiting Saints “in that broad spirit of toleration, of Christian charity, of brotherly love, which unites men of every country, of every sect, and of every nation.” Fish’s comment was followed by hearty applause.18

President Joseph F. Smith gave the dedicatory prayer. Not surprisingly, much of the prayer was given over to extolling the virtues and accomplishments of Joseph Smith. President Smith paid tribute to Joseph Smith as “a polished shaft in Thine hand, reflecting the light of heaven, even Thy glorious light, unto the children of men.”19

Edith Smith, the oldest female representative of the Smith family in the traveling company and the “unpaid historian and temple recorder” for the Smiths, was granted the honor of unveiling the monument.20 As “her slender hand drew the rope which bound the Stars and Stripes about the polished base,” recorded Gates, “a shout at once arose, and men reverently lifted their hats, while women wept with joy and gratitude that such a man lived, had died, and now had been remembered.”21

The next morning, Sunday, December 24, the Utah delegation left for Boston. After holding two meetings with the Saints and visiting Smith family ancestral sites, the memorial party left on Christmas night for Palmyra and Hill Cumorah country. On the trip home, they stopped at Kirtland to tour the Kirtland Temple and at Chicago to meet with the local Saints. They arrived in Salt Lake City on January 1, 1906, tired but fulfilled after a journey of two weeks that according to Elder George A. Smith was conducted “without sickness, accident or delay, with no unkind word, and with nothing but brotherly love from our Father’s children wherever we met them, we were welcomed home by our families, and ate our New Year’s dinner with them.”22

Provenance of the Photographs

For most members of the Centennial Memorial party—if not all—the trip to Vermont and other significant historical sites constituted a defining moment in their individual lives. In his biographical sketches of important Church members, Assistant Church Historian Andrew Jenson (who, given his interest in Church history, would probably have given nearly anything to have taken the journey), always listed the dedicatory trip to Vermont as one of the significant happenings in the lives of the participants.23 “Out of the mists of memory,” Susa Young Gates aptly wrote, “rises that exquisite shaft. It cleaves the sky, the flawless surface bearing a clear-toned, divine message to the darkened world of superstition and unbelief.”24

Joseph F. Smith, President of the Church, “the living representative of the great family through which came the prophet”

Francis M. Lyman, President of the Quorum of Twelve

members of the Seventy

wives of some of the stake presidents and patriarchs

Lorin C. Farr, who was baptized in 1832 and had lived with the Prophet

George F. Richards of the Tooele Stake, representing the families of both Willard and Franklin D. Richards 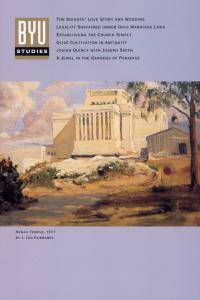 Previous:
New Photograph of the Granite Shaft for the Brigham Young Monument

BYU Studies Quarterly 39:4
Next:
Recent Notes about Olives in Antiquity