Off on the Right Foot

When I was appointed editor of BYU Studies in 1991, I was keenly aware of the sterling, scholarly reputation that this journal had won for itself since its inception in 1959. My hope was to build on that solid foundation, which had been put clearly in place right from the journal’s earliest days.

The first issue of BYU Studies was published on January 15, 1959. From day one, the stated purpose of this journal was “to be a voice for the community of LDS scholars.” Led by Editor Clinton F. Larson and Associate Editor Lewis M. Rogers, assisted by eleven other scholars from various departments (several of whom doubled as authors, editors, or reviewers), the journal began with a clear sense of its multidisciplinary LDS mission. Forty years later, BYU Studies still strives to “publish articles that openly reflect a Latter-day Saint point of view and are obviously relevant to subjects of general interest to Latter-day Saints, while conforming to high scholarly standards.” In retrospect, that objective worked just as well for volume 1, number 1, as it does for our most recent issues.

I have always enjoyed the way in which BYU Studies draws on all fields of learning. Topics in that first 75-page issue included music, journalism, philosophy, literature, economic history, the humanities, and historiography. The authors, among whom were such notables as Assistant Professors Truman G. Madsen and Marden J. Clark and Associate Professor Leonard J. Arrington, came from the departments of music, English, art, history, philosophy, and religion at BYU, as well as economics at Utah State University. This diversity continues to be one of the main trademarks of BYU Studies.

I have tried zealously to cultivate the range of subjects that have been covered in BYU Studies from the beginning. The spirit back in 1959 was open and adventuresome. A fearless optimism pervaded the world, chilled only occasionally by the winds of the cold war. The Geophysical Year, space exploration, the beginnings of computers, electronic guitars, metal skis, and Cadillacs with fins as large as airplane rudders made the world an exciting place in which to live. The Vietnam War had not yet begun, at least not for the United States; the Civil Rights movement was getting underway, but none of its turmoil or city burnings had set in; the Dodgers had moved to Los Angeles; and Hugh Nibley was in his prime. The year before, BYU had several All-American basketball stars, its baseball team won a berth in the College World Series, and its football team beat Utah for only the second time in the century. It was an exciting time for me to grow up in California, graduating from high school in 1964 and entering into the Honors Program at BYU that fall. Spanking new buildings dotted the upper campus, as we celebrated the dedication of the new Ernest L. Wilkinson Center (which at first was listed in the telephone directory as the “WC”). It seemed that nothing could go wrong. Under the direction of President Ernest L. Wilkinson, the university had doubled in size almost overnight. Young Ph.D.’s expanded the ranks of the faculty. In bucolic Provo, someone posted the words “The World Is Our Campus.” A large library, the administration building, and many other buildings were under construction, the expansion promising to make BYU a major university, and a 25,000-seat football stadium was soon to open. Virgil Carter would soon begin completing passes.

Out of this optimistic mood and mind-set, BYU Studies was born. That period of time also shaped some of my basic attitudes toward editing and scholarship. In that first issue of BYU Studies were several bold pieces, welcoming thoughtful criticism, embracing LDS fundamentals, breaking new ground, cherishing excellence, asking good questions, and flourishing with open and respectful expression. It was not a child of the discontent of the ’60s or of the distrust of the ’70s.

I hope that, forty years and four editors later, the character of BYU Studies still exemplifies the goodness of Latter-day Saint scholarship and serves its host church and university through Christian virtues, unity, intellectual and spiritual harmony, accuracy, thoroughness, humility, and charity. We still live in dynamic times. After four decades of publication, BYU Studies is well positioned to enter the promised millennium as a contributor to the future of the kingdom by promoting LDS scholarship worldwide.

Working at BYU Studies has given me great spiritual joy and academic satisfaction. Our successes in dramatically increasing the number of pages published each year, while at the same time improving quality and timeliness, have been due in large measure to the high quality submissions we receive from authors who are willing to stay with their projects as long as it takes. Their love of learning and care about stating their conclusions accurately has made my work invigorating and pleasurable. There is never a dull moment. Working with important documents never before published and building definitive articles on key events, such as the restoration of the priesthood or the visions of Joseph Smith, are rare opportunities to feel the spirit of the Restoration. The teamwork of advisors, editors, scholars, and staff members who are all deeply committed to publishing products with only the best possible content, diction, and design has made me very happy. Bonuses have come in the form of national and international awards, our co-sponsorship of world-class exhibits, and the scholarly successes of the students trained as interns in this unique program.

Challenges, of course, continue to confront us. Time is scarce. Because I continue to teach half time at the law school and to serve as a director of the Foundation for Ancient Research and Mormon Studies, my appointment at BYU Studies can be only half time. Likewise, my executive editor, Doris Dant, carries a substantial teaching load in English and Religious Education, and my associate editors carry full loads in their academic positions. We lament that we can do only so much.

Selecting what to publish is also a constant concern. The weight of academic freedom falls heavier, in my opinion, on determining which questions are the most important to address than on deciding what answers to give. With Mormonism emerging as the youngest (yet oldest) world religion, the work of LDS scholarship has only just begun.

In addition, the lack of public awareness has always been a bit of a bugaboo for BYU Studies. For many reasons, very few people know about BYU Studies. Subscription levels are excellent for an academic journal but poor compared to where we would like them to be. Hopefully, through technology and collaborative alliances, we will be able to bring BYU Studies out of obscurity. As our forthcoming Forty-Year Report will show, BYU Studies has come a long way in its quest for a Zion land of scholarship consecrated to the Lord. We hope that forty years in the wilderness is long enough.

The prophet Joel foresaw the forward march of the hosts of God in the day of the Lord:

As horsemen, so shall they run. Like the noise of chariots on the tops of mountains shall they leap, like the noise of a flame of fire that devoureth the stubble, as a strong people set in battle array. . . . they shall march every one on his ways, and they shall not break their ranks: Neither shall one thrust another; they shall walk everyone in his path. . . . And the Lord shall utter his voice before his army: for his camp is very great: for he is strong that executeth his word. (Joel 2:4–5, 7–8, 11)

Sounding the word with speed and with each disciple and discipline fulfilling its function without dissension or confusion in the ranks, that first issue of BYU Studies got off on the right foot in 1959 in its unique purpose of publishing faithful LDS scholarship. Over the course of the journal’s first forty years, I have become even more optimistic about the role it will yet play in the establishment of Zion. 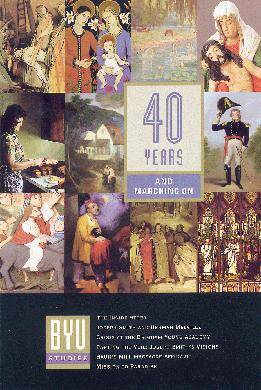