On Being a Disciple of Hope

I am a political scientist, which means that I study patterns in politics. Most of the patterns in politics that I study are patterns of sexism. I work to accurately measure and carefully describe patterns of sexism in how political parties recruit candidates, how voters vote, how we deliberate with each other, or how Congress operates. Some of my work even identifies sexism in the methods other political scientists have used to study these topics in the past. On top of that, as a professor, I spend a significant part of my workday introducing these and other patterns of sexism to students. We talk about coverture in early America; the origins and consequences of hurtful stereotypes about Black women; intimate partner violence, sexual assault and abuse; pressures parents face as they balance work and home demands; abortion; and the gender pay gap. It can be heavy. It can be easy to want to look away or give up. This essay is an attempt to explain how I maintain hope in the face of so much heaviness. It is a testimony that sometimes I have to bear to myself.

Activist and writer Mariame Kaba is known for embracing the motto “hope is a discipline,” a phrase she first heard from a nun who was deeply engaged in addressing the problems of our world even though her faith was rooted in the next.1 I meditate on this phrase frequently. Hope requires focus, concentration, and choice. I think about Abraham, “who against hope believed in hope” (Rom. 4:18). I think about how our scriptures describe hope as “lively” (1 Pet. 1:3) and “bright” (2 Ne. 31:20). I think about how our vision of creation is not a tidy ex nihilo one; it is one where “they, that is the Gods, organized and formed the heavens and the earth” (Abr. 4:1, emphasis added), which must have required exceptional discipline to act on their vision of beauty despite the chaos. And I especially think about hope’s role as the middle virtue of the faith, hope, and charity trio (1 Cor. 13:13).

Each semester, I do an activity with my students. I ask them for synonyms for faith—belief, conviction, trust, fidelity. I ask them for synonyms for hope—optimism, expectancy, anticipation, confidence. I ask them for synonyms for charity—love, kindness, generosity, selflessness. We talk about how faith in the Atonement of our Savior Jesus Christ leads to hope that God really does care about us and for us. As our faith grows, our confidence that God is committed to providing a way for us to heal from everything that limits, hurts, or harms us also grows. The hope that comes from believing in these practical implications of God’s love can open space in our hearts for charity because it lowers the risks associated with kindness, trust, and generosity.

Then I ask my students for antonyms of faith—fear, disbelief, distrust, doubt. I ask them for antonyms of hope—despair, pessimism, gloom, discouragement. I ask them for antonyms for charity—selfishness, hate, apathy, enmity. We talk about how fear makes us insecure, and that leads us to anxiety and pessimism. Ultimately, we turn to selfishness, apathy, or hatred as defense mechanisms. There is so little room for charity when we feel like we are all on our own.

What does this have to do with politics? While we may easily affirm the value of acting in faith, hope, and charity in the context of families, friendships, and neighborhoods, when it comes to politics, we often walk the pathway of fear, insecurity, and hostility.2 We call it “being realistic” or “not being naïve.” We take the position that everyone in politics acts in self-interest and that it therefore follows that nothing good can come from it (a conclusion that, by the way, many democratic theorists dispute). Perhaps we adopt this perspective because even in the healthiest democracies, politics can be messy, contentious, slow, and disappointing. Perhaps politics has been the source of pain and suffering in our lives or in the lives of those we care about. Perhaps it’s because we know politics isn’t, ultimately, what will save us.

I don’t think those are reasons to abandon the path of faith, hope, and charity, though—perhaps quite the opposite. Politics is a tool, and whoever uses that tool helps to determine what is built. Because we live in a democracy, there are some choices each of us will face, though we may not ever consciously engage with them. First, will I try to use the tool of politics? Second, if so, what will I help build?

There are all sorts of real considerations and barriers that people face as they make decisions about political involvement. Some face resource constraints. Some are disenfranchised. Some choose to concentrate their efforts outside of the structures of the state. It is not my position that people are morally obligated to expend all their energy registering people to vote or reading the news or fundraising for candidates, though I think we should seriously consider doing these things when we have the privilege to do so. It is my position, however, that the attitudes with which we approach politics have profound implications for ourselves and others. In particular, the approach I wish to focus on is the common glorification of cynicism about politics. Cynicism takes the view that earnestness cannot be trusted and that it is wise to be skeptical of all things that seem to be trying too hard. It tends to make us believe that it is foolish to hope for a better world and especially foolish to act on that hope. In my life, cynicism has been one of the chief impediments to engaging with politics (or any other tool of change) in a faithful, hopeful, charitable, and sustainable way.

Most cynics flatter themselves that they are being clever, savvy, and smart. In their contempt for sincerity and guilelessness, they see themselves as being too sensible to be duped. But in my experience, what is actually most seductive about cynicism is that it allows cynics to feel superior while also excusing them from actually having to do anything. Suspicion and mistrust allow the cynic to feel justified disengaging from the pain and suffering that is ever-present in the world. If people and politics are a lost cause, then one might as well just check out. The end of this road is apathy, an antonym of charity.

When cynics do get involved, I believe they have a hard time building good things. Most cynics flatter themselves that they are savvier than the naïve rubes who try so hard. But this is ultimately a manifestation of condescension and pride. (It is also often a manifestation of privilege—many people have no other option but to try hard for survival.) So when cynics engage in politics, are they likely to do so with the true charity that comes from seeing each person as a full and complete agent rather than just the object of their scorn? No. Even if they intellectually understand charity, they are not practiced in the humility, curiosity, kindness, and generosity necessary for it. They are, instead, practiced in enmity. In short, cynicism derails us from the path to engaging with humans and the problems of humankind with charity.

How do we fight against the temptation of cynicism and reclaim hope? How do we simultaneously acknowledge the limitations of our ability to effect change while also continuing to try? As someone who has had to fight this battle her whole life, I have developed two strategies. First, I try to discipline myself to remember that I have covenanted to be a person of faith, hope, and charity. That means I don’t get to indulge certain thought processes. I have to identify when I am deviating from my values and do my best to school my thoughts—or at least my behavior—to align with them. People sometimes characterize this strategy as putting one’s head in the sand. But I see the bad very clearly. I have just chosen to approach it as a challenge to address rather than a foregone conclusion. I can (and must) be wise in these efforts, but I can’t abandon them.

Second, I try to remember that cynicism is a defense mechanism. It’s rooted in the reality that when you try, failure is a possible (or maybe even probable) outcome, and failure is very painful. The only antidote I have found for this is to acknowledge my fear and try to remember that God will take care of me. If I truly have faith that the Savior’s Atonement can fix everything, I can have hope that I’ll be okay no matter my embarrassments or inadequacies. That relieves enough insecurity that I can focus on approaching the world with generosity even in the face of uncertainty about the outcomes of my endeavors.

In a passage that I find deeply clarifying and moving, Rebecca Solnit writes,

Hope locates itself in the premises that we don’t know what will happen and that in the spaciousness of uncertainty is room to act. When you recognize uncertainty, you recognize that you may be able to influence the outcomes—you alone or you in concert with a few dozen or several million others. Hope is an embrace of the unknown and the unknowable, an alternative to the certainty of both optimists and pessimists. Optimists think it will all be fine without our involvement; pessimists take the opposite position; both excuse themselves from acting. It’s the belief that what we do matters even though how and when it may matter, who and what it may impact, are not things we can know beforehand. We may not, in fact, know them afterward either, but they matter all the same, and history is full of people whose influence was most powerful after they were gone.3

In other words, uncertainty is filled with possibilities when paired with hope and her sisters. We often repeat the scripture that “faith is the substance of things hoped for, the evidence of things not seen” (Heb. 11:1), but until I began thinking in a disciplined way about hope, I found this conceptual construction confusing. I now understand the scripture this way: true faith leads to substantial action in the direction of the good things we hope for. As we act, we make the as-yet-unseen things we hope for much more likely to appear. Occasionally this happens through reason-defying miracles that come as answers to prayers, but more often it happens through hard work that is inspired, magnified, and sanctified by God.

So, how do I fight against the heaviness that comes from seeing the ugliness of the world? How do I fight the urge to opt out? I remember my faith in God’s perfect love—and its perfect manifestation, the Atonement—and lean into the hope that comes from this. Once recentered on this foundation, I find more space in my soul to take the risk of trying to make beauty out of ashes through patience, sincerity, and love.

Previous:
“The Least of These” 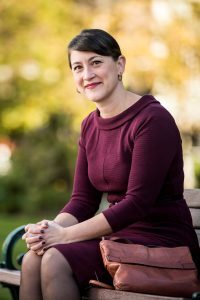 Jessica Robinson Preece is an associate professor of political science at Brigham Young University. Her areas of research and teaching include gender and politics, political parties, and experimental research methods.

1. Mariame Kaba, We Do This ’til We Free Us: Abolitionist Organizing and Transforming Justice, ed. Naomi Murakawa (Chicago: Haymarket Books, 2021), 26–27.

2. I wish to be very clear that it is not always our own agency that points us down the path of fear and self-protection. For example, abuse and trauma can interrupt our ability to respond to situations with trust and hope. That is part of what makes perpetrating them such a serious sin.