Over the Mormon Trail

The Mormon trek from Nauvoo to the valley of the Great Salt Lake is becoming an increasingly popular subject for literary and historical exploration. The contribution of Helen Hinckley Jones in her Over the Mormon Trail is unique in that it combines the clear simplicity and straightfoward language of a work designed for young readers with accuracy and unusual depth of detail and perceptivity.

Mrs. Jones is editor of Reveille for a Persian Village and co-author of Persia Is My Heart, both with Najmeh Najafi.

The subject of this review is a rather brief work of one hundred and twenty-eight pages. It covers a thirty-two year period beginning in Nauvoo, Illinois, in 1845 and continuing to the death of Brigham Young in 1877 in Utah. A final chapter entitled “The Mormon Trail Goes On” entices the reader to yearn for more distant frontiers.

The author includes several phases of the Mormon movement often neglected in works designed for young readers. These include an extensive account of the Pueblo Detachment of the Mormon Battalion, including its arrival at Fort Laramie; a discussion of the efforts made by Joseph Smith to acquaint himself with information about the West; and a penetrating look into the voyage of the ship Brooklyn carrying Mormon immigrants around the horn to California. The latter includes such detail as the sighting of the Cape Verde Islands after being blown off course in a storm, the death of six children during the voyage, and the landing at Mas-a-tierra to take on board 18,000 gallons of water.

The author’s able perception of the character and spirit of Sam Brannan and Brigham Young is implicit in the work. Concerning the early days in the valley of the Great Salt Lake, Brigham Young is quoted as saying: “We will work hard. We will pray as if God were going to do everything for us. Then we will work as hard as if we were going to have to do everything for ourselves” (p. 67).

The handcart companies are given adequate treatment, but it is regrettable that the author makes no mention of the historic passage of the Donner Party through Utah just one year prior to the Mormon Pioneers, hacking out the last thirty-six miles into the great valley which the Saints followed. Two other points should be mentioned, first, the common error of placing the site of the driving of the golden spike at Promontory Point instead of Promontory; and second, naming Sutter’s River as the location of Marshall’s famous discovery of gold in California on January 24, 1848, instead of the American River near Coloma.

The valuable map in the front of the book would be more meaningful to the reader if a date were included since important territorial changes took place between 1847 and 1850, the period largely dealt with in this work.

In spite of the errors mentioned and a few less important ones such as calling P. St. George Cooke Colonel Cooke in one place and Captain Cooke in another during the march of the Mormon Battalion, this excellently written and beautifully illustrated work on the trek of the Mormon Pioneers is an outstanding contribution to the history bookshelf of the young reader. 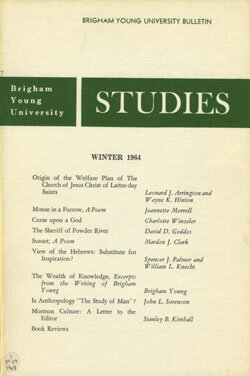 Next:
What Is History?