Photograph of Children Traveling to the Salt Lake Temple Dedication, 1893

In early 1893, the Latter-day Saints eagerly anticipated the dedication of the Salt Lake Temple, the culmination of more than forty years of effort and struggle. To allow as many Saints as possible to participate, President Wilford Woodruff announced that a series of dedicatory sessions would be held. To accommodate the many Sunday School children who had “donated of their means to assist in building the Salt Lake Temple . . . and [had] expressed a desire to visit the Temple at its dedication,” the First Presidency set aside April 21 and 22 for the youth of the Church to visit the temple.1 This photograph shows one ward’s children on their way to the dedication.

Historical Context of the Photograph

Wards and stakes were assigned sessions to attend the special dedication service for children. Three sessions were held on Friday, April 21, and two on Saturday, April 22. This photograph was taken of the Sugar House Ward youth aboard the Main Street train on their way to attend one of these sessions. At that time, the Sugar House Ward covered twenty-two square miles.2 There is some ambiguity as to which day the Sugar House Ward actually attended, however. The photograph itself has “April 22nd” etched onto it, but the Deseret Evening News reports that the ward was scheduled to attend the third session on April 21.3

All children enrolled in Sunday School and under the age of sixteen, even those younger than eight, were invited to attend. Between nine and ten thousand Sunday School children attended the three dedicatory services on Friday,4 and just over four thousand attended the two sessions on Saturday.5 The Deseret Evening News records that “the little ones presented a beautiful and interesting picture today, as they filed into the Temple Block to be present at the dedication services in the Temple.”6

These dedicatory sessions provided priceless experiences for many who attended. LeGrand Richards, seven at the time, attended one of the special Sunday School sessions and credited his experience there for a vision of Wilford Woodruff he had later in life.7 Emmeline B. Wells reported that “the Sunday School children passing through the Temple and joining in the ‘hosannahs’ must have been a sight for angels to gaze upon, and undoubtedly myriads of them were present.”8

Provenance of the Photograph

This is a copy of the original oblong photograph mounted on card stock in the possession of the late Wallace B. Broberg. There were several damaged areas on the original (note the torn image with tape at the top of the photograph). Richard Neitzel Holzapfel made this photograph of the original during a visit to Broberg’s Salt Lake City home in 1995. Since Brother Broberg’s death, his family has been unable to locate the original.

Apparently the original photograph was taken by English convert Charles R. Savage (1832–1909). Although his name does not appear on the photograph, in the lower right-hand corner there is an inscription in his handwriting and his usual style: “Sugar House Ward Children Visiting the Salt Lake Temple April 22nd 1893.” Since the time the photograph was taken, someone has also written on the bottom; “[Ta]ken April 22, 1893. Sugar House Ward then extende[d] from 13 So to 27th So From 5th E. to the mountain in the east.” The original glass-plate negative of this photograph was probably destroyed in a fire at Savage’s studio in 1911.

This photograph is one of few known images of the special Sunday School dedicatory sessions. It is important not only for its rarity but also because it documents a time of transition in Church history. By 1893 the Church had grown in many ways beyond the struggles of the first pioneers. One example of the many changes that had occurred is that for the first time, the Church invited nonmembers to tour the temple before its dedication, perhaps a sign that the Saints no longer feared persecution.

The dedication of the Salt Lake Temple commemorated the sacrifices of the countless Saints who had given everything to see the gospel brought forth in their day. These children, a product of those sacrifices, were going to pay deference to the rich heritage they had been given. 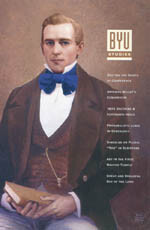 BYU Studies Quarterly 41:2
Next:
The Conversion of Artemus Millet and His Call to Kirtland