Some LDS readers have an intriguing tendency to venerate obviously scholarly research while turning up their noses at what they consider less “academic” work. These readers are missing out on a potentially impactful genre. Eugene England wrote, “It is the personal essay that seems to me to have the greatest potential for making a uniquely valuable Mormon contribution both to Mormon cultural and religious life and to that of others.”1 If that notion is true, reading works like Pat Madden’s collection of personal essays, Quotidiana, should be added to our academic diet to refine and broaden the value we place on a whole spectrum of study.

For readers who wince at the sentimentality of some creative nonfictional writing, Madden’s book might be the ideal transition into the genre. Madden, who was once on a scientific path himself, not only embraces academic research, he joins it with his personal accounts, holding out his hand to readers who crave objective data. The data, the research, and the scholastic theory are all present, but they form a sort of bridge to the more personal applications. While not self-consciously avoiding the spiritual, Madden allows his belief to shape his vision rather than having that belief be his vision. In other words, Madden’s work might not appeal to the Mormon reader waiting for meditations on the Book of Mormon, the priesthood, or Interstate 15. But that just might be a good thing.

Quotidiana speaks to me like a sort of intellectual impressionism. Where impressionism creates perspective from brushstrokes, Madden’s essays employ a wide range of allusions from antiquity to the present that provide a layered perspective to his subject. His is a collection of essays that follows in the rich history of essayists who made “the mundane resplendent with their meditative insights” (4). Unfortunately, though, this comparison to impressionism conjures unwanted images: denimed American tourists milling their tube-socked and sandaled way through the Musée d’Orsay in Paris or ubiquitous posters foisted upon walls and ceilings by tween-aged suburban girls. The light of impressionism’s aesthetic virtues should not be shrouded by contemporary consumer culture’s attempt to postcard it into annihilation. For me, impressionism genuinely represents a perspective of an object rather than attempting an “objective” recreation of it, and Madden’s staggeringly panoramic collection of allusions offers an intentionally wide-lensed perspective. Those who read Madden’s densely allusive prose to find easily epiphanic recollections of life will be as challenged as those who would use impressionist paintings as road maps.

Madden’s allusions are the primary characteristic of this collection of essays and offer more an intellectual imprint of his subject than a comprehensive personalized theme. Madden describes how the personal essay “mimics the activity of a mind at work. It reflects discovery through writing. Its author had better not begin with a conclusion or epiphany already in hand” (68). Madden remains staunchly true to this Montaigne-esque vision of the essay. He invites his readers into his lush, associative mind, which is unique in a creative nonfiction genre filled with confessional memoirs.

In longer essays like “Laughter” and “Remember Death,” I found myself searching through them in the same meandering way I read the encyclopedia as a boy. I discovered then the thirst for understanding—not understanding things in particular, but understanding everything. Reading Madden’s essays reconnected me to the part of myself that led me to teach at a university. Madden’s essays are breathlessly dense with ideas from varied sources on the essay’s topic, taking the reader whirling through centuries of perspectives. I found myself fascinated by the array of knowledge, sources, and ideas that he connects. It is truly a talent. And while this book, written by a Latter-day Saint, is not a group of essays with overtly Latter-day Saint themes, it still has the potential to speak powerfully to those Saints who care about literary quality and are searching for examples of this genre’s expressive possibilities.

In his essay “Garlic,” Madden juxtaposes his father-in-law’s work selling produce in Uruguay, lists of produce sold at the market, a brief history of garlic, his wife’s family, and a thought about the “complexity of interrelationships” symbolized by New York City, wherein the gilded order of that city conceals a lurking chaos. Ultimately, his reflections take us back to the life of his hardworking father-in-law and the difficulty of the interconnections in his life. Admittedly, the virtue of these vast encyclopedic tours of ideas becomes a vice in some of the essays. The wealth of allusions in these connections is stunning; however, I would gladly give up a reference or two to read more of the voice that placed all these references together.

Despite his clear reluctance to wax personal, I found Madden at his best in his narrative writing. He is able to invoke the essence of narrative without using narrative to punish his readers with a moral. In “Remember Death,” Madden manages to bring out references and tie them together with the death of a childhood acquaintance, Wayne Marino. He keeps the essay from falling into a simplistic “I knew I could die too” theme by tracing allusions to the momento mori motif in such varied places as songs from the band Rush to seventeenth-century Dutch painters’ use of a skull in their paintings. The meditation ends with Madden’s move away from cliché in an observation about timing, stating that despite never really liking Wayne Marino much at all, he is “writing this essay exactly seventeen years later, to the day, having survived twice as long as I had then, been whirled through a universe of time and ideas so immeasurably fleet that it may be contained entirely within my memory and repassed, perhaps, in a moment, a sudden flash” (60). This “flash” unexpectedly marries the personal nostalgia of reconnecting with his best friend from home with the images of the skulls in de Gheyn paintings.

In his essay “Hepatitis,” Madden’s mention of his scientific background aids the reader in further grasping his listlike leanings. While the compilation of facts satiates his logical drive, the author and the power of his voice shine when he describes his children’s illness and, in particular, how the disease slowly takes the life of the family dog. Even with all the details about hepatitis, the muscle of the essay comes from its ending where Madden restrains from indulging in a sentimental ending but still maintains the power of the narrative:

I had long ago given up crying over dead dogs, but I cried for Karina [Madden’s wife]. Then Karina is gone to the pet cemetery to witness the burial, to say goodbye one last time, and I am home with the kids, struggling to keep them still, not fighting, out of the fridge, with slippers on their feet. A glance out the front window toward the gate reminds me that the dog is gone. The trees are losing their leaves in May; the winds are bringing cold from the South. Pato’s shoelace is still hanging tied in a square knot from the window latch in the kitchen, in case we have to give another i.v. It’s raining steadily and gray and I can’t get it out of my head how small the dog looked, bent, doubled over and bundled in a white sheet tied at the corners leaning against a tree. (163)

As this final example shows, Madden’s essays invoke an intellectual context to what we see everyday, thereby making his essays at once personal and scholarly. He employs the contemplative and reflective habits essential to the life of a true religious scholar, fulfilling England’s prediction about the essay’s potential contribution to Mormon thought. 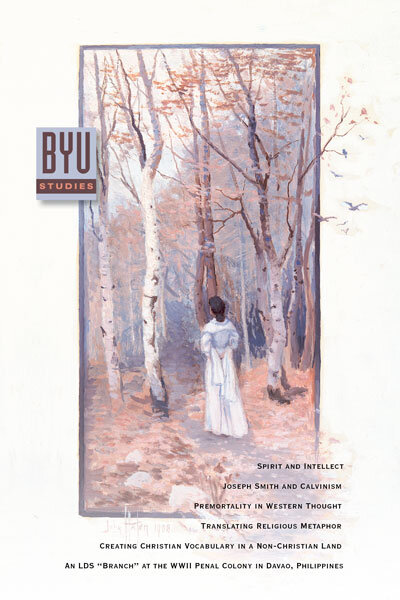 Previous:
Now You See It, Now You Don't

Eric d’Evegnee is Professor of English at Brigham Young University—Idaho.