One of the most difficult responsibilities of a historian is to summarize historical developments without misrepresenting the facts. Therefore, works, such as Winthrop S. Hudson’s Religion in America, that contain generalizations and avoid over-simplifications are most valuable. Hudson’s recent publication is not only the most thorough and lurid one-volume survey of the story of American religious life that is currently available, but it is also one of the best written works on this subject. In addition to inserting in this history numerous thought-provoking explanations of the causes of significant religious developments, he has aptly described the major trends in American religious history and has competently discussed the emergence in this land of new religious societies in light of their historical settings. There is also an excellent balance in this work. Instead of primarily concentrating on the colonial and early national period, Hudson has devoted equal attention to the pre–Civil War period, the post–Civil War era, and the twentieth century. The major concern of this author was not to consider denominational histories nor beliefs of members of American religious societies, but “to depict the religious life of the American people in interaction with other dimensions of their experience.” (p. viii)

Hudson’s description of the progress of religion in colonial America and in the new nation is one of the best summaries that has been written on this subject, and his analysis of religious trends in the twentieth century is the most clear and complete exposition of this difficult topic that is available in a work of this nature.

Although this survey is relatively free from factual errors, a few statements need revising and others need clarification. Hudson incorrectly wrote that “Anglican clergy, with a few notable exceptions, were zealous Tories.” (p. 95) A careful investigation of these religious leaders reveals that a number of Anglican clergy were active patriots or were neutral. Probably about half or slightly more of these ministers were “zealous Tories.” Hudson further mentioned that settlers of various religious persuasions resided in New Netherlands, but failed to state that prior to 1664 only Dutch and English Calvinists were permitted to organize congregations and hold public services in this Dutch colony. In his summary of religion in colonial America, he failed to emphasize that organized religion was neglected by most settlers partially because the vast majority of inhabitants lived on rural farmsteads.

Although no accurate membership figures are available for the colonial period, this reviewer seriously questions Hudson’s conclusion that the Presbyterian society was the second largest denomination in 1776 and that the Baptists and Anglicans were about equal in membership at that time. According to one competent study (Clifford M. Drury, “Missionary Expansion at Home,” They Seek a Country, G. J. Slosser, ed., New York: Macmillan Co., 1955, 169), in 1789 only about 14,000 Presbyterians had gathered into this religious society. Moreover, Hudson includes in this survey estimates of membership in the early nineteenth century that have been widely cited (about 7 percent in 1800 and 12.5 percent in 1835) but then, without sufficient evidence to support his claims, overestimates the Numbers who were attending church during this era by writing that “the number attending a Sabbath service was usually three times as large as the membership.” (p. 129)

Since the emphasis in this work is not on denominational histories, Hudson does not devote much attention to Mormonism, but he does mention the rise of this movement. He is among a minority of non-Mormon authors who have not erred regarding Joseph Smith’s description of the First Vision, and he accurately described most aspects of this history. In relating the migration of the Saints, however, Hudson incorrectly wrote that after the Panic of 1837, the Mormons shifted “the base of operations to Independence and then Far West, Missouri.” (p. 193) And his bibliographical citations on this subject were most deficient. Hudson recorded that “The best biography of Smith is Fawn Brodie No Man Knows My History . . . and the best account of the movement is Thomas F. O’Dea, The Mormons.” These are the only books included in his bibliographical references on Mormonism, with the exception of a reference to Whitney R. Cross’s Burned-over District.

In considering the origin of the Book of Mormon, Hudson cited a theory proposed by Alexander Campbell. Quoting Campbell, Hudson suggested that the Book of Mormon “had anticipated and given a definitive answer to ‘every error and almost every truth discussed in New York for the last ten years.'” (p. 191) In an attempt to prove that the Book of Mormon was not a translated work from ancient records, Campbell (whom Hudson selected as an authority) sought to limit the authorship of this book to an individual living in western New York in the early nineteenth century by listing popular topics of discussion of that period, but these were also subjects which were seriously considered by many people during the Middle Ages and during the era of the Reformation. Many reformers, such as Menno Simons, discussed in their writings nearly all the subjects listed by Campbell and Hudson. Moreover, it is incorrect to state that the Book of Mormon provides a “definitive answer” to subjects such as “ordination, trinity church government, . . . eternal punishment, who may baptize, . . . free-masonry, republican government, and the rights of man.” (p. 191)

Although Hudson failed to defend satisfactorily his position regarding the origin of the Book of Mormon and included a few other errors in his work, this scholar has produced an excellent survey that is, with only a few exceptions, accurate, objective, provocative, and penned in an excellent style. This and other literary contributions of Winthrop Still Hudson place him high on the list of American authors who are publishing competent works in the field of American church history. 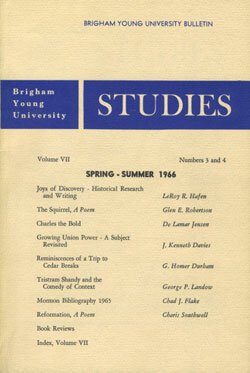 BYU Studies Quarterly 07:3-4
Next:
Nauvoo—Kingdom on the Mississippi