Mrs. Nielsen’s response to Carlton Culmsee’s article “Poetry in the Free World” in this issue.

“Purposiveness outreaching human ends” must be the grandest vision of our time. Fred Hoyle, concluding his book The Nature of the Universe says:

“It seems to me that the greatest lesson of adult life is that one’s own consciousness is not enough. . . . What writer would not like to share the consciousness of Shakespeare? What musician that of Beethoven or Mozart? What mathematician that of Gauso? What I would choose would be an evolution of life whereby the essence of each of us becomes welded together into some larger and vastly more potent structure. I think such a dynamic evolution would be more in keeping with the grandeur of the physical Universe than the static picture offered by formal religion.”

Father Teilhard, in The Phenomenon of Man, defines this high purposiveness as a vision of “psychical expansion,” as “an upsurge of total consciousness for mankind” a coalescence of experience. Father Teilhard rejects the Pantheist’s version of Unity. We must not aspire to fall back into the All like drops of water to a great sea, but rather aspire to greater personalization, so that at last this divine Person, this total consciousness, “Noösphere,” is made up of more perfected and completed minds.

Father Teilhard uses a figure, or metaphor—he talks, as poets should, in metaphor—to clarify his philosophy. (Those who claim poetry and philosophy are inimical should try to find one really good poem which doesn’t embody at least one religious or philosophical viewpoint.) He speaks of the earth as “myriads of grains of thought enclosed in a single vast grain of thought, reflections becoming one vast unanimous reflection.” That is his idea of Unity—a universe made up of reflective particles. “Everything that exists is informed by Mind.” He says also in Phenomenon of Man, “There is less difference than people think between research and adoration.”

The poet might be the bridge, might be the one to bridge the gap, between research and adoration. The poet’s gift is largely the gift of relating objective truth to subjective truth—grains of sand to mountains, grains of thought to Noösphere; grains of sand to thought, mountains to the boundless Mind. This is big talk. How is it to be done in a free world? How is it to be done at all?

I think there may be no such thing as a free world in the usual sense of “free.” Persons may be free.

So what is freedom, for a poet? Wallace Fowlie said: “The poet’s capacity to be amazed is his sign. In order to be amazed the poet has to practice a freedom which is unusual because it is related to everything, the physical world, morality, mythology, God. The practice of this freedom insures the response to the world and everything in it. This is vigilance, attentiveness, lucidity, disciplines an artist needs to accomplish his work.”

The mystic philosopher Boehme, who through Blake, Kirkegaard, Dostoevsky and others is one of the major influences on religious thought of our time, held that chaos is freedom. Chaos is the mother of all that is, of health, serenity, order, fulfillment, as variety is the necessary condition of unity. It may well be that a free world is one in which everything exists for its own fulfillment. There must be no submersion. All things exist as what they are before they are at one! As in Rosetti’s “Woodspurge”

Between my knees my forehead was
My hair was over in the grass
My lips, drawn in, said not alas
My naked ears heard the day pass.

My eyes, half open, had the run
Of some ten weeds to fix upon
Among those few, out of the sun
The woodspurge flowered, three cups in one.

In perfect grief there need not be
Wisdom or even memory
One thing there learned remains to me.
The woodspurge has a cup of three.

The Poet’s freedom is merely the freedom to assume his own being. Father Teilhard talks of the “radical sacrifice of egoism” which essentially means a radical pursuit of self-knowledge. There can be no sacrifice, no renunciation of self until a self worthy of sacrifice has been created. His view is analogous to the view of Kierkegaard when he says that to have capital salvation we must first have capital suffering, from knowledge of capital sin. The great saint is the great sinner whose suffering reaches an absolute. Both are saying that the free person is the self-moral, and the self-created because self-moral. So, although we may speak disparagingly of the Existentialist and his precious Angst, or with bored amusement of the beatnik with his howls of ineffectual rage, we know that anxiety that is not mere paranoia may signify health of the spirit. We know that strife is the necessary condition of being, and that divisiveness, even among Christian sects, is not an evil until it ends in spiritual sluggishness. Contented sloth is a deadlier sin than envy, and ends in dependency. Dependency is a form of death, just as serenity is a form of death. Serenity is not peace. I like to think of peace as Ibsen’s Brand knew it.

For Brand, peace was the power, therefore the freedom, to love the higher purposiveness, God’s purposiveness. Peace and freedom lie in the power to assume responsibility—in anguish if that is the condition—responsibility for one’s own will. His choice, the death of his only son, was precipitated by the knowledge that if he left his parish for the child’s health, irrationality, superstition, madness would take over. The mad girl and her goblins and fairies would prevail over Christian order and discipline. Peace and freedom are bought by sacrifice.

The greatest poets have written about the price of freedom. Faust warns Mephistopheles: “The end I aim at is not joy.” The end was completion of a meaningful personness. This would be his entry to eternity. Dante’s master, Plotinus, made the flight of the Alone to the Alone four times. But Dante admitted “The flight was not for my wing.” Dante may not have entered eternity, but for so long as time has lasted Dante achieved meaning. He knew, as an exile, that to be free is to escape nothing, but rather to enter into human experience with all his passion and all his power to know.

By pursuing his own self-knowledge the poet adds to the knowledge of the universe. Provided he is good enough, strong enough, clear enough in his grasp of the universal store available to him from the treasuries of the past, and good enough, strong enough, clear enough in expressing the new findings of his own live, conscious, striving spirit, he may help to add to the grand vision of total consciousness. Personally I hope this vision can be completed. According to Hoyle, although there is enough hydrogen to last another 50 billion years, sadly to say it will be only another 10 billion years until the sun will have crisped us up. 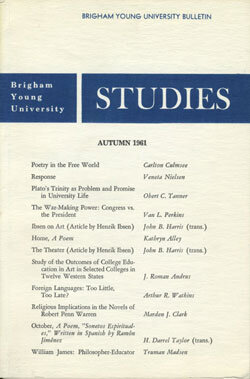 Previous:
Poetry in the Free World

BYU Studies Quarterly 04:1
Next:
Plato's Trinity as Problem and Promise in University Life

Mrs. Nielsen is lecturer in English at Utah State University.