A Study of Their Textual Development

This recent publication by the historian of The Reorganized Church of Jesus Christ of Latter-Day Saints traces the textual development of the Book of Mormon, the “Inspired Version” of the Bible, and the Doctrine and Covenants from the earliest dictated manuscripts to present-day published editions. It is an historical study of the long and sometimes complicated journey that was involved in the transfer of ideas from the mind of the Prophet Joseph Smith to the final recording of those ideas on the printed page. This journey entailed a process of several steps such as dictation to a scribe, transcription, emendation, and revision of pre-publication manuscripts to obtain greater clarity and improved meaning, and also for correction of scribal error, followed by first-edition publication, and finally additional revision and correction in subsequent published editions.

It is Mr. Howard’s observation that there is a difference between revelation from God and the record of that revelation. Scripture is the record of a divine revelation, but not the revelation itself. In continuing this theme, consistent with the evidence of original and other pre-publication manuscripts, Mr. Howard concludes that revelation did not generally come to the Prophet in a mechanical stereo typed manner of exact words and phrases, but rather that the Prophet was revealed concepts which he was obliged to express in his own words. Since all knowledge was not given in a single revelatory experience, later revelations contributed to the understanding of earlier revealed principles. The obligation that was placed on the Prophet to work out his own forms of expression, plus the accumulation of subsequent revelations, necessitated frequent revision and re-working of the original manuscripts to express as accurately as possible what had actually been communicated to his mind. In making these observations Mr. Howard has presented not only an historical review of the scriptures, but also an important concept about how revelation came to the Prophet Joseph Smith and how he then expressed that information in writing.

Howard’s presentation of excerpts from pre-publication manuscripts seems to be ample documentary evidence to refute the David Whitmer–Martin Harris–William Smith reports that the act of translation of the Book of Mormon was a visually projected experience in which Joseph is said to have actually seen the words in the Urim and Thummim and merely copied them.

Mr. Howard also explains that the early manuscripts bear evidence of at least the following three kinds of revisions: (1) the correction of scribal errors, (2) the clarification of ambiguous and poorly worded passages to improve their meaning, and (3) the addition of material that was not in the original draft. These three types of revision are well illustrated in the book by parallel columns and also by actual photo copies of selected pages of the manuscripts. It is demonstrated that first drafts were often inadequate to convey the information in the manner the Prophet desired, and that these specific kinds of revisions were made in the text of the Book of Mormon, in the “Inspired Version” of the Bible, and also in the Doctrine and Covenants.

A study of this kind could only be accomplished by access to original manuscripts. Since these have not been available for general use, we are indebted to Mr. Howard for the publication of his work. The forty-four photo copies and fifty-three parallel column illustrations alone are worth the price of the book. Mr. Howard has a keen ability to observe and to draw meaning out of unorganized material that to a less industrious researcher might appear a hopeless task. This is especially evident from his use of dates, handwriting analysis and historical events in making a technical reconstruction of the procedures of the Prophet and his various scribes in the “translation” of the Bible.

Of considerable interest are discussions of various sub-items, such as the frequency of the phrase “and it came to pass,” use of the term “Urim and Thummim” and the matter of what Joseph Smith meant by his usage of the term “translation.” There are likewise some interesting historical connections having to do with Oliver Cowdery, Sidney Rigdon, and John Whitmer and their services as scribes to the Prophet. The probable influence of the untimely death of Joseph’s brother, Alvin Smith, on the doctrine of baptism for the dead, likewise makes informative reading.

The book also contains considerable information about the revision and correction of the text of the Book of Mormon and Doctrine and Covenants (Book of Commandments) after their initial printings. These corrections and revisions were sometimes by the Prophet himself, sometimes by a scribe under his direction, and sometimes by committees after the Prophet’s death. The “Inspired Version” of the Bible was printed, and to a very minor extent revised, by committees after the death of Joseph Smith.

The book is admittedly complicated, as a work of this nature has to be. It is remarkable that the detailed and complex information is presented as plainly as it is. Penetrating insight and clarity of explanation are two of Mr. Howard’s virtues. In the preface he explains: “This is not a text for casual reading, . . . [but] is a resource text designed for the serious student seeking to grasp the relationships between Church history, revelation, and scripture. . . .” The work is somewhat of a survey although it contains unusual depth and insight, and in many ways it is the only sourcebook of its kind dealing with the background of the particular scriptures of this Dispensation.

Perhaps a few other observations are in order. The book was written primarily for RLDS readers and therefore citations from the Doctrine and Covenants and the Book of Mormon are from the RLDS publications of these works in which chapter and verse numbers differ from the current LDS publications. This may sometimes be confusing to LDS readers.

Another factor needs consideration. On the basis of manuscript evidence Mr. Howard’s conclusions seem to be logical and quite generally correct. However, there is a natural tendency in an intricate investigation of this kind for one to describe with too much finality just how a prophet, seer, and revelator receives divine communication, and likewise to decide what is and what is not revelation. To collect objective evidence is the legitimate business of a scholar. To interpret that evidence is also the work of a scholar, but by its nature interpretation is sometimes subjective. Thus the LDS reader will probably see elements of subjectivity in Mr. Howard’s evaluation of the various documents concerning baptism for the dead and also of plural marriage. However, it should be noted that Mr. Howard also calls attention to some apparent inconsistencies and misconceptions in the traditions and statements of the RLDS.

The book is a major leap forward in the textual criticism of latter-day scripture, although additional research and understanding may someday dictate occasional adjustments in some of the conclusions. Historians, theologians, and serious-minded students of the latter-day scriptures will be glad for Mr. Howard’s insightful, interesting and most informative new book and will wish to have a copy for themselves and become familiar with its contents. 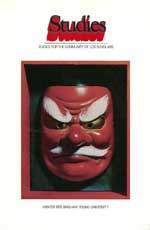 Previous:
The Lion of the Lord