Writing a review of a book by Hugh Nibley is a difficult task; it would be much simpler to do a review of the Encyclopaedia Britannica. Following the pattern of past works, Nibley’s newest book is vast in its scope and depth of many disciplines. Since Cumorah can and should command a large reading audience, as it has interest for the lay reader as well as for the scholar. It challenges the world of scholars to recognize that the Book of Mormon is not only a book of sacred scripture but also a book of history and should be recognized as such—that as a book of genuine history it can stand any test when compared with the historic facts that are known.

Since Cumorah begins with the working hypothesis that in leaving Jerusalem, Lehi’s colony took more with them than their material items. They also took their culture, their language, and their accomplishments with them. Thus it is only to be expected that when they arrived in the new land they would transplant their culture in the new land. If this hypothesis is correct, then the Book of Mormon is a record of a transplanted culture, and this should be evident in its pages.

Nibley spends some time on the problem of “Higher Criticism,” and I cannot but agree with his remarks. There is no doubt in my mind as I read the Hebrews or Greek texts of the Bible that there are many problems in the text. Yet I cannot believe that anything is solved by subdividing books and multiplying authors. For as I read the text, I come to the same conclusion as Nibley, that there is a deep unity of the text, a unity that could not be accomplished had there been many authors for each book. W. F. Albright has pointed out that “our Hebrew text has suffered much more from losses than from glosses” (p. 26). Nibley goes on to show that the “misunderstanding of the scripture is not due to corruptions of the text but rather to serious omissions and deletions” (p. 26). It is not difficult to prove that the Isaiah passages in the Book of Mormon are not lifted en masse from the Bible, and that they do indeed correct many of the mistakes that are found in our present-day Bible. Nibley so well points out, “We have discovered that the Book of Mormon is actually way out in front in proclaiming the unity and explaining the diversity of scripture in general and Isaiah in particular” (p. 152).

I found of particular interest that section of Since Cumorah which deals with “Proper Names” (p. 192). The Book of Mormon is a philologist’s gold mine due to the number of proper names that are found in the work. Nibley pointed out long ago that the proper names in the Book of Mormon have West Semitic and Egyptian counterparts. In this newest work, Nibley adds to his already long list of names. It is a shame that none of the scholars have approached the Book of Mormon from this point of view, for the evidence that is compiled in Since Cumorah is most convincing, and I look for a continuance of this work.

One of the more fascinating sections of the book is a comparison of the religious concepts that are to be found in the Apocrypha with those of the Book of Mormon (p. 174). Such ideas as, “These Arrayed in White,” “Thanksgiving Hymns,” and “Desert Imagery” are handled. There are many points of reference between the two works, and it seems strange that we had to wait so long for Nibley to bring them forth. His points are generally well given and deserve to be looked into. However, some of his points in this section appear to be overdrawn and grasping at straws in the wind. It is pointed out that “the Book of Mormon reflects the culture of the whole Near East of its day” (p. 55). For this reason it is imperative that we study the Apocrypha and the Dead Sea Scrolls. This point, I think, is the great contribution of Since Cumorah.

In yet another section Nibley handles a subject that has been for too long neglected—temple building in the Book of Mormon. This has been an insurmountable problem to many members of the Church as well as the world of scholars, for there has been a widespread conviction that “no real Jew would ever dream of having a temple anywhere but in Jerusalem” (p. 59). But this we see is not the case, for there were temples built by Jews outside of Jerusalem. Nibley points to the famous Elephantine Papyri to show that there was a Jewish temple in Egypt. There is no longer a need to reject the temple building of the Book of Mormon as being out of place for it appears that the “Covenant People” have always been a temple-building people.

I have found the book to be an excellent introduction to many problems that until now never have been discussed. The introduction to each section is excellent and is handled in the usual excellent style of the author. But I feel that many of the sections that start out well fail to maintain this momentum because many of the points are overdrawn; the reader is often overburdened with irrelevant facts. It is also unacceptable in any scholarly work to omit a bibliography and scriptural index. This in no way detracts from the intrinsic value of the book, but it does make it a less valuable scholarly tool.

It should be stated that Since Cumorah is not a problem-answer book. This is not Nibley’s method; for he states his hypothesis and then gives supporting evidence, leaving the reader to draw his own conclusions from the evidence. In this manner the questions are left open-ended and the author invites further discussion.

In conclusion I must say that I found the book to be generally excellent, stimulating, and very worthwhile. I can only agree with Nibley that the Book of Mormon “enjoys no immunity to the severest tests and asks for none” (p. 44). Truths need no immunity. My only hope is that the scholars who have been so critical in the past will take up the challenge given them by the author to prove or disprove his original hypothesis. 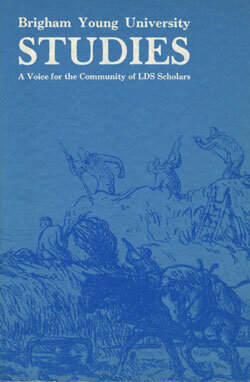 BYU Studies Quarterly 08:4
Next:
The Faith of a Scientist