Spaces in the Sage

It is very difficult, in the realm of poetry, to distinguish the line that separates the amateur from the professional. (Certainly money is no criterion here as it is supposed to be in sports!) Wherever that line may be, however, it is very clear that Emma Lou Thayne has crossed it.

This reviewer had the opportunity of reading a number of Ms. Thayne’s earlier poems prior to studying this volume. The earlier poems were clever and delightful, the poet writes with the clear, firm authority of the professional. Her work includes some of the most readable and most polished poems ever to come out of this region. Several of them can stand in company with the best modern poetry being written in America today.

One thing that bespeaks the professional is a distinctive style. Readers who give their attention to the poems of Spaces in the Sage will hereafter be able to spot the poet’s work very quickly for its special proportions of toughness and tenderness, its use of rich yet carefully selected detail, its controlled humor, and its explosive quality. “Explosive” is used here to suggest the light that suddenly flashes in the reader’s mind, usually at the completion of a poem, and almost always in a manner unexpected. Lesser poets, attempting the same impact, often “manipulate” their poems. Ms. Thayne, however, makes the poem do its own work: the explosion occurs because the poem lights the fuse.

Vigor is another characteristic of Ms. Thayne’s work—vigor of style as well as of content. Her images move with an energy of their own: “Purple flowers spilled like sawdust,” “. . . you . . . would tire of pink and spit back seeds of black,” “I hang on, arms full/knees gripping leather flesh . . . ,” “Frantic legs jack hammering. . . .” Even inanimate objects are treated with energy, such as the dam at Lake Powell: “Sheared semi-straight/ Sides primed and polished with a palette knife. . . .”

Ms. Thayne uses skillfully a technique now being experimented with by leading contemporary poets. In their concern with the individual poetic line, not only as an organic part of the total poem but as an experience in itself, they are trying to learn what kind of useful ambiguity and texture they can get by dividing the lines of a poem in an unexpected way. Done ineptly, such division just produces red herrings. But done well, it gives us added connotations—relevant connotations—without added words. Take this stanza from Ms. Thayne’s excellent poem “Cheyenne.”

What chance has any driver
floating at a wheel turned
silken by an hour of ancient sirens
singing urgent in the dark.

Each of the first three lines has a slightly different meaning when read alone than when read in context. “What chance has any driver” is a statement that has tragic force all by itself, given the death toll on our highways. “A wheel turned” suggests the physical turning—an idea crucial to this poem about decision. But in context, it also operates as “a wheel turned silken,” a different, metaphoric concept. The ancient sirens are at first ambulance or police sirens, working well with “what chance has any driver,” but in the next line the sound becomes the song of mythical sirens.

There are many other things to commend about this volume. There are also a few things one might find fault with. Except for the poem “Waiting,” the very short, abstract poems strike this reviewer as unsuccessful. But one point seems especially important. The content and style of these poems will be accessible and interesting to readers with very little experience in the reading of serious poetry. “Huckleberry Hunt,” the Lake Powell poems, “Manchild,” virtually all of the poems deal with familiar material. They are poems that could (and will) be read across the pulpit or in family home evenings, yet—and this is the crucial point—they will achieve this popularity without compromise. They are examples of first-rate poetry, professional and of consummate artistry. As such, who can estimate their power for good among the philistines? 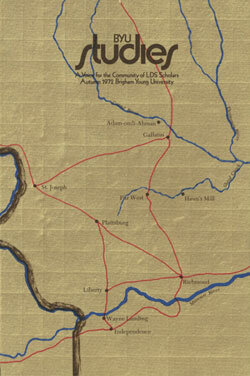