The United States is properly recognized as a land of religious pluralism. The people of this nation probably support more different religious societies than do citizens of any other country. Pluralism is also a characteristic of the patterns of belief of members of many denominations for within many congregations a wide variety of beliefs exists.

In an attempt to present “to Catholics” a description of the theological diversity dividing Protestants, Robert Campbell has compiled a most revealing work, Spectrum of Protestant Beliefs. He says, “Significant divisions in Protestantism no longer are along denominational lines, but rather depend on the orientation of the individual in the liberal conservative spectrum” (p. v). As one Lutheran Protestant minister confessed, “Frankly, I feel closer to a liberal of any denomination than I do to a conservative of my own denomination” (p. vii).

For organizational purposes, Campbell divided “the left-to-right spectrum” into “five bands” which he calls radical, liberal, confessional, new evangelical, and fundamentalist. Then he selected five prominent religious leaders to represent these schools of thought and to express their beliefs concerning a variety of subjects including God, the virgin birth, the Bible, original sin, Satan, heaven and hell, what a man must do to be saved, marriage and divorce, premarital sex relations, racial integration, the ecumenical movement, and Vietnam.

Rev. Bob Jones, president of the Bob Jones University in Greenville, South Carolina, aptly represented the fundamentalist position; Carl F. H. Henry, editor of Christianity Today, spoke effectively for the new evangelicals; Dr. John Warwick, chairman of the division of church history at Trinity Evangelical Divinity School in Deerfield, Illinois, accepted the assignment to represent the “confessional segment of the spectrum”; Bishop James A. Pike, theologian-in-residence at the Center for the Study of Democratic Institutions, Santa Barbara, responded to the request of articulating the view of a liberal; and William Hamilton, professor of religion at New College, Sarasota, Florida, elucidated views of radical theologians. All of these scholars prepared excellent, lucid, and succinct descriptions of their beliefs.

One of the apparent problems involved in preparing a work of this nature for publication was that of locating a theologian who might be recognized as a spokesman for a particular band of Protestant theology. This problem was especially difficult when the editor considered the liberal, confessional, and the new evangelical schools of thought. Campbell recognized that not every Protestant would fit neatly into one of the groups in the five-fold division of the Protestant liberal-conservative spectrum and noted that an individual might be conservative regarding one subject and liberal on another. Consequently, not all who might classify themselves as a particular type of Protestant would agree with the statements of the selected representatives for the various bands in the spectrum. This is especially true of the liberal school of thought. In fact, the controversial theologian, Bishop Pike, who was selected to represent the liberal band in the spectrum, is regarded by many liberal ministers with whom I am acquainted as a radical. Therefore, in the opinion of many liberal Protestants, two radicals express their views in this work; and many popular beliefs of the liberals are not reflected in this publication.

Another organizational feature of this work that should be seriously questioned is the establishment of a band in the spectrum labeled confessional. While many Protestants might classify themselves in this school of emphasis, this work was designed to reveal the different theological positions of Protestants, and confessional Protestants are not united by belief. Instead, they emphasize the liturgy and the creeds, but disagree concerning the interpretation of the creeds. As Dr. John Warwick, the representative of the confessional spectrum specified, “Doctrinally, confessional Protestants cover the spectrum from center to right [and might have said from left to right]: some are highly orthodox, accepting such key points of high orthodoxy as the reality of Satan and the Second Coming of Christ; others question this or that traditional doctrine, and some verge on the rejection of the physical reality of the Virgin Birth of Christ. Rejection of this would locate a person in the liberal camp.” Since there is so much doctrinal diversity among confessional Protestants, this group might have been omitted in a consideration of patterns of belief, except for a reference to and description of this particular school. No one man could have been selected to represent the doctrinal position of this group of Protestants on the issues considered in this publication.

Although one might adopt another system of classification of Protestants by employing four labels (radicals, liberals, orthodox or conservatives, and fundamentalists), many liberals would divide liberalism into a variety of schools such as the followers of Paul Tillich, Karl Barth, Richard Niebuhr, and Rudolf Bultmann.

Another weakness of the publication is the failure of the editor to summarize more fully some of the most significant doctrinal differences separating the different groups of Protestants. Brief explanations of the positions of the five representatives concerning their schools of thought were included, but a more comprehensive description of the conflicting patterns of belief concerning the Bible, life beyond the grave, the fall, the atonement, and other subjects considered in this publication would have been most helpful to the class of readers for whom this work was prepared.

Although there are organizational problems in Spectrum of Protestant Beliefs (problems which plague all men who prepare a summary of patterns of belief), Campbell has compiled a most interesting work that accomplishes the primary goal of the editor, that of emphasizing the tremendous variety of belief in modern America and of presenting to lay members a brief description of some of the more popular views held by American Protestants. 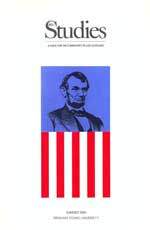 Next:
Spectrum of Catholic Attitudes