Adam Miller’s work Speculative Grace deserves more than one reading. In essence, it is metaphysical poetry utilizing Bruno Latour’s writings to approach theology outside of a traditional, theistic, and orthodox worldview. Latour’s avant-garde, object-oriented philosophy (OOP), in brief, analyzes the components, forces, limitations, and interactions of material objects in an ordinary universe. Paradoxically, Miller’s work uses a nontheistic worldview to discuss theology in order to break the hold of conventional thinking about grace. Reminiscent of how the Roman epicurean philosopher Lucretius poetically promoted Epicurus’s Greek ideas to a Roman audience in his De Rerum Natura, Miller’s hypotheses about OOP are grounded in the nuances of Latour’s multidisciplinary studies and are adapted to the subgenre of philosophical writing.

Miller introduces the Latourian notion that the essence of grace is in all objects—not only in the unconditional gift of a transcendent deity. Miller envisions grace as emanating from all objects, including all material things. The expression of work and suffering, agency and evil are found in the interactions of equal objects within a democratically structured cosmos. Erudite Latin terms such as a tergo progressively occupy space in the text alongside mundane terminology, such as “black boxes,” to become the flat objects found in Miller’s interpretation of Latour.

At some points, the reader may wonder if Latour would even agree with Miller’s grandiose characterizations of his work. Unfortunately, these object-oriented terms are not defined clearly, nor are examples given to reinforce the meaning of OOP in relation to the theology of grace; something more concrete would help many curious readers to fully perceive and appreciate Latour’s worldview. In fact, it might be disconcerting for some readers that Miller, from the outset, often discusses the details of Latour’s work before explaining its basics or central themes. Apparently, Miller uses words as objects to paint Latour’s view of the world; details and themes consciously or subconsciously are all on the same OOP playing field. While a lack of examples may frustrate the ability of many conscientious readers in their efforts to understand this playing field, other readers might find Miller’s abstract style a proper vehicle for exploring Latour’s abstract philosophy, which evolves into a theology compatible with some principles at home in Christianity, including Latter-day Saint doctrines.

On my first reading, the work seemed so abstract that I wondered what religious and philosophical traditions were being jettisoned, misunderstood, lauded, promoted, or approved. Furthermore, I would have welcomed more help in understanding the value of Latour’s OOP thinking and Miller’s interpretation of it. However, after my second and third readings, I noticed that the materialistic universe envisioned by Latour and subtly proposed by Miller is in harmony with the restored gospel’s ability to encompass “small-scale, localized” objects (3) that are both spiritual and material (D&C 131:7–8). For Latter-day Saints, spiritual and temporal things maintain a close interplay (Mosiah 2:41; D&C 29:32).

Instead of recycling thoroughly explicated notions of grace from orthodox Christianity, Miller presents an object-oriented force of grace that permeates all these equal things. This flat structure of the universe is the context in which Miller consistently animates the principle of grace. Miller’s grace is pluralistic, immanent, dynamic, and even ordinary, thereby transforming its meaning to enliven it with heightened relevance.

Because he sidesteps theological controversies about grace in Christian history, Miller is able to make his way back to the original Greek meanings of grace, or charis, which were also quite ordinary, all encompassing, reciprocal, and “double-binding” on the ancient giver and recipient. Miller’s grace could function in LDS and certain other theologies in the sense that an anthropomorphic God is able to have relationships, grant blessings, and make covenants with his children. As Miller explains, “God is an object among a multitude of objects” (47), or, to use a saying commonly attributed to Lorenzo Snow, “As man now is, God once was; as God is now man may be.”

Miller’s novel uses of other theological terms, including faith, charity, prayer, grace, religion, and angels, especially near the end of his poem, seem to subtly reveal his LDS background. The first-person thought that religion “requires that I be faithful to the grace of what has already been made available” (127) perhaps presupposes LDS nuances concerning the nature and importance of the Atonement and the reciprocal making and keeping of covenants by faithful believers.

In the final chapters of Speculative Grace, Miller explores the limitations, strengths, problems, and potential benefits of religion and science in an OOP universe of competing and equally important objects. Miller’s science-versus-religion analysis warrants the attention of readers of any religious or nonreligious persuasion seeking to understand the competing claims of metaphysical authority in the modern world. After considering Miller’s points, many readers may feel the need to reassess their thinking about the proper spheres of both science and religion.

Miller’s explorative work will undoubtedly generate interest and discussion in select philosophical circles. In its paperback version, it may serve as an inexpensive college textbook for modern philosophy or even serve as a guide for those interested in learning more about the possible theological implications of Latour’s notable ideas. Those who are invested in LDS scripture and theology might puzzle over terms and ideas that appear to go too far in favoring a flat universe in which God is simply one more object. Latter-day Saints understand that “God is above all things” (D&C 88:41) and that wherever two spirits exist, one is “more intelligent than the other” (Abr. 3:19). Miller has surely reconciled in his mind the tension between scriptural hierarchy and Latour’s distaste for vertical constructs, but many LDS readers are likely to see at least as much tension here as reconciliation. Overall, I suspect that Speculative Grace will have limited influence in the LDS community because of its poetically abstract and example-free presentation of object-oriented philosophy. Nevertheless, for those willing to explore in this direction, Miller’s work beckons them to careful and thoughtful reflection. 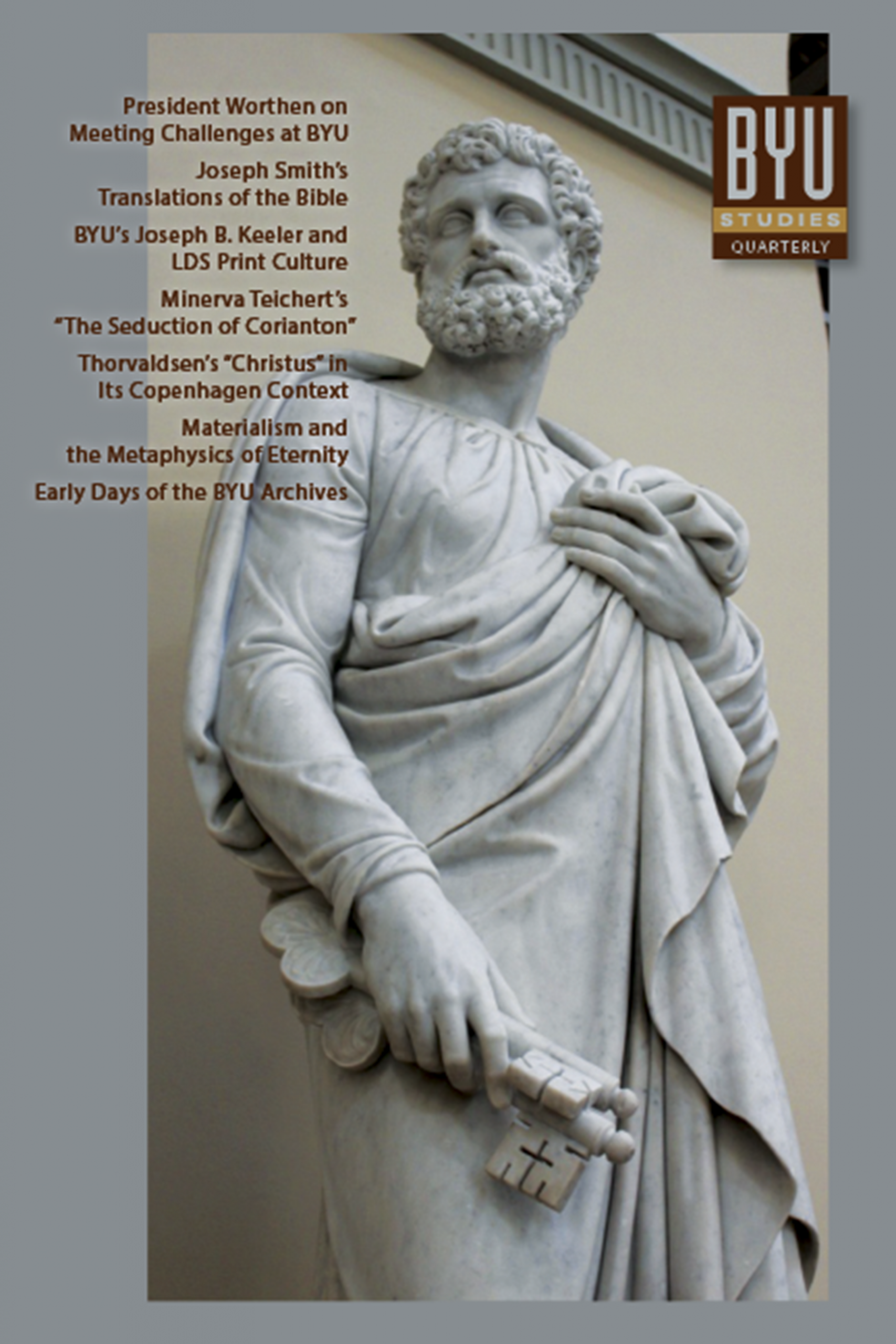 Previous:
Roads in the Wilderness

Brent J. Schmidt teaches at Brigham Young University–Idaho in the religious education and humanities/philosophy departments. He earned degrees in history and classics from the University of Utah and a PhD in classics from the University of Colorado—Boulder. His research interests include patristics, New Testament studies, and ancient and modern utopian communities. His publications include “Temple Elements in Ancient Religious Communities,” BYU Studies Quarterly 50, no. 1 (2011): 127–53, and he will publish a work about the linguistic and doctrinal history of grace or charis entitled Relational Grace through BYU Studies later this year.