Several scholars have identified Psalm 24 as a temple liturgical hymn.1 Sigmund Mowinckel, for example, believes that Psalm 24 contains leges sacrae, or “laws of the sanctuary,” those “special rules and special demands as to the qualifications of those to be admitted” into the temple.2 Speaking specifically of Psalm 24, Hans-Joachim Kraus states that we “must reckon with the presence in the Psalms of concepts connected with the sanctuary of the Ark.”3 Additionally, scholars have considered how God’s presence in the temple is demonstrated in Psalm 24. Leopold Sabourin has discussed Psalm 24 and “God’s theophany in the sanctuary,”4 and Kraus avers that “the liturgy of Psalm 24 celebrates Yahweh Sebaoth, the God of Israel, who is entering the sanctuary. . . . He is accompanied and surrounded by the ‘righteous’ (vv. 3–5), by the ‘true Israel’ (v. 6).”5

Internal evidence clearly connects the psalm to the rites of the ancient Jerusalem temple. For instance, the hymn contains a number of technical terms and expressions which are associated with the Israelite temple and temple worship, such as mountain of Yahweh, holy place, ascend, rise up, innocent, pure heart, lift up, seeking God’s face, gates, entrances, king, glory, and eternity. The psalm also functions as a type of self-administered temple recommend interview in the form of a description of the ideal temple visitor (v. 4), and the creation scene plays a prominent role in the opening verses 1–2.

Although scholars have noted several temple connections in Psalm 24, they have overlooked a possible reference to a prayer circle. English translators have rendered Psalm 24:6 as follows:

This is the generation of them that seek him,
that seek thy face, O Jacob (King James Version).

Such is the generation of those who seek him,
who seek your face, O God of Jacob (New International Version).

Such are the people who seek him,
who seek your presence, God of Jacob (Jerusalem Bible).

The One of Eternity seek,
O you who search for the Presence of Jacob (Anchor Bible).

Such is the fortune of those who seek him,
who seek the face of the God of Jacob (New English Bible).

Such is the people that seek him,
that seeks your presence, God of Jacob (New Jerusalem Bible).

Such is the company of those who seek him,
who seek the face of the God of Jacob (New Revised Standard Version).

Based on further study of the Hebrew text, I propose the following translation of verse 6:

This is the circle of them that inquire of him,
that seek the face of the God of Jacob.

I offer the following translation of Psalm 24 to place verse 6 in the full context of this temple hymn:

1. A Psalm of David
The earth and its fullness belongs to Yahweh,
the world and they that dwell in it.

2. Because he has established it upon the seas,
and upon the rivers he founded it.

3. Who will ascend into the mountain6 of Yahweh?
And who will rise up in his holy place?

4. He whose palms7 are innocent,
and whose heart is pure,
who has not lifted his soul8 to falsehood,
and has not sworn what is false.

5. He will lift up9 a blessing from Yahweh.
And righteousness from the God of his salvation.

6. This is the circle of them that inquire of him,
that seek the face of the God of Jacob. Selah.

7. Lift up10 your heads, O gates,
and be lifted up, O entrances of eternity,
so that the king of Glory will come in.

8. Who is this11 king of glory?
Yahweh, strong and mighty.12
Yahweh, mighty of battle.

9. Lift up your heads, O gates,
and be lifted up, O entrances of eternity,
so that the king of Glory will come in.

My translation of verse 6 is based particularly on the following observations.

When the text of the Hebrew Bible was originally written, only consonants were used, no vowels.13 Indeed, a statement attributed to Natronai II ben Hilai (Gaon of Sura, AD 853–58) states that the vowels were introduced by the sages “as an aid for reading.”14 Approximately two centuries later, Hai Gaon (d. AD 1037) wrote that “a scroll of the law [the Pentateuch or five books of Moses] provided with punctuation cannot be employed for public reading . . . and the reason is that Moses wrote the law for Israel without any [vowel] point[s].”15

Because the vowels were introduced by the Masoretes of Tiberius (9th century AD), they may or may not reflect the intent of the original biblical authors, as has long been recognized. The addition of the vowels is sometimes interpretative.16 By way of comparison, the Dead Sea Scroll versions of the Old Testament (2d century BC to 1st century AD) are an earlier form of the text, and do not have vowels. Thus it is customary for a translator to study the Hebrew Bible both with and without the vowels—with the vowels to view the opinion of the Masoretes and without the vowels to explore other possible understandings of the text.

In Psalm 24:6, the Hebrew word dôr can be rendered “generation,” as many English translators do, accepting the vowel pointing of the Masoretes. Simply by changing the Hebrew vowel from a ḥôlam to a sharûk (an acceptable practice when translating the Hebrew Bible), the word dôr (generation) now reads dur (circle). Such a rendition is supported by Hebrew lexical materials.17 And in the light of the temple setting of this psalm, the term circle fits that context well and may have reference to a religious prayer circle.18

The Syriac Old Testament and the Septuagint supply the word God (Hebrew, Élôhîm) in the verse between thewords Jacob and face. For one reason or another, the Hebrew Bible has omitted this term from the verse. Without this emendation, the text makes little sense, for the entire context revolves around the goal of the worshipper to seek the face of God.20 As noted in the translations listed above, most translators have accepted this alternate reading and have supplied the term God in their translations.

In conclusion, the larger context of Psalm 24 works nicely with my proposed understanding of verse 6. Verses 1–2 make direct reference to the creation of the earth; then follow two synonymous clauses placed in an interrogative format that are directed to the temple worshipper. In essence, the two questions ask, “Who is worthy to visit the Lord’s temple?” The individual found worthy to enter the temple (i.e., “he whose palms are innocent, whose heart is pure, who has not lifted his soul to falsehood, and has not sworn what is false,” v. 4) will receive a blessing from God. What does the blessing consist of? The blessing is implicit in verse 6. After being found worthy to enter the temple, a circle of worshippers participates in the rites and ceremonies, including prayer, where the temple visitor “inquires” after the Lord and “seeks his face.” The blessing, then, is that those individuals worthy to enter the temple will have the privilege of appearing before God in his temple.21 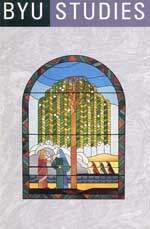 Previous:
Crown-6 and the Future

BYU Studies Quarterly 32:4
Next:
The Trials of Jesus and Jeremiah

Donald W. Parry is Assistant Professor of Hebrew in the department of Asian and Near Eastern Languages, Brigham Young University.

7. The Hebrew term capaim has reference to the “palms.” KJV’s incorrect usage of “hands” does not adequately allow for the significance of palms in ancient Israelite temple ritual. The Hebrew word yad refers to the hand and fingers; figuratively it indicates power or work (as in “the hand of the Lord”); the capaim, however, are the palms, the cupped part of the hand, used to depict innocence and to clap for joy. These two words are interchangeable in the expression upraised hands, a gesture which accompanied prayers in the temple of Solomon.

8. The text of Biblia Hebraica Stuttgartensia reads “my soul.” I emend the text according to the Cairo Geniza manuscripts and numerous variant textual readings to “his soul.” The third person singular his is consistent with the context of the Psalms.

10. Compare the second Haggai of this parallelism, “be lifted up” which is a rare passive command form. The author is using the same Hebrew verb nasa twice, once in an active verbal form and once as a passive verbal form.

11. The expression “this” serves enclitically to demonstrate the physical nearness of Deity to the worshipper.

13. “The Semitic alphabet had no symbols for vowels, only for consonants. However, to remove ambiguity from pronunciation and meaning, a secondary system of vowel notation was developed for Hebrew by about the tenth century CE.” Keith Schoville, “Hebrew for Bible Readers: Starting with Aleph,” Bible Review 7 (June 1991): 16. Christian D. Ginsburg, Introduction to the Massoretico-Critical Edition (New York: Ktav, 1966), discusses the history and evolution of the Hebrew vowel signs (pp. 455–56). For a detailed discussion of two late competing biblical textual traditions, one belonging to the Babylonian Jews (called the Eastern Recension) and the other belonging to the Palestinian Jews (known as the Western Recension), see Ginsburg, Introduction, 197–240. Each school of textual critics held different approaches to adding vowels to the Hebrew Bible. For other scholarly works regarding the voweling of the Hebrew Bible, see Israel Yeivin, The Hebrew Language Tradition as Reflected in the Babylonian Vocalization (Hebrew), 2 vols. (Jerusalem, 1985); and E. J. Revell, Biblical Texts with Palestinian Pointing and Their Accents (Missoula, Mont.: Scholars Press, 1977): 7–34.

16. “Interpretation begins not with the writings separate from the Old Testament; it does not even begin with the pointing of a text. It begins with the choosing of consonants in Semitic manuscripts.” James H. Charlesworth, “The Pseudepigrapha as Biblical Exegesis,” Early Jewish and Christian Exegesis: Studies in Memory of William Hugh Brownlee, ed. Craig A. Evans and William F. Stinespring (Atlanta: Scholars Press, 1987), 140. See also Chiesa, Emergence of Hebrew Biblical Pointing, 9–35.

19. Brown, Driver, and Briggs, Hebrew and English Lexicon of the Old Testament, 205.

20. An alternate reading produced by T. H. Gaster, who puts veakev for ya’akov and thus produces this reading: “and the reward of those that seek him is his face,” cannot be supported. See Vetus Testamentum 4 (1954): 73–79.