The British Contribution to the Restored Gospel

In 1987, BYU Studies published two special issues on the 150-year history of the LDS Church in Great Britain. Robert D. Hales, then Presiding Bishop of the Church, presented these remarks on January 17, 1987, at a symposium at BYU, “The Church in the British Isles, 1837-1987.” He surveys the role of Great Britain in world history, looks at converts to the Church in the 1800s, and tells the stories of several of his own English ancestors who immigrated to the United States and joined the Church. Here is an excerpt from his remarks. The full article is available to download.

The celebration of 150 years of The Church of Jesus Christ of Latter-day Saints in the British Isles provides an opportunity to recognize the contribution of the English to the laying of the foundation for the restoration of the gospel in the last days and the divine intervention in its history.

From that damp and foggy island in Western Europe sprang a tenacity for truth and freedom whose influence has been felt around the world. The influence of modern English is remarkable. The world-wide spread of the language has no precedent. Spanish and French, Arabic and Turkish, Latin and Greek have served their turns as international languages, but none has come near to rivaling English. Today, 330 million people throughout the world speak it as a mother tongue. Add to this those who use English as a second language, and you approach one billion English speakers. It is spoken in more countries than any other language. It is the language of international shipping and air travel, of science and diplomacy. How has this happened? Partly through the power of Britain in the nineteenth century and of America in the twentieth.

We now recognize the great and significant contribution the English-speaking peoples of the world have made in the restoration of true Christianity to the earth, motivated by their indomitable pursuit for truth and religious liberty. Despite difficult financial times in Kirtland, the Prophet, through revelation, called the first missionaries to England. The missionaries left their Kirtland homes on 13 June 1837 and landed in Liverpool on 19 July. Thus commenced the restoration of the true gospel in the British Isles, and coincidentally in the same year that Victoria came to the throne. In this year of 1987, we celebrate 150 years of missionary labors among those great people.

These stories of pilgrims, converts, pioneers, child immigrants, and pioneer missionaries show the devotion, sacrifice, and dedication of our forebears. Is anything less required of us to meet today’s challenges and endure to the end? 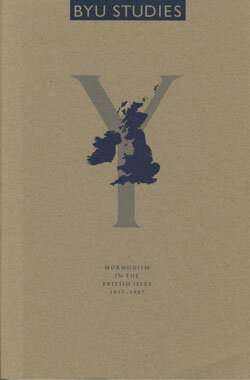 Previous:
A Declaration to the World