The Christus in Context: A Photo Essay

Among the many good reasons to go to Copenhagen, Denmark, is to experience firsthand the famous Christus statue by Bertel Thorvaldsen (1770–1844) in the Vor Frue Kirke (The Church of Our Lady), the Lutheran Cathedral of Copenhagen. While this classic sculpture of Christ, in stunning white Carrara marble, would be impressive in any setting, it is especially meaningful and emotive in its original architectural setting.1

Many circumstances providentially welcomed the Apostle Erastus Snow when he and three other missionaries arrived in 1849 in Copenhagen, the first missionaries of the Restoration to set foot on the continent of Europe.2 Most significantly, only months before their arrival, the Danish constitution had been adopted,3 containing one of the most progressive provisions guaranteeing religious liberty ever to be adopted. This significant constitutional development was the first in the world to follow the Constitution of the United States, fulfilling a hope expressed by Joseph Smith that “all nations [will adopt] the God given Constitution of the United States as a palladium of Liberty and & equal Rights.”4

While the Danish population languished religiously, Søren Kierkegaard (1813–1855) had begun publishing in the 1840s such masterpieces as Either/Or (1843), Edifying Discourses in Diverse Spirits (1847), Christian Discourses (1848), and Sickness unto Death (1849). His works had people in Copenhagen wondering about what it means to do good, to be human, and to follow Christ. A few years earlier, in 1837, Hans Christian Andersen published his first book. That book included “The Princess and the Pea,” “The Little Mermaid,” and “The Emperor’s New Clothes.” Andersen had been born in 1805, the same year as Joseph Smith. His famous tales are much more than fairy tales and are better described as moral allegories that still seek to improve moral sensitivities today. In addition, “folk imagination in Scandinavia by 1850 had already been quickened by the growing number of” books and travel memoirs about America.5

Also welcoming the Mormon arrivals was Thorvaldsen’s Christus statue, which had been commissioned during the artist’s 1819–20 visit home to Copenhagen from Rome. The plaster cast of the Christus was present for the dedication of the Copenhagen Cathedral on June 7, 1829.6 The completed marble statue was then brought into the cathedral in November 1833 and was consecrated on the Feast of Pentecost in 1839.7 On one occasion, Apostle Erastus Snow sat through a service there and mused, if the statues of Christ and his Apostles were alive, what they might say to the archbishop and his clergy.8

As these missionaries entered the church, they would have been greeted by the outstretched arms of the Savior standing before them. The view from the entrance offers a clear line of vision to the Christus. Looking up from the altar, the viewer feels embraced in the extension of the semicircle formed by his welcoming arms. This is not the typical altarpiece or the normal portrayal of the crucifixion of Christ that stands behind the high altar of many European Christian churches.9 Here is the resurrected Lord, showing the signs of the crucifixion in his hands, feet, and side. He stands in glorious white, alone, the Redeemer in whom salvation is found.

Along the side walls of the cathedral are statues of twelve Apostles, six on each side. They are positioned on pedestals on the floor, right next to the pews, giving worshipers the sense that these holy men are in the congregation flanking all the church members. Thorvaldsen personally sacrificed to enable these statues to be completed in the same marble as the Christus.10

On the congregation’s right is Peter, holding the keys to bind on earth and in heaven. He alone is looking steadfastly forward to the statue of Jesus, his Master. 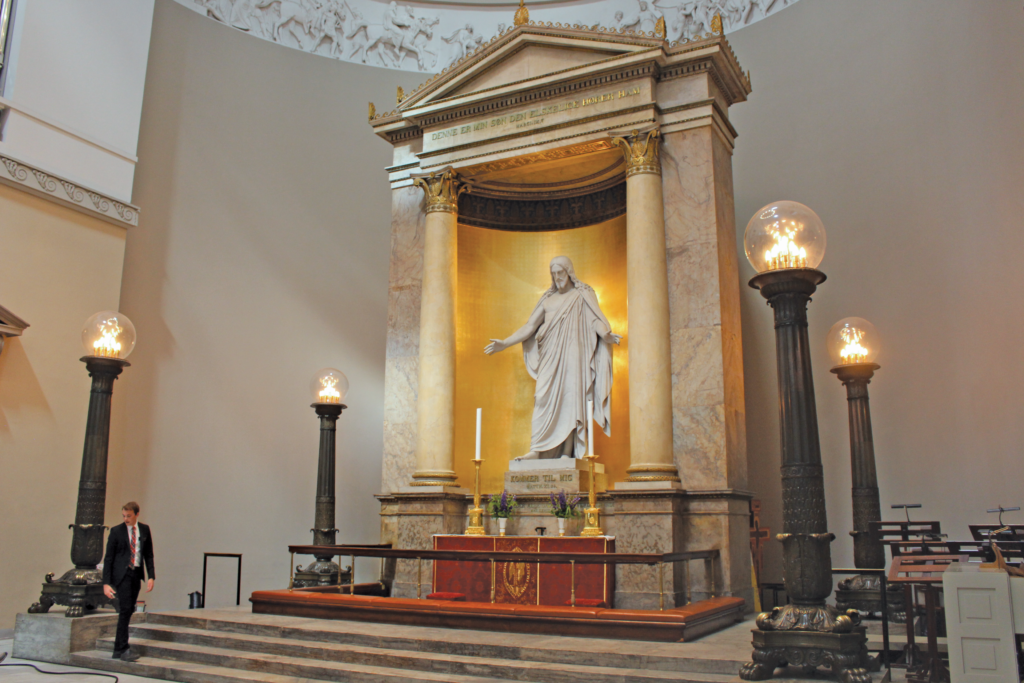 The Christus statue is flanked by two pillars, reminiscent of the pillars named after Jachin and Boaz at the entrance to the Temple of Solomon, which may represent the pillars of fire and of cloud that dwelt before the tabernacle and guided the Israelites in the wilderness.

The weight of the statue is carried, in repose, on the back foot, with the front foot uncovered. The Savior’s unclad feet stand on holy ground and are the blessed feet of him who brings good tidings. 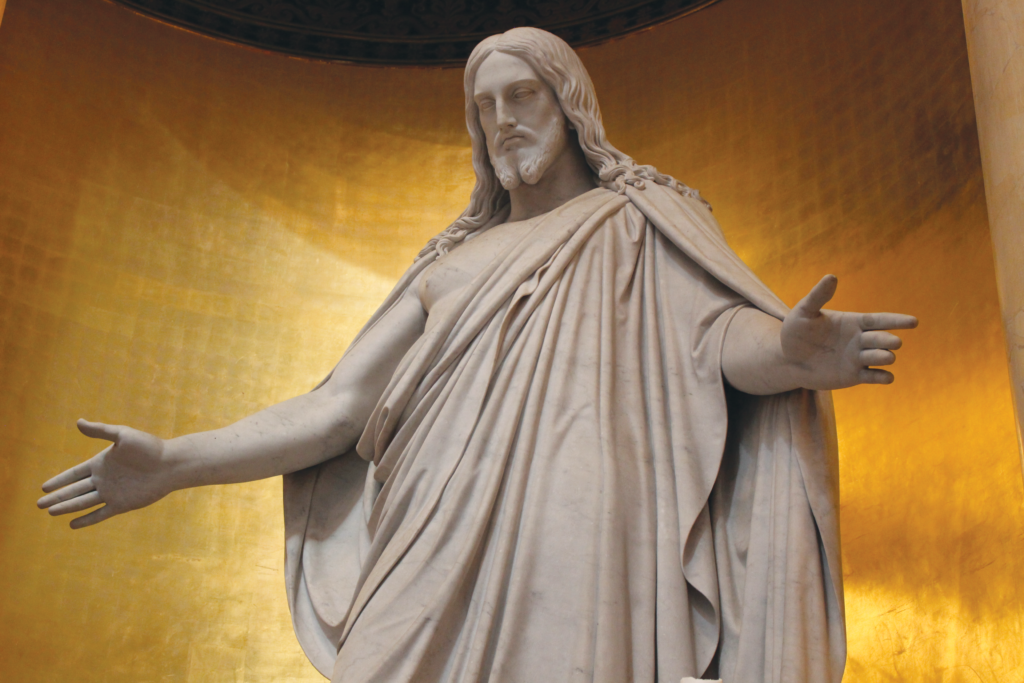 The arms are extended to the viewer below. The hands are blessing and inviting. The wounds are clearly visible, almost touchable.

Behind the Christus is a shiny gold curved background, marvelously signifying the glory of the sun, placed as if it were a radiant veil between the world below and the heavenly presence beyond.

On the entablature directly above the Christus and below the triangular pediment is an inscription that reads, “Denne er min Søn den elskelige hører Ham / Marci. IX. 7” (“This is my beloved Son, hear him / Mark 9:7”). These are the words spoken by the Father to Peter, James, and John on the Mount of Transfiguration. Although written in Danish, these words are not difficult for English or German speakers to recognize.

Underneath the pedestal on the monumental foundation is yet a third scripture, which reads, “See ieg er med Eder alle Dage indtil Verdens Ende / Mat. XXVIII. 20.” (“Lo, I am with you always, even unto the end of the world / Matt. 28:20.”), the final words spoken by the resurrected Christ to his Apostles as reported at the conclusion of the Gospel of Matthew. Countless numbers of replicas of the Christus statue have been produced, but none, as far as I am aware, are presented together with the three significant scriptures—one above this masterpiece in the voice of the Father to the three chief Apostles and two below in the voice of Christ, first to everyone, and finally to his Apostles.

To the right and the left of this largely unadorned Protestant sanctuary are two doors used by the clergy. On the lentil above one is the inscription, “Lader eder forlige med Gud / 2 Cor: V. 20” (“Be ye reconciled with God / 2 Cor. 5:20”), and over the other side door, “I skulle elske hverandre som ieg har elsket eder / Ioh: XV. 12.” (“Ye should love one another as I have loved you / John 15:12”). These portals may symbolize, on the one side, the Atonement and first great commandment, to love God, and, on the other side, the second great commandment, to love one another.

Although, based on existing sources, we cannot know for sure, Thorvaldsen himself may have planned all of these details for the setting of his most important lifetime work. It was commissioned in 1820. He brooded over it for nearly a decade, and then designed and modeled it in plaster in 1829. Though he made his name and reputation as a classical, monumental sculptor, the Christus clearly has become the most famous of this very popular and gifted artist’s works. Was he inspired? According to Elder Rex D. Pinegar, who was with President Spencer W. Kimball when he visited the Vor Frue Kirke in 1976, President Kimball told the caretaker of the church that “the man who created these statues was surely inspired of the Lord.”11 Was Thorvaldsen a religious man? Perhaps not.12 But did he capture the essence of the world’s need for a living, loving Savior? Certainly yes, and through his masterpiece all can come to appreciate the embrace of the Master’s arms outstretched in forgiveness.

Together, the overall effect of the expression and posture of the Christus radiates a complete and loving peace. He invites all to come unto him, “for my yoke is easy, and my burden is light” (Matt. 11:30). Thorvaldsen’s Christus graciously speaks to all: “Come unto me. . . . My peace I give unto you.” It welcomes every visitor today just as it did when it welcomed Erastus Snow and the arrival of those bearing the news of the Restoration in 1849, only five years after the deaths of Joseph Smith and Bertel Thorvaldsen, just three months apart in 1844.

John W. Welch is the Robert K. Thomas Professor of Law at the J. Reuben Clark Law School, Brigham Young University. He earned a bachelor’s degree in history and a master’s degree in Greek and Latin at BYU and a JD at Duke University. He is editor in chief of BYU Studies Quarterly. All photographs in this article were taken by the author, with the exception of the lower inscription, which was taken by Deidre Green.

6. Gravgaard and Henschen, On the Statue of Christ, 51.

7. Gravgaard and Henschen, On the Statue of Christ, 52.

9. Gravgaard and Henschen, On the Statue of Christ, 65.

10. “Due to the ailing economy [in 1829], the church commission now hesitated to order the apostles in marble. However, Thorvaldsen came to a rapid decision. He offered to have the apostles cut in marble on the sole condition that the church pay for the materials and the wages of the stonecutters. It was an offer they could not refuse. However, it was not until 1848 that all twelve of the plaster apostles were finally replaced by copies in marble.” Gravgaard and Henschen, On the Statue of Christ, 51. Another interesting aspect of the story is that “the apostles that were delivered by Thorvaldsen were too large to be placed in the niches which had been specifically fitted for them. Instead, they had to be placed freely in front of the pillars.” Gravgaard and Henschen, On the Statue of Christ, 20.