The Dance is the first film released from Flynn-Daines Productions, a new player in the Mormon cinema movement. Written and directed by McKay Daines, the film was produced by Michael Flynn, who also produced the well-received The Best Two Years (2003). Like the recent film Charly (2002), The Dance is a reworking of 1980s Mormon literature: it is adapted from Carol Lynn Pearson’s 1981 novel Overheard at the Dance.1

Set at a stake dance near the campus of Harvard University, The Dance follows three couples over the course of a single night and shows the development of their romantic relationships. As a Mormon romantic comedy, the film revolves around the concept of eternal marriage and what it means for people at various points in their lives. The recently returned missionary Cameron (K. C. Clyde) has asked out Zoe (Kari Hawker), his older brother’s ex-girlfriend who is not a member of the Church. Howard (Scott Christopher), a wise-cracking day trader in his midthirties, invites Alyson (Monique Lanier), a recently divorced mother of two, on her first post-divorce date. Finally, Shakespeare professor and dance organizer Charles (Michael Flynn) chaperones the dance with his wife Laura (Joyce Cohen), and they spend the night confronting a nagging and persistent sense of distance in their relationship.

Although it was made on a relatively low budget, the film has much to offer audiences. Framed with lines from Shakespeare, the plot is tightly constructed around love’s ability to endure. The dialogue often shines, and Clyde’s and Hawker’s acting especially give their characters emotional depth. The cinematography gives the film a polished feel and captures some beautiful shots of the characters’ interactions as well as of the film’s setting.

At the same time, the film has some uneven aspects. Stilted or overblown characterization is occasionally a problem. For example, Frank Gerrish, who was very good in Brigham City (2001), plays the DJ, a character who is simply obnoxious as he exuberantly exclaims in Wolfman-Jack style, “Strap on your safety belts because tonight we all have daaaaaancin’ fever. And we’re gonna boogie, boogie, boogie.” Additionally, the lack of extras is glaring in the dance scenes, emphasizing the film’s low budget in comparison to other films audiences will be accustomed to.

Beyond the aesthetics, the film is interesting from the perspective of the still-evolving Mormon cinema movement. Many Mormon films since 2000—in what Randy Astle has described as the fifth wave of Mormon cinema—have been set in the Mormon West or in various missions throughout the world.2 Like Piccadilly Cowboy (2007), which takes place in England, The Dance is set outside the Mormon corridor. This is an important move in filmic representations of Mormonism in that it affirms and explores the national and international aspects of Mormon experience.

The film also represents a recent trend in Mormon cinema to edit out Mormon-specific references in an attempt to attract wider audiences. This is true most obviously of Halestorm’s Church Ball (2006), but other recent films such as Pride and Prejudice (2003) and Beauty and the Beast (2007) also seek to find wider audiences by cutting culture-specific dialogue, locations, and images. The Dance also engages in this universalizing trend, adding just enough cultural markers that the film is recognizable as Mormon: a sign reads that the dance is sponsored by the Boston Stake; Howard jokes with Wolfman about whether he can call him “Brother”; and, when Zoe jokingly asks a bartender if Cameron can have a caffeine-free Coke, Cameron plays along by demanding “the hard stuff,” assuring, “Don’t worry about it. I’m not driving tonight!” Furthermore, Charles tells his wife that he feels she avoids him with her busy schedule and explains, “When we do get some one-on-one time, I feel like it’s compassionate service.”

At the same time, the film avoids deeper connections to LDS culture and doctrine, and this makes the film confusing at times. For example, the film largely avoids the words “Mormon” or “LDS,” and the absence can be glaring. When the dean of the Harvard Divinity School asks Charles to participate in a seminar on different religious perspectives on marriage, he names other participants by their faith—Muslims, Hindus, Orthodox Jews—but simply says, “I’d like you to speak on what you believe.” At another point, when Cameron explains temple covenants, including his commitment to live the law of chastity, he obliquely says only, “I’ve made certain promises I want to keep.” Remarkably, Zoe understands what he is saying, but the scene will have a watered-down feel for an LDS audience.

Such an approach contrasts with the deeper Mormon references in States of Grace (2005), The Singles Ward (2002), and even Michael Flynn’s The Best Two Years (2003). Avoiding or limiting overt Mormon references may work for LDS audiences who watch movies for entertainment only; however, these same audiences have the option of seeing other entertaining films that are outside the Mormon cinema movement and have larger budgets. What is lost is one of the appeals of Mormon cinema: authentic, insider representations of Mormon culture in a medium that has largely ignored or been hostile to Mormonism. 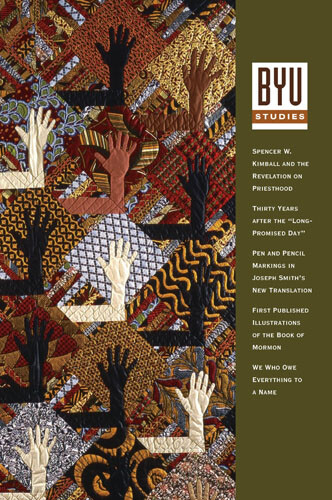 David A. Allred is Assistant Professor of English at Snow College in Ephraim, Utah. He earned a PhD in English with an emphasis in folklore from the University of Missouri–Columbia.