The Demands of Aesthetics upon Religious Art

There is a natural affinity between religion and art, but if they are to be happily joined, each must retain its distinctive virtue. Both art and religion can bind men together into a spiritual community, and they can do so the more effectively if each lends its strength to the other. But the religion must be sincere and deeply felt and the art must be aesthetically sound.

There are many definitions of religion and these vary widely. The definitions stress various factors—feeling, action, belief, cult, art and ritual. All of these factors are involved in religion, but it is necessary to see how they fit together. Most authorities agree that the binding force is the sense of sacredness, or as some would prefer to say, of holiness. The attitude of sacredness is a complex sentiment—something of a blend of wonder, awe, gratitude, and tender admiration. It is as distinctive as the sense of beauty, marking off the field of the religious as definitely as beauty marks off the field of the aesthetic. To substitute mere intellectual conviction or moral rectitude is to rob religion of its psychological core.

Robert H. Lowie, in his book Primitive Religion, maintains that the feeling of sacredness is evoked primarily by abnormal stimuli—the mysterious, weird, extraordinary, or supernatural. While admitting that the sense of astonishment is at the heart of religion, I believe that more is involved in religious experience than blank wonder and awe. There is also the feeling that what is deep and mysterious within oneself is akin to what is deep and mysterious in the object. “What is that,” St. Augustine asks, “which gleams through me and smites my heart without wounding it? I am both a-shudder and a-glow. A-shudder, in so far as I am unlike it, a-glow in so far as I am like it.” The unlikeness lends to religious experience its note of dread, but the likeness lends the note of tender exaltation. Toward sacred objects we generally feel a fundamental bond of community.

The need for communion and self-transcendence springs largely from man’s solitariness. In the little span between birth and death, each of us experiences the poignant fact of being confined within his own skin and limited by his isolated individual selfhood. Each tends to feel small and insignificant and powerless before the vast immensity of nature. Especially in moments of crisis, every man, like a shipwrecked Robinson Crusoe, wants to escape from the little island of his own ego. Religion is the return from solitariness to community—it is man’s endeavor, by an inward personal adjustment, to make himself at home in the world. By cultivating the religious sense of community, he escapes from his loneliness and self-alienation.

If I have interpreted religion correctly, it is not difficult to understand its affinity with art. As Shelley, in his Defense of Poetry, has declared:

The great secret of morals is love; or a going out of our own nature, and an identification of ourselves with the beautiful which exists in thought, action, or person, not our own. A man to be greatly good, must imagine intensely and comprehensively; he must put himself in the place of another and of many others; the pains and pleasure of his species must become his own. The great instrument of moral good is the imagination; and poetry ministers to the effect by acting upon the cause.

Shelley’s contention, that artistic imagination is the great means of uniting human beings, is far more profound than the notion so prevalent in our scientific and technological civilization—that aesthetic sensitivity is a mere “frill,” a secondary and cloistered virtue.

Art is not a delicate specialty on the margin of life but a necessity at the very center. It is an indispensable instrument for cultivating the sense of community. It breaks down the spiritual walls between human beings, while enhancing their individuality and free creativeness. All non-artistic modes of communication fail to portray adequately the inner man—his desires, hopes, misgivings, his joys and sorrows. These subjective states, in their uniqueness and inaccessibility, constitute the most private part of man’s being—they are not open to inspection and are least amenable to scientific description. The inmost core of personality would remain hidden and incommunicable if it were not for artistic expression. By means of art, the inner solitudes flow together and men are united in a spirit of appreciation.

The artist not only discloses his own moods but transcends his merely private feelings. In the deep recesses of his mind, he is in touch with the instinctively common part of man’s nature—with the values that are not peculiar to him as an artist nor to one man or a few, but are basic in the emotional experiences and secret longings of most human beings. If it were not so, art could not serve as the language of all humanity—a way of communicating across all the barriers of time and place. The works of all ages and countries—Gothic counterpart, Egyptian sculpture, Chinese landscape, Mayan temple, English poetry, and American novel—bear alike the spiritual imprint of humanity. In the realm of art the whole world is kin.

As master of spiritual expression, the artist can express religious emotions and intuitions with incomparable vividness. Hence it is no accident that religion has found its fullest expression in art, and that so much of the world’s great art is religious. The emotion of sacredness cannot be expressed in the language of science, nor in the prosaic language of common speech. Without art, religion is inarticulate. But without religion, art would lack its most potent themes. Art raised to its highest power is almost identical with religion grasped in its inmost truth. At their point of union each is at its best, art losing its frivolity, and religion surrendering its literalness and dogmatism.

By religion men seek to relate themselves to their fellow-men, their universe, and their gods. Because religious art springs from the search for such relationships, it belongs to the community rather than to the single individual. One of its prime functions is to hold the group together in harmony. Thus the arts of religion are closely allied to the arts of the community, symbolizing as they do the thoughts and feelings of kindred spirits. Religion, I have maintained, is essentially communal, and art as a mode of spiritual communication intensifies the bonds of community.

Some rationalistic or puritanical thinkers have denied the religious relevance of artistic imagery. They would scale religion down to abstract conceptions and moralistic practices. Others demand that religious groups unite on some single, eclectic, washed-out formula that tries to sum up the truth in all particular faiths. But without its particularistic elements, a religion is too disembodied and colorless to excite vivid conviction. The concrete image, as in the story of Job or the personality of Buddha, is more unforgettable than the mere abstract precept. Seeking to arouse, to stimulate, to inspire, religious art appeals to man’s feeling through the rich, vivid color of stained glass, fresco, or oil paint; through the exalted musical harmonies of the cantata or the mass; through the restless aspiring arches and buttresses of a Gothic cathedral or the delicate perfection of a Greek temple; through the austere stone gods of Egypt or the attenuated, spiritual figures of El Greco. Symbolic imagery has always been the content and poetry the language of religious thought. No abstract distillate is a satisfactory or possible substitute. In the very nature of religion the particular must be kept together with the universal, but the image or symbol need not be interpreted with the superstitious literalism of the fundamentalist. What the religion of the literal-minded adds to the artist’s is a limited apprehension, which takes factually what he meant ideally, and degrades into superstition what in his mind was a true interpretation upon a symbolic plane.

Yet it is possible to exaggerate the interdependence of art and religion. Not all good art is religious, nor is all religious art good. For art to be excellent, it must meet the standards of aesthetic merit. For example, the medium chosen should be appropriate, and its expressive values should be effectively exploited. The sensuous and material qualities of the work of art—such as colors, shapes, textures, motions, sounds—should be employed with a keen appreciation of their unique qualities and expressive power. All representational details or symbolic meanings should contribute to a well-knit and articulate whole. The style should be sincere, original, and richly expressive, and the form should harmonize all the constituents into a total organic unity. Religious content, however well-intentioned, cannot redeem a work of art that is defective in these aesthetic respects.

Likewise religion can be good or bad, wise or foolish, and no artistic skill can redeem cheap, or insincere, or shallow religious attitudes. Whitehead has said: “Religion is force of belief cleansing the inward parts. For this reason the primary religious virtue is sincerity, a penetrating sincerity.” Religion must be deeply and sincerely felt if it is to inspire great art. During many centuries religion has stirred the human imagination with extraordinary depth and force. But there have also been many failures—works that are insincere, or weakly sentimental, or narrowly doctrinaire, or merely conventional, or exceedingly superficial. The weaknesses of religion become more apparent when they are objectified in art.

Also it must be said that art has its own wide and autonomous province. Art is art, and it is not morals or religion or propaganda. Its standards of technical excellence are its own, and its subject-matter is as wide as human thought and experience. The realms of nature and fantasy are open to the artist, and there he may wander free to select and idealize and portray what he will. There are some earnest idealists, such as Tolstoy, who would forbid, if they could, all art that does not contribute to the religious and moral ideals which they have in mind. Tolstoy took the extreme stand he did partly because he appreciated so vividly the power of art to mold human character. The noble ideal to which he wished to dedicate art, the universal brotherhood of man, is the more moving because, in his own life, he tried with such intense conviction to abide by it. But on the basis of this standard he would ban most of the great art—masterpieces of the past as too secular or non-moral. An art-standard that would exclude the plays of Shakespeare, the music of Mozart, or the painting of Cezanne, is intolerable.

To conclude, art and religion must not be confused, and each has its own standards of worth. Nevertheless, religion would be infinitely poorer without art to give it form and vividness; and art has often been lifted to a plane of greatness by the grandeur and universality of the religious values that it expresses. Religious art is best when it expresses no narrow and partisan spirit. To be sure, many descriptive works of art, such as paintings, are expositions of religious dogmas, but if they are great it is not for this reason. On the other hand, too much of our contemporary art is trivial because it lacks the breadth and intensity of the best of religious art. The greatest art is the consecration of our deepest convictions, and contains the truth of our most stirring visions. 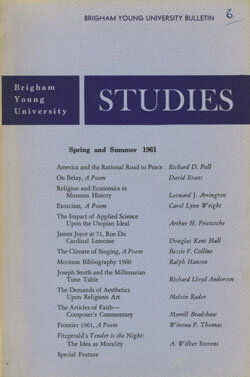 Next:
The Articles of Faith—Composer's Commentary

Dr. Rader is chairman of the department of philosophy of the University of Washington. This article is a transcript of a talk given at the symposium on “Religion and the Creative Artist” held at BYU this year. Should the reader wish documentation, he is invited to write Dr. Rader.