Design, Construction, and Historic Context of the Kirtland Temple

Architectural historians and preservationists are fond of saying that a building can be regarded as a historical document; a skilled and sensitive observer can read much about its history, builders, and surrounding community through its design, structure, craftsmanship, and details. In this groundbreaking book, Robison is that skilled and sensitive observer, combining thorough documentary research with a detailed and perceptive analysis of the first important Latter-day Saint building. He thereby illuminates the personalities, culture, and religious foundations of early Mormonism.

Robison is uniquely qualified to write a historical analysis of the Kirtland Temple. A professor in the School of Architecture and Environmental Design at Kent State University in Ohio, he has degrees in both engineering and architectural history. His unusual ability to analyze both the style and structure of architectural monuments has been reflected in numerous scholarly publications as well as in practical consultation on the conservation of historic buildings. A member of the LDS Church, Robison was commissioned by the Restoration Trails Foundation of the RLDS Church to study the structural condition of the Kirtland Temple in the late 1980s. In the course of his detailed study of its current problems, he examined literally every structural member in the building. Through this highly technical process, he gained insight into the complex history of the building and its builders.

The book is handsome and concise, with just 147 pages, including nearly a hundred illustrations plus fifty pages of appendices. The presentation is mostly chronological, with generous portions of stylistic and structural analysis along the way. The illustrations are as important as the text, bringing all of the relevant drawings and many helpful photographs together in one volume for the first time. The appendices include a documentary chronology, citing the major historical sources, a list of workers on the temple, a detailed record of the dedication services compiled from two different accounts, a collection of fascinating historical descriptions of the building, and a glossary of architectural terms.

While providing a coherent narrative of the temple’s history, Robison also offers original insights into perplexing issues about its design. Other writers have puzzled over the differences in proportions between the drawings for the Independence Temple and the facade of the nearly identical Kirtland Temple. Robison shows how the inexperienced draftsman’s omission of some structural features on the drawings can account for these differences (9–15). He further reveals how novice builders working without detailed design drawings produced irregularities in the spacing of columns and windows (34–40). Robison contributes an important original discussion of Canadian precedents for the rubblestone and plaster exterior walls. He suggests that this type of construction, seldom seen in Ohio or the Eastern states, was the contribution of Canadian builder Artemus Millett, who became superintendent of construction at the time when attempts to build with brick had failed (33).

While others have suggested that decorative wood carvings in the major rooms of the temple probably came from published builders’ manuals, Robison identifies the manuals and editions most likely used and then explains the differences in style between lower and upper meeting rooms by suggesting that their builders were using two different manuals published nearly thirty years apart (60–68). He also offers a thorough explanation of the use and technical aspects of the curtains that could divide the rooms into smaller areas (85–95). Mostly in the footnotes, Robison tactfully corrects some questionable conclusions of earlier writers and debunks some persistent myths, such as the doubtful attribution of uniquely Mormon symbolism to rather typical American decorative elements in the carved woodwork. These and other insights constitute the most convincing and complete examination of the temple’s architecture that has ever been published.

Robison’s style of writing is clear, analytical, and straightforward. He is careful to explain and illustrate the more technical aspects of his analysis in a way that any careful reader can follow. If there is something missing in the book, it may be some expression of the author’s own aesthetic and emotional reactions to the temple. In my experience, the temple’s exterior has a surprisingly impressive sense of monumentality and purity of form that is not captured in photographs. In much the same way, the arrangements and details of the principal rooms combine to create an impression of exquisite craftsmanship, an aura of wonderful natural light, and a feeling of harmony that are quite moving and completely appropriate for their sacred purposes. I conclude from the devotion and enthusiasm the author has obviously brought to this project that he must have similar feelings, which I would have enjoyed knowing.

In any case, Robison respectfully presents the builders’ accounts of their feelings and religious experiences in connection with the temple, but without taking the tone of apologist. As a result, the book should appeal equally to all branches of Mormonism and to non-LDS audiences interested in history and architecture. His presentation of such extensive research and perceptive analysis, together with his inclusion of so many supportive documents and illustrations, should make this the standard work on the subject for a long time to come. 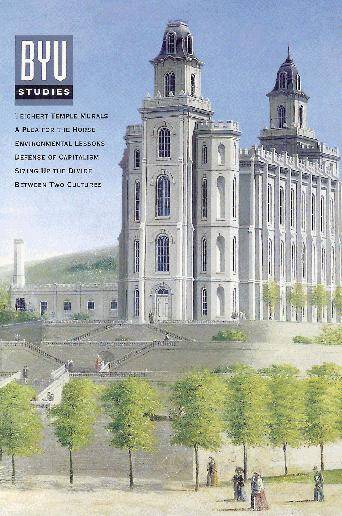 Previous:
How Wide the Divide?