The Gentile Comes to Cache Valley

A Study of the Logan Apostasies of 1874 and the Establishment of Non-Mormon Churches in Cache Valley, 1873–1913

Since the pioneering work of Robert J. Dwyer, historians, including Helen Papanikolas and T. Edgar Lyon, have taken an interest in the non-Mormon population of the Beehive State. Like Papanikolas, Simmonds has studied the development of a gentile community within a single region of Utah.

Simmonds’ book begins with a a description of Cache Valley in 1873 and moves to a discussion of the creation of a gentile enclave within the Mormon community. Unlike either Carbon County or Salt Lake City gentiles, the Cache County non-Mormons were largely apostates who had originally gathered as converts to Zion. This insight is undoubtedly the significant aspect of Simmonds’ study. One suspects that the gentile population of most cities and towns in the Mormon domain were more like those in Cache County than those in Carbon and Salt Lake counties, where the gentile community consisted principally of outsiders with a sprinkling of apostates.

Simmonds assigns essentially four reasons for the apostasies which led to the establishment of the gentile community: (1) the establishment of the Episcopal Church in Logan, which became possible following the relatively easy access provided by the Utah and Northern Railroad; (2) the lynching of Carles Benson, son of the late Apostle Ezra T. Benson; (3) the development of the cooperative movement; and (4) the construction of the Logan Tabernacle.

The evidence of the effect of the cooperative movement and the construction of the Logan Tabernacle seem to this reviewer conclusive. The missionary and school efforts of the Episcopal and other churches seem also to have had an effect. Most tenuous, however, is the connection between the Benson lynching and the apostasies. Here, the evidence is largely post hoc with no causal connection shown.

From a discussion of the causes, the study proceeds to a consideration of the effects and the eventual resolution of the conflicts. Battles over land together with the establishment of Protestant mission schools in a number of Cache Valley communities are studied most closely. The study then deals with the success in the efforts to “Americanize” Cache Valley, followed by a consideration of the reconcilation of the Mormon and gentile communities after statehood. The final two-fifths of the book is biographical, consisting of sketches of some of the prominent gentiles.

The book is marred by some minor factual errors, such as the assertion that John A. Rawlins was the Republican and Frank J. Cannon the Democratic candidate for congressional delegate in 1892, but the major difficulty with the book seems to have been in its conceptualization. The gentiles are studied only as they relate to the Mormons. There is little effort to consider the unique aspects as Papanikolas did with the Greeks of Carbon County. Why, for instance, did some who converted from Mormonism become evangelical and some liturgical Protestants? Simmonds seems to be unaware of the differences between the two types of denominations. What customs and activities developed within the gentile community? Were there significant differences in the lives of those living in various portions of the gentile community? A study entitled The Gentile Comes to Cache Valley ought to have given some consideration to these questions.

Nevertheless, this book is a fine beginning. The major insight into the makeup of the gentile population is sufficient to warrant scholarly and popular attention. It is hoped that Simmonds and other scholars will attempt to answer the questions raised above, and above all, that studies will be made of other gentile communities in Mormon areas. 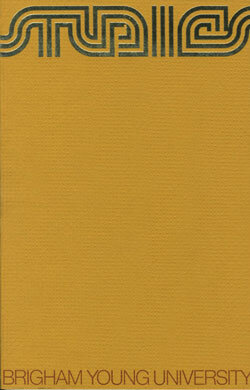 BYU Studies Quarterly 17:2
Next:
The Association for Mormon Letters