A Study of the Mormons in the Light of Economic Conditions

The Latter-day Saints: A Study of the Mormons in the Light of Economic Conditions, by Ruth Kauffman and Reginald Wright Kauffman (Williams and Northgate, 1912). Republished with an introduction by John S. McCormick and John R. Sillito (University of Illinois Press, 1994)

The Latter-day Saints: A Study of the Mormons in the Light of Economic Conditions, which originally appeared in London in 1912, was the work of two Marxian socialists from America. It was particularly significant in the context of the intense anti-Mormonism in England in the early twentieth century, for it was the first full-blown Marxist interpretation of Mormon history to be published. At heart, however, it was also an indictment of American capitalism, which, the authors charge, eventually took over and dominated the Church.

The first five chapters sketchily cover the American setting, the origin of the Church, the Martyrdom, the exodus to the Great Basin, and the creation of the Mormon “empire” in Utah. They are written in a strident tone and avoid no opportunity for snide remarks clearly intended to show that if Mormonism ever had a spiritual foundation it rapidly disappeared as the Church became more involved in economic enterprise. The fierce desire by the Mormons for economic control of the Great Basin, the authors claim, led directly to the Mountain Meadows Massacre and the Mormon War. Such spurious interpretations have long been discredited by responsible Mormon and non-Mormon historians, but they were clearly the kind of thing anti-Mormons in England and elsewhere wanted to hear in 1912.

The authors also charge that the crusade against the Mormons was not a moral crusade against polygamy, but rather a crusade against the economic and political power of the Church in the Territory of Utah. In this they were partly right, but the modern reader will recognize many distortions. The same thing is true with the discussions of Mormon doctrine, the practice of polygamy, and Mormon economic enterprise around the turn of the century.

While the book is highly distorted historically, it does contain a variety of reasonably documented but little-known facts. However, its value lies chiefly in what it reveals about the kind of “scholarly” literature about the Mormons that once circulated in England and elsewhere. At least the reader will understand why readers of that time looked at the Church with a high degree of suspicion, especially if this kind of literature was all they had access to.

The republished book is introduced by John S. McCormick and John R. Sillito, who have both worked in socialist history and themselves adopt an economic interpretation of history. Their interesting introduction has value partly because of what it tells about the Kauffmans.

In their concluding chapter on “The Future of Mormonism,” the Kauffmans summarize their conviction that religious forms are the results of economic conditions and that the economic conditions of the early nineteenth century produced Mormonism. Moreover, they say, parroting the typical Marxian view of the evolution of society, when capitalism finally expires in the United States, then all Christian “‘Science’ will end . . . [and] Mormonism, in which the hierarchy is already exploiting instead of benefiting the laity, will pass away. . . . Until that time, it [Mormonism] will in one form or another remain” (346). I think the Kauffmans would be very surprised at the present form of both Marxian socialism and Mormonism. 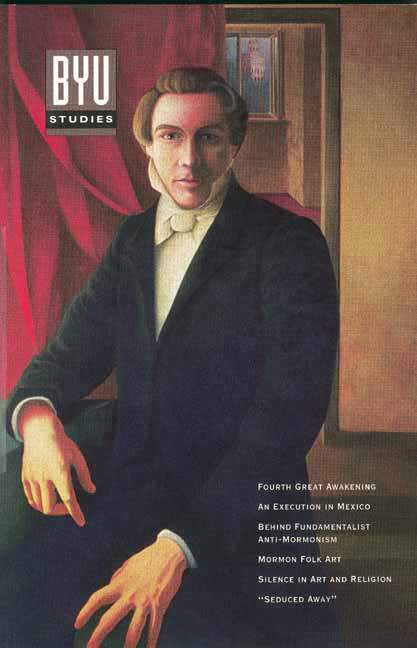 Previous:
Prepare to Be Healed

BYU Studies Quarterly 35:3
Next:
Meyers all the way down