The Mormons’ War on Poverty

If nothing else, the publication of The Mormons’ War on Poverty should lay to rest the erroneous notion that in its present form the welfare program of The Church of Jesus Christ of Latter-day Saints began in 1936. Actually, Joseph Smith laid out the basic principles of the program—equality, self-reliance, and charity—in revelations he received as early as December 1830, and the basic features of the current welfare system took shape in Salt Lake County during the 1890s.

Bruce Blumell began The Mormons’ War on Poverty during the Arrington administration—the Arrington Spring—of the Church’s History Department. After completing a book-length manuscript, which interpreted the history of welfare in the Church from 1830–1980, Blumell left to become an attorney in Canada. University of Utah professor Garth Mangum picked up the project in 1987, revising and updating the manuscript, adding a broader economic context, and interpreting current welfare challenges. The result is an excellent study which should help the Church’s lay public, interested outside parties, and employees to understand the development of the historic and current welfare systems.

The welfare program of the Church originated in revelations to Joseph Smith during the 1830s and in their implementation in the law of consecration and stewardship and its later modifications. After the Saints failed to live the law in Ohio and Missouri, section 44 verse 26 of the 1833 Book of Commandments was revised in the 1835 Doctrine and Covenants to include an admonition to “remember the poor, and consecrate of thy properties for their support.”1

After settling in Nauvoo, the Church implemented much of the structure of welfare work that still exists. Joseph Smith organized wards and called bishops to coordinate welfare work, and he set up the Relief Society, which played a central administrative role in the system until the transfer of administrative responsibility to priesthood line authority in the 1930s. Since then, the Relief Society has been increasingly relegated to a staff role.

In Utah, the Latter-day Saint leadership expanded its efforts to promote the welfare of the Church’s members. Measures included a public-works department and, in every ward, administration of welfare by the bishop and Relief Society. The authors seem unaware of how early the Relief Society became involved, since they mention neither the Indian Relief Societies of the early 1850s nor the reorganization of the Relief Society in Salt Lake City wards during the Reformation of 1856–57 and they omit the work of Relief Society sisters in organizing assistance for migrating Saints.2

During the 1870s, Brigham Young organized the united orders in an attempt to promote economic equality, a major goal of the early welfare system. Although the authors believe “Young himself did not join” (71) a united order, actually he and a group of leaders in Salt Lake City organized United Order Number One in August 1875. Like most of the other United Orders, it did not function well. In fact, all but a handful of united orders failed within a year.3

During John Taylor’s administration, the Church abandoned attempts to promote equality and relied instead on economic development and coordination under Zion’s Central Board of Trade. Although the board had a rather ambitious agenda, in practice it carried out only a somewhat more extensive program than the combined efforts of commercial clubs (often called chambers of commerce) and the monopoly movement in business enterprises. Here, the authors could have helped us better understand Zion’s Central Board through a specific comparison with the larger pattern.

The system of welfare codified in the plan adopted in 1936 (with exceptions noted below) was actually an extension of the role played by the bishops and Relief Society presidents, especially in the Salt Lake Stake, during the depression of the 1890s. At that time the Church organized an employment bureau, provided assistance to the needy and unemployed, promoted economic development and employment, and tried to move people back to the land.

Mangum and Blumell rightly point out that “contrary to a common misconception, the Church . . . operated a systematic welfare program during the first thirty years of this century” (75). In 1899, the Presiding Bishopric issued the first handbook of instructions, a substantial portion of which outlined welfare programs. The Relief Society played a central role in these developments. Moreover, through the efforts of Amy Brown Lyman and Stephen L Richards, the Relief Society inaugurated a system of professional social work which predated Utah’s program. The Relief Society also promoted many forms of cooperation—including assistance to women with small children—between the Church and federal, state, and local governments.

A major way the program of 1890–1935 differed from the later program is that Church leadership on the ward, stake, and general level cooperated extensively with government officials. The Relief Society’s social services department coordinated its efforts with county charities. Each charity, in turn, worked with the Community Chest and other local philanthropies. Presiding Bishop Sylvester Q. Cannon emphasized that the family had first responsibility to care for its members; second responsibility rested with local government, and third responsibility fell on the Church. In practice, however, the comprehensive cooperation between the public and private organizations and the Church provided for an ad hoc division of labor that worked extremely well to husband all the resources available.

The major changes in the welfare program originated with the ideological proclivities—particularly the distrust of government—of J. Reuben Clark Jr., who was called to the First Presidency in 1933. Soon after his call, President Clark pressed the Church to end its cooperation with governments. Formal and informal cooperation among church, private, and public agencies had given bishops and Relief Societies primary responsibility for organizing welfare assistance. But President Clark wanted to centralize welfare work under general Church priesthood direction by eliminating the Relief Society as a line authority in welfare work and by severing cooperation with local governments.

Bishop Cannon and Amy Brown Lyman, then serving as a counselor in the general Relief Society, opposed this radical departure. Their opposition temporarily prevented President Clark from achieving his goal of centralization. Nevertheless, President Clark’s position prevailed in 1935, but contrary to public perceptions, the Church did not have the resources to care for all of its destitute and unemployed members.5

Mangum and Blumell assume that the other members of the First Presidency—Heber J. Grant and Anthony W. Ivins—agreed with President Clark’s position. They have not, however, explored the possibility that Ivins may have supported Cannon and Lyman in sidetracking President Clark’s opposition to continued cooperation with governments. At this point, we do not know President Ivins’s role, but it ought to be a fruitful area of research. We do know, however, that after his call to the First Presidency in 1921, Ivins—an ideologically committed Democrat—consistently pressed the First Presidency and Council of the Twelve Apostles to alter its pro-Republican stance. Moreover, he and B. H. Roberts were the major early supporters of the New Deal among the General Authorities until Roberts’s death in September 1933. By 1934, however, Heber J. Grant, previously a committed Democrat, had become lukewarm, eventually breaking with the Democratic Party and opposing Franklin D. Roosevelt. President Ivins’s death in 1934 might have removed another obstacle to President Clark’s program.

At any rate, President Clark’s views carried the day and in the process sent antigovernment signals to the Church membership until at least 1991, when a revision of the welfare handbook included a provision listing “‘other sources, including government’” (202) as fountains of welfare help. The antigovernment stance seems to have waned considerably during the 1980s because of President Spencer W. Kimball’s well-known compassion and President Gordon B. Hinckley’s nonideological approach, which was “‘not [to] let political considerations dull my sense of mercy or thwart my responsibility to the sons and daughters of God’” (248). As Mangum and Blumell document it, President Clark’s approach proved extremely divisive in the Mormon community; his stance led local leaders and members more orthodox than the Church leadership to attack individual members for cooperating with the government in alleviating suffering and offering gainful work to the unemployed.

The story since 1936 is generally quite familiar to most members. Mangum and Blumell, however, fill in the detail and interpret these developments. The addition of employment services, social services, and other welfare services has expanded welfare activities, especially since World War II. However, other changes have taken place. Welfare farms, an important feature of the welfare system until the 1980s, have declined in importance, and many have been sold or taken over by professionals.

In a major contribution, the authors discuss the extensive welfare activities outside the United States and Canada, activities which are generally not well known to most North American members. These contributions include educational institutions (recently curtailed), welfare services missionaries, employment services, humanitarian relief, instruction to promote self-sufficiency, and enterprise developments.

Throughout all of these changes in the welfare program, several principles have remained. The original goal of the program was to assist members in achieving a relative degree of equality and, if that proved impossible, to promote self-sufficiency. As the authors point out, challenges in achieving these goals remain. The goal of self-sufficiency seems especially formidable in third-world countries and in inner-city families consisting of divorced and largely unskilled women with small children. Many compassionate Church members continue to believe in equality as a goal, but the Church has no active programs for promoting it. At the same time, welfare work remains a significant feature of the Church’s mission to perfect the Saints and care for God’s children. 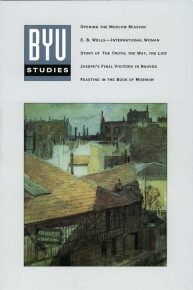 Previous:
The Proper Edge of the Sky

4. Four of the six stake presidents—Hugh B. Brown, Harold B. Lee, Henry D. Moyle, and Marion G. Romney—later became members of the Council of the Twelve Apostles and the First Presidency.