The New Testament: A Translation for Latter-day Saints

Thomas Wayment, classics professor at Brigham Young University, has earned a reputation as one of the most capable and reliable Latter-­day Saint scholars of the New Testament and the ancient classical world in which Christianity arose. Educated at the Claremont Graduate School of Religion, Wayment generally addresses Latter-day Saint audiences, whose faith he shares. His writing includes credible work on New Testament manuscript traditions, Joseph Smith’s translation of the Bible, and the historical lives of Jesus and Paul. Wayment has now accomplished his most ambitious project to date: a fresh translation, based on the best available Greek manuscripts, of the entire New Testament into a modern, lucid English.

Wayment’s translation seeks to serve the perceived needs of English-speaking members of the Church. This goal is evident in both the translation proper and the supplementary material. Wayment explains the need for a New Testament in readily understood modern prose: “Jesus did not speak using archaic English terms and phrases. His speech was quite ordinary [for its time and place]. . . . As language evolves, so too translations need to evolve” (viii). A student of scripture, for example, can with Wayment’s translation conveniently read Jesus’s parable of the wheat and weeds in Matthew 13 without having to look at a footnote to learn what tares are (31–32). But more than mere convenience is at stake in this translation. In many passages, Wayment’s modern English can save a hapless reader from being stumped by intricate Pauline arguments that are entangled in the half-foreign tongue of Jacobian English. Wayment’s modernizing service to us is important. His text is readable and intelligible, hence inviting.

The presentation of this translation includes helpful, though not unusual, headings preceding and within each chapter. The volume also includes able and undogmatic introductions to each New Testament book; these introductions address evidence of purported authorship; ancient manuscripts; and the structure, organization, traits, and apparent intent of each book. Excluding the introductions for the Gospels (for some unstated reason), the introduction to each book (or cluster, such as 1, 2, and 3 John) also comments briefly on the book’s connection to Latter-day Saint beliefs, even where the connections are weak. The introduction to 1 Timothy, for example, acknowledges that the “Pastoral Epistles have not been overtly influential in the Restoration, but Latter-day Saints will find in them support for the sixth article of faith: ‘We believe in the same organization that existed in the Primitive Church’” (379). By this, Wayment means to suggest that first-century bishops worked in connection with deacons and elders—a modest insight.

The volume’s rich, succinct annotations compose a quarter to a third of a typical page and will help both casual and serious readers. Throughout the cross-references, explanatory notes, and introductions to each book, Wayment’s prose, like his translation, is clear, lean, unpretentious, competent, and illuminating. His annotations reflect diligent mastery and admirable balance: they are as long as they need to be and no longer. The scriptural cross-references are informed by Wayment’s direct textual, literary, historical, theological, linguistic, and conceptual expertise.1 His annotations include variants in the ancient manuscript record and sometimes serve also as commentary. The following is a good sample of Wayment’s annotation, commenting on Mark 1:30–40, in which Jesus heals Peter’s mother-in-law, departs from Capernaum, and heals a man with leprosy:

1:30 Paul also noted that Simon Peter was married (1 Corinthians 9:5). 1:32 The importance of sundown is that the Sabbath had passed and Jesus can now work freely. 1:34 Mark, more than the other Gospels, reports that Jesus frequently told people to not proclaim or make him known. This phenomenon is known as the Messianic Secret, and Jesus on occasion encouraged people to delay proclaiming him until it was the right time to do so (see Mark 1:44–45; 7:36; 8:29–30). Mark may have seen this as fulfillment of the saying recorded in Mark 4:11. 1:35 Mark frequently notes that Jesus liked to retire to uninhabited, or deserted, places (see Mark 1:45; 6:31, 32, 35). 1:40 Anciently, those with leprosy were banished (2 Kings 7:3–10). Little is known about how they were culturally accepted or ostracized in the first century CE. The Gospels do not portray them as living in separate communities. (69)

These notes are an unobtrusive asset.2

This translation is deeply beholden to the King James Version, which Wayment rightly says is “woven into our hymns, our ordinances, and our scriptural canon” (vii). He is eager not to offend KJV-reading Saints and insists that his years-long labor is not an attempt to replace the KJV but rather “an invitation to engage again the meaning of the text for a new and more diverse English readership” (vii). He therefore defers to King James phrasing unless he detects a compelling reason to overturn it. But while this is a courtesy to the common sensibilities of Church members, I found myself wishing that Wayment’s translation was less beholden to tradition, thereby exposing us readers to better or alternate interpretations than the KJV proffers.

For example, Wayment’s recasting of Matthew 5:48—“Therefore, you will be perfect, even as your heavenly Father is perfect” (14)—puts only a slightly different angle on the enigmatic commandment given in the KJV: “Be ye therefore perfect.” Wayment’s version does not resolve the ambiguity of whether the sentence is properly understood as present imperative (that is, a command) or future declarative (a prophecy). A bolder shift from tradition might yield alternate insight into what Christ intended. For instance, the Greek word behind “perfect” in Matthew 5:48, τέλειοι (téleioi), may be intended not as “flawless” but rather as “whole” or “complete.” Kenneth Samuel Wuest, in The New Testament: An Expanded Translation, translates the same passage as, “Therefore, as for you, you shall be those who are complete in your character, even as your Father in heaven is complete in His being.”4 Wuest’s untraditional translation surrenders elegance by using as many English words as necessary to bring out the richness, force, and clarity of the original text, and although he stretches the limits of appropriate English word order and style, he does compel a reader’s attention to what he or she is reading. In such an instance as Matthew 5:48, the shifted implications for discipleship and living are substantial.

Both the Church’s traditional edition and Wayment’s more accessible, modern translation assist Church members in integrating the Bible, modern revelation, and Church teachings into a conceptual whole. These sources, however, may limit understanding if used exclusively or naively. Additional and important perspectives can be found in Bibles that seek not to harmonize ancient and modern scripture but to convey how Christians in the first century would have understood the texts. One dramatic example is David Bentley Hart’s The New Testament: A Translation.5

This and any such quibbles are meant to invite us to resist growing too inbred in our view of scripture and do not signal discontent with Wayment’s large achievement. “Where there is no vision, the people perish,” as the proverb teaches (Prov. 29:18). But the vision we require can be threatened by partial cataract if we do not have access to a Bible we can read and understand and that is relevant to the gift of the Restoration. Wayment’s New Testament translation is a Bible that readers can use to help clear their vision. I and potentially every English-speaking Church member ought to acknowledge our debt to him. Thanks be to the scriptural ophthalmologist we call Thomas Wayment. 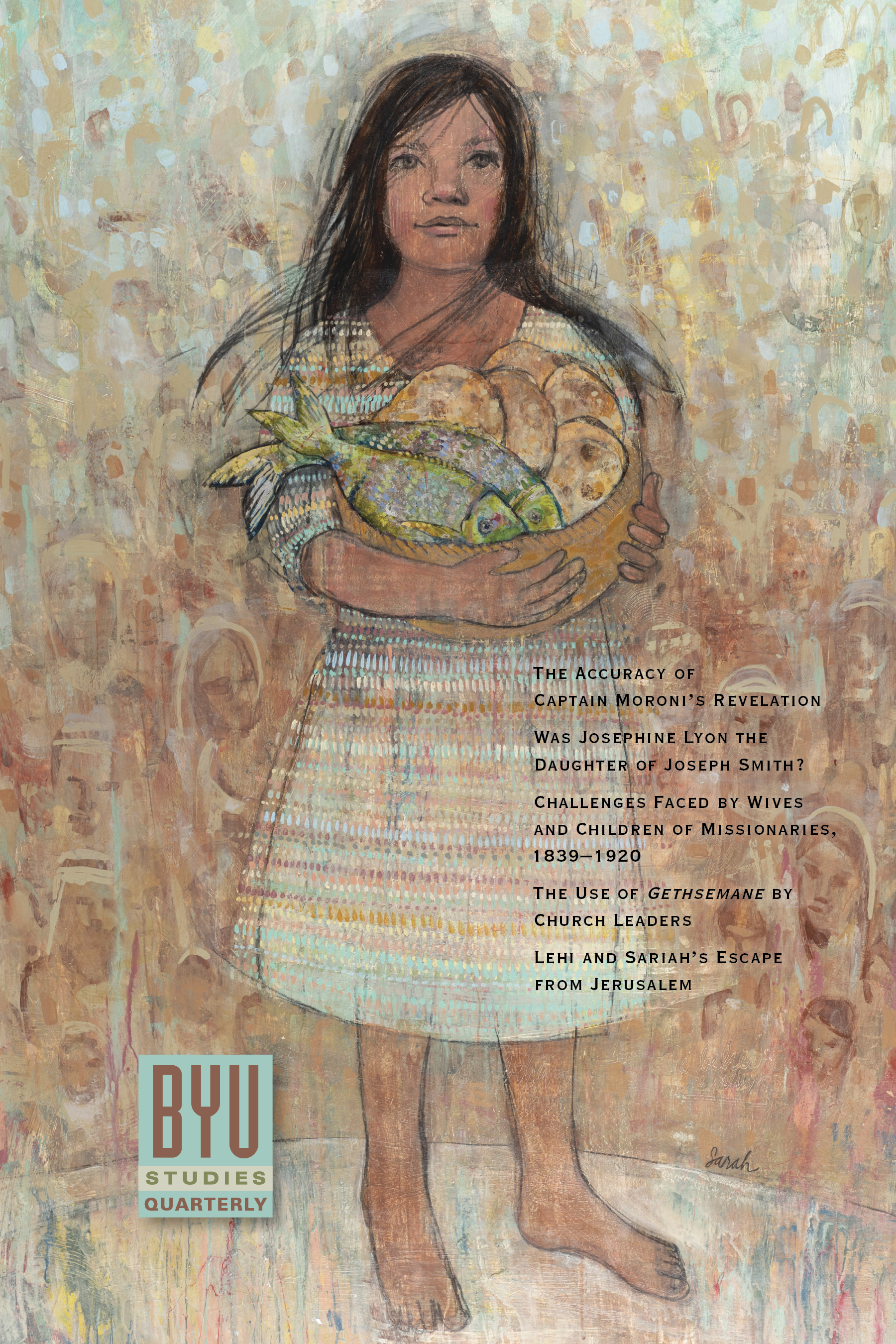 Previous:
Your Sister in the Gospel

Next:
Bible Culture and Authority in the Early United States

Philip L. Barlow is the associate director of the Neal A. Maxwell Institute for Religious Scholarship at BYU and the former Leonard J. Arrington Chair of Mormon History and Culture at Utah State University. He is the author of Mormons and the Bible: The Place of Latter-day Saints in American Religion, updated ed. (New York: Oxford University Press, 2013).

1. For comparison, the cross-references in the standard Latter-day Saint edition of the Bible were largely created by an army of teachers in the Church’s education system using primarily their devotion and best judgment; in many cases, this yielded poorly curated connections that are conceptually and theologically uncertain.