The Philosophical Foundations of Mormon Theology

In the brief compass of a monograph, Professor McMurrin has given us a survey statement of basic metaphysical implications of Mormon theology (this is the meaning of “Philosophical Foundations”) which is penetrating and, in many ways, helpful.

Primarily he raises six classic questions of ontology, outlines major historical alternatives, and then identifies and relates Mormonism. To do justice to the Mormon position, he is forced to qualify each of his characterizing terms with another term, often of traditionally opposite meaning. Thus, for example, he describes Mormonism as pluralistic and non-absolutistic in its quantitative conception of the universe (p. 8), yet qualitatively as monistic (all things are matter) and at the same time dualistic (spirit is more refined than matter) (p. 17). It is dynamistic (the universe is in process), yet committed to unchanging entities: intelligences, eternal elements, space and time, and “principles” (pp. 12, 23, 24). It is super-naturalistic (God, angels, spirits are not “ordinary objects of sense perception”), yet naturalistic (they are subject to the spatial, temporal, causal order) (p. 19). Its value theory is absolutistic and platonic, yet at the same time instrumental and pragmatic (pp. 24, 25). It is realistic in its conception of universals (p. 26), yet at the same time nominalistic, especially as regards the Trinity (pp. 8, 28). It affirms the necessity or self-derivation of all existent things, yet teaches genuine human freedom and novelty (p. 29). In addition to these matters of exposition, the author offers a sketch, under each heading, of important inter-relationships and implications of these ideas for other Mormon teaching and practice.

Now it is, of course, possible to question the adequacy, in principle and in fact, of this selection of issues and of the descriptive pigeon-holes resulting from it. Mormonism, it might be said, is unamenable to such analysis because (1) it is avowedly open-ended and incomplete in structure; (2) its actual development historically has been unsystematic; (3) its inmost meaning and vitality are more clearly available to the participating prophet than the detached philosopher; and, hence, (4) to distill philosophical theses out of Mormon theology is to superimpose and speculate. These objections no doubt have relevance to this project, but they do not completely invalidate it or destroy its worth. The approach has a place and, for this writer, a very important one.

The monograph shows clearly that it is precarious to move from similarity of word-usage to assumptions of common belief. The very fact that on several counts the author couples his terms with those of opposite connotation should give warning to scholars who “discover” this or that “ism” in Mormon literature and then presume to ride that philosophical steed to its usual destination. The paper shows that at its very center Mormonism houses other steeds with other destinations. Often these are not only of a different color but of a different breed.

On this score, Professor McMurrin’s writing is not always flawless. Cases of mistaken identity sometimes compound into omissions and unjustified derivations. An illustration:

1. The discussion of universals (a problem rarely, if ever, treated with much seriousness by Mormon writers) concludes that with respect to “Church” and “Priesthood,” Mormonism tends to be realistic; viz., its writers use language suggesting that these have status over and above their individual instances (pp. 26, 27).

But this, surely, is at most a surface resemblance. Priesthood in Mormon literature is much more clearly a particular than a universal, and is certainly not a platonic non-temporal, non-spatial, entity or form of which earthly instances are copies. As distinguished from a name for authoritative commission, or as a collective name for those who bear it, it is frequently described as a power, close in significance to such (uniquely defined) Mormon terms as “Spirit” or “powers of godliness.” Despite terminological likeness (e.g., “eternal” and “unchanging”), Mormonism derives from this doctrine of Priesthood consequences quite other than those of Greek or Scholastic realism. One does not, for example, need to conceive Priesthood as a universal in Plato’s or St. Thomas’s sense to believe, as Mormons do, that certain official acts may be binding and efficacious though the person performing them is not fully “magnifying” his Priesthood (Cf. p. 26). Nor is the Mormon teaching about the source, proper exercise, and conditions of loss of the Priesthood compatible with the traditional Catholic doctrines of inerrancy, transmission, and divine right. Other differences, not merely verbal, suggest that to identify the Mormon view with “the Catholic theory” obscures rather than clarifies.

Similar comments might well be urged against his use of platonism to describe Mormon value-theory. The Mormon view that values are in some sense objective is closer to certain forms of realism, intuitionism, or naturalism than to platonism. There is, again, his summary statement that Mormonism is “a kind of naturalistic humanism within a general theistic context” (p. 20). Either these three core-terms, or Mormonism itself, must be revised before they belong together. Such comments simply underline a point on which Professor McMurrin is himself insistent: that Mormonism has its own idiom and is frequently falsified when couched in other terms.

2. Another example, this time leading to omission, is his description of the classical vs. Mormon conception of Divine knowledge. With respect to the “Omniscience” of God, we are told that Mormonism denies the non-temporal “eternal now” of classic theology, yet that “his divine knowledge anticipates the future even though the future is yet unexperienced, unique, and undetermined” (p. 14).

Now both for theology and religion, tremendous consequences hang on the resolution of the issue whether Divine foreknowledge is compatible with human freedom or self-determination. Mormonism has distinctive teachings which operate in the definition and resolution of this issue. Professor McMurrin chooses to emphasize the practical implications (e.g., “an utter seriousness of life and moral endeavor” p. 22) which follow from the Mormon conception of freedom and purpose. But if he is correct in ascribing a doctrine of Divine anticipatory knowledge to Mormonism, he should give comparable mention to consequences of this doctrine. Historically these (e.g., calling, covenant, and prophecy) are of at least equal importance.

3. Perhaps this omission is related to another issue on which, again, he is misleading. This is the problem of necessity vs. contingency. Emphasizing the radical thesis of the aseity or self-existence of man, Professor McMurrin points out how inimical this position is to Christian orthodox conceptions of creation, fall, and human finitude. He summarizes by saying that this view diverges abruptly from neo-orthodox accounts of man. So far so good.

But he pushes this view of autonomous intelligences to consequences which, for typical Mormon theology and practice, it does not have. Even among the orthodox and neo-orthodox there are two primal sorts of human contingency. One is the contingency of actuality—that man may, in every sense of being, cease to be. The other is the contingency of potentiality—that man may fail to become what he may become: his potential self, his “authentic self,” a completed person, or “saved.” For most classical and contemporary theologians man is absolutely contingent in both senses. For Mormonism man is necessary or independent in the first sense, as an intelligence. But he is contingent or dependent in the second sense. Indeed, for Mormonism, the question of man’s status must be raised at each of several successive stages or “estates” of his development.

Professor McMurrin tends to argue that Mormonism is required to affirm the second sort of independence as an implication of the first. His final paragraph then ascribes to Mormonism “pelagian and arminian tendencies” which lead to the rejection of certain conceptions of fall, original sin, grace, election, perseverance, and (though unmentioned) atonement.

But the Mormon doctrine of intelligences, free agency, and merit are side by side in its theology with increased and inviolate sets of conditions without which man remains unfulfilled. No less radical than the conception of man’s ultimate origin (“co-equal with God”) is the thesis (not even mentioned by professor McMurrin) of the potential destiny of man. In harmony with this teaching (which shatters several traditional presuppositions), Mormonism has its own doctrines of fall, sin, grace, and atonement or redemption, all of which emphasize man’s dependence. Professor McMurrin’s neglect of these may be due to the summary character of his monograph or to his intention to write a second paper with a theological rather than a philosophical focus.

Aside from these and related problems of content, three things, for this reviewer, emerge from the study:

First, the really radical character of Mormonism is seen. Rejecting or replacing, as it does, many of the axioms of Western tradition, it becomes decisively clear that Mormonism unites, dissembles, and contributes doctrines of a truly revolutionary character. Differences that are delineated are not merely peripheral, but basic—at the very core of its ontology—and nothing is more basic.

Second, other aspects of the latent philosophy of Mormonism are hinted at. If one can more or less accurately discern an ontology in the Mormon literature, what then of other matters: a distinctive theory of knowledge, an ethic, a philosophy of language, of history, of education, of aesthetics, of science? Much clarification, comparison, and integration (which is to say, much understanding and appreciation) might well result from such topical analyses of Mormonism—topics which underly and overly the theology and religion.

Third, the approach itself is established as fruitful. Attempting neither to defend nor to disparage, but simply to describe, McMurrin has, granting limitations of scope and perspective, served as an accurate reporter. Dealing with the assumedly familiar, he yet provides most readers a venture of discovery, of seeing meanings and implications often missed. This is one, perhaps the best, type of philosophical analysis. Both friends and critics of Mormonism may profit from it.

There are, then, distortions and hanging threads. But in the aggregate this is as significant a portrait of the metaphysical implications of Mormonism as has yet been presented. If it is not the first chapter, it is yet the prospectus of many chapters in the yet-to-be-written volume: The Philosophy of Mormonism. An important question, one asked with increasing frequency, is whether such a task should be undertaken. This monograph, and the generally favorable response it has received, should be used in the case for the affirmative. 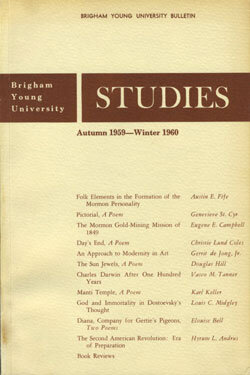 Next:
Outline of History of Utah and the Mormons