The Priestly Tithe in the First Century A.D.

Among the artifacts uncovered during the archaeological excavation at Masada was a terra-cotta pot with these words written on it: maʿaser kôhēn, “priestly tithe.” It is reminiscent of a Herodian-period stone vessel fragment unearthed near the temple mount in Jerusalem, inscribed with the word qorban, “sacrifice.”1 The Herodian vessel fragment also depicts two birds, perhaps indicating that it was used to present doves or pigeons in sacrifice at the temple as specified in Leviticus 12:8.2 Mishnah Maʿaser Sheni 4.10–11 mentions vessels inscribed with qorban or its abbreviation, q, and notes that among the other possible abbreviations on such sacred vessels is m for maʿaser, “tithe”; d for demaʿ, “mixture”;3 and t for tǝrûmāh, the biblical “heave offering”4 due to the priests.5 Several vessels marked with a t were also found at Masada.6 The law of Moses sometimes mentions tithes in connection with heave offerings (Num. 18:24–28; Deut. 12:6, 11, 17). The tithing status of mixtures was uncertain. Because of this uncertainty, only priests were allowed to eat food designated as demaʿ, so it was treated as tithed.

Demaʿ vessels are mentioned in the only metallic document found among the Dead Sea Scrolls, the “Copper Scroll,”7 which is a record purporting to describe where various treasures—possibly from the Jerusalem temple—were hidden. In addition to demaʿ vessels in general,8 this scroll also refers to demaʿ vessels for various types of resin,9 aloes, and white pine10 and speaks of demaʿ vessels of both silver and gold.11 One passage specifically ties the demaʿ vessels to the “second tithe.”12 “Vessels of the sanctuary” are also mentioned in the Bible in connection with tithes and offerings of grains, wine, oil, and frankincense (Neh. 10:39; 13:5). Isaiah 66:20 notes that “the children of Israel bring an offering in a clean vessel into the house of the Lord.”

It was not the vessels that were important, but their contents. Once an offering had been received by the priest and its contents removed, the vessel could be reused for other purposes,13 which explains how the tithe vessel came to be at Masada, some miles from the temple in Jerusalem.14

What Was the Priestly Tithe?

The first mention of tithes is in Genesis 14:20, where we read that Abraham gave to the high priest Melchizedek a tithe of all the booty he had taken from the invading Mesopotamian army he had defeated.15 The Hebrew word is maʿaser, which means “tenth,” which is the way it is translated in Genesis 28:22,16 where Jacob covenanted to give a tenth of all his increase to the Lord.

Some passages indicate that the tithes of the third year were also to be used to help “the stranger, and the fatherless, and the widow” (Deut. 14:28–29; 26:12–13). This use of tithes is reflected in the Joseph Smith Translation of the account of Abraham’s payment of tithes to Melchizedek:

And this Melchizedek, having thus established righteousness, was called the king of heaven by his people, or, in other words, the King of peace. And he lifted up his voice, and he blessed Abram, being the high priest, and the keeper of the storehouse of God; Him whom God had appointed to receive tithes for the poor. Wherefore, Abram paid unto him tithes of all that he had, of all the riches which he possessed, which God had given him more than that which he had need. (JST, Gen. 14:36–39)

This storehouse of the Lord is also mentioned in several Bible passages. King Hezekiah ordered the construction of “chambers in the house of the Lord” for storage of “the tithes and the dedicated things” and appointed Levites to oversee the donations (2 Chr. 31:11–12). When the temple was rebuilt after its destruction by the Babylonians, “chambers for the treasures, for the offerings, for the firstfruits, and for the tithes” were again constructed in the temple, and priests and Levites were placed over these treasuries (Neh. 10:34–39; 12:44; 13:4–5, 12–13). Of the treasuries of this second temple, Malachi wrote, “Bring ye all the tithes into the storehouse, that there may be meat in mine house” (Mal. 3:10). One of the Dead Sea Scrolls, known as the Temple Scroll, also mentions places for storage of firstfruits and tithes.17

By the time of Christ, the rabbis made a distinction between “first tithe” and a “second tithe.” The second tithe comprised one-tenth of what remained of the harvest after donation of the first fruits and the regular tithes to the priests and Levites.18 This tithe was taken to Jerusalem, where the peasant family had to eat it or sell it. This procedure was followed in the first, second, fourth and fifth years of the seven-year agricultural cycle.19 In the third and sixth years, instead of bringing the second tithe to Jerusalem, it was set aside for the poor as the maʿaser ani, “tithe of the poor.”20 The Bible refers only to the tithe of the third year being given to “the Levite . . . and the stranger, and the fatherless, and the widow” (Deut. 14:28–29; 26:12–13).21

From these passages, it is clear that the Israelites were required to tithe the increase of the field, the orchard, the vineyard, and the flocks and herds.24 If an individual lived too far from the temple to bring his produce and animals in, he was allowed to sell them for money and bring his money with him to purchase foodstuffs to present at the temple (Deut. 14:22–27).25 It was also allowable to “redeem” one’s tithe (for example, retain a prize bull calf for one’s own use) by paying a surcharge of one-fifth of the tithe’s value (Lev. 27:13). In such an event, one’s “tithe” would actually be 12 percent.

Originally, tithes were required only of animals and produce raised by man. Mishnah Maʿaseroth 1.1 outlines the “general rule . . . about Tithes: whatsoever is used for food and is kept watch over and grows from the soil is liable to Tithes.”26 The law seems to have excluded animals killed in the hunt and plants that grew in the wild. By Jesus’ time, these also were being tithed, and he chided the scribes and Pharisees for requiring “tithe of mint and anise27 and cummin”—all of which grew in the wild—while ignoring more important parts of the law (Matt. 23:23–24; Luke 11:42). The Temple Scroll, in addition to the normal tithe of grains, wine, oil, and booty taken in war,28 also imposes a levy on animals and honey collected in the wild. But the tithe of things found in the wild was not 10 percent. The scroll requires a payment of 1 percent of the wild birds, animals, and fish thus obtained and one fiftieth of the pigeons and honey, with 1 percent of the pigeons going to the priests.29

Chosen Vessels of the Lord

Offering vessels provide a comparison with human beings throughout the scriptures. Just as an offering vessel can be sacred when presented at the temple and profane when reused for common produce, humans can be sanctified or polluted. In both the Old and New Testament, God is likened to a potter and human beings to the clay from which he makes pots (Isa. 64:8; Jer. 18:6; Lam. 4:2; Rom. 9:20–21; Rev. 2:27).30 Paul compared humans to “vessels of wrath fitted to destruction” and “vessels of mercy,” depending on their obedience to God (Rom. 9:22–23; compare D&C 76:33).31 Elsewhere, the righteous are called “chosen vessels of the Lord” (Moro. 7:31; Acts 9:15). Alma spoke of Mary, the mother of Christ, as “a virgin, a precious and chosen vessel” (Alma 7:10). Similarly, Paul, speaking of chastity, counseled the Thessalonians “that every one of you should know how to possess his vessel in sanctification and honour” (1 Thes. 4:3–5). He told Timothy that he who purges himself from sin becomes “a vessel unto honor, sanctified, and meet for the master’s use” (2 Tim. 2:20–21). The “sanctified” vessel is a clear reference to vessels dedicated to the Lord in the ancient temple. Elsewhere, Paul compares the human body to the temple of God itself, saying that God will inhabit that temple only as long as it remains chaste (1 Cor. 6:18–19). The idea gives meaning to a frequently quoted passage: “Be ye clean, that bear the vessels of the Lord” (Isa. 52:11; 3 Ne. 20:41; D&C 38:42; 133:5). 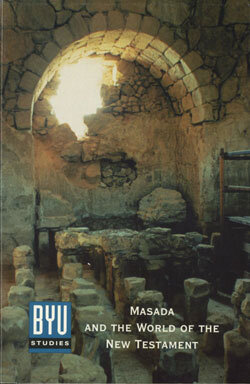 BYU Studies Quarterly 36:3
Next:
The Masada Synagogue and Its Relationship to Jewish Worship during the Second Temple Period

John A. Tvedtnes is Senior Project Manager at FARMS.

1. For a photo and description, see Inscriptions Reveal: Documents from the Time of the Bible, the Mishna, and the Talmud, 2d ed. (Jerusalem: Israel Museum Catalogue No. 100, winter 1973), no. 167. The term qorban (spelled Corban in the King James Bible) appears in Mark 7:11 in reference to an offering authorized by the rabbis in place of the original requirement of the law of Moses that one who curses a parent should die.

2. One is tempted to see, in this vessel, the one referred to in Leviticus 14:5, 50, in which birds offered in sacrifice were to be killed. But the text specifies that this should be an “earthen vessel,” whereas the one found in Jerusalem is made of stone.

3. During the period of the second temple, it was permitted to mix tǝrûmāh with common foods, though the rabbis imposed rules on such mixtures (Mishnah Terumoth 4.7–13; 5.2–9; 7.5–6; 9.4). It is this mixture that the Jews termed demaʿ, a word originally referring to liquid produce (usually wine or olive oil).

15. The Temple Scroll from Qumran requires that a tenth of the booty from war be given to the king, a thousandth to the priests, a hundredth to the Levites, with half of the remainder going to those who fought in battle and the other half to those who remained behind in the cities (11Q19 58.12–15).

18. Detailed instructions for observance of the second tithe are contained in Mishnah Macaser Sheni.

21. A literal reading of these passages could lead one to conclude that, originally, tithes were given only on the third year. This seems to be implied in Amos 4:4. But since a tithe on all produce was required and some produce could not be kept for three years, we can rule this conclusion out.

22. Americans have come to use corn to denote a specific grain—maize. But the word really refers to cereal grains in general and, in the Bible, usually means wheat and barley.

23. Detailed regulations concerning tithing of crops were developed during the Second Temple period. The Mishnaic tractate Maʿaseroth (1.2–8) details at precisely what point in the maturing process various crops were liable to be tithed, describing the physical appearance of each.

24. One of the Dead Sea Scrolls, known as 4QMMT, as reconstructed from two copies (4Q394, 4Q396), requires that a tithe of fruit trees, cattle, and flocks go to the priests.

25. This necessity to purchase foodstuffs explains the presence of moneychangers and sellers of doves in the temple in Jesus’ day. Christ did not condemn what they did, only that they were doing it inside the temple compound rather than in the marketplace (Matt. 21:12–13).

27. Other translations read “dill” instead of “anise.”

28. When Genesis 14:20 says that Abraham “gave him [Melchizedek] tithes of all,” it is generally presumed that he gave him a tenth of the spoils of war referred to in verses 16 and 21. This is how the author of the epistle to the Hebrews read it, “Abraham gave the tenth of the spoils” (Heb. 7:4; italics added). But Alma 13:15 says that “Abraham paid tithes of one-tenth part of all he possessed,” while the Joseph Smith Translation, Genesis 14:39, cited earlier, says “Abram paid unto him tithes of all that he had, of all the riches which he possessed, which God had given him more than that which he had need” (italics added).

31. Christ, speaking of the Judgment, compared people to fish gathered in a net, which the fishermen sort, placing “the good into vessels, but cast[ing] the bad away” (Matt. 13:47–49).