The Restoration Movement is a collection of essays on various facets of Mormon history, written by scholars of the Church of Jesus Christ of Latter-day Saints and the Reorganized Church of Jesus Christ of Latter Day Saints (LDS and RLDS). Following an introductory essay, Chapters 1–8 concern themselves with the early Church in New York, Kirtland, Missouri and Nauvoo, and with the movements arising just after the death of Joseph Smith. This covers the first 30 years of the restoration. The next 112 years are represented by the final four chapters, either as summary articles or as articles on some aspect of Mormon history subsequent to 1860.

Apparently the editors hoped for a work, with some continuity, which would provide in one volume a general outline of the restoration movement. The principal weakness of the book, however, lies in the absence of uniformity. Certain articles broadly survey a particular era, while others focus narrowly on a specific problem. More disconcerting than this, some of the essays were obviously written for the expert, while others appear to have been written for the novice. The editors explain that they did a minimum of editing in order to retain the flavor of the various backgrounds. A large editorial role, however, would have improved the book.

The work begins with an introductory essay by Klaus J. Hansen. While one would expect an introductory essay to introduce the book, it is becoming more prevalent in scholarly books to have an introduction that only generally relates to the subject; but that doesn’t make it less objectionable, particularly when the introduction is quite esoteric. Hansen’s essay is a pretentious look at Mormonism and its relationship to other contemporary millenarian religions, which ends with the question whether Mormonism as a cultural entity even now exists. As John Sorenson has aptly commented on this essay: “Hardly a concept in the historian’s and behavioral scientist’s armamentarium is omitted, all somehow part of or related to ‘Mormon culture.’ Yet we never learn what that elusive thing is. When we reach the concluding query (‘Is it possible that as a distinct cultural entity, Mormonism has more or less ceased to exist?’) the vagueness of ‘cultural’ and ‘Mormonism’ has robbed the question of meaning” (Dialogue 8:2, p. 19).

The next two essays by Larry Porter and Max H. Parkin are summaries of the Church in New York and Ohio, distilled, respectively, from Porter’s dissertation and Parkin’s thesis. Dr. Porter’s essay leads one again to wonder if, except for the revival controversy, there is anything new to be found in the history of the Church in New York. Parkin provides a good introduction to the history of Kirtland, as well as a rather superficial discussion of the elements which eventually caused the expulsion of the Church from Ohio. This article and the recent Charles Redd Lecture on the economics of Kirtland by Marvin Hill, Larry Wimmer, and Keith Rooker (15 January 1975 at Brigham Young University) point up the need for considerable additional work on two aspects of Mormon Kirtland: economics and polygamy.

Following these are two essays on the Missouri period, both more restricted in scope. Warren Jennings discusses social conflict in Jackson County where, given the Mormon Zionism, its northern background, and its seeming willingness for the participation of blacks, there was bound to be conflict. In retrospect, the point seems so obvious that one hates to see the Jackson County episode so summarily dismissed.

F. Mark McKiernan does better for the last part of the Missouri phase, picking up the story with Smith and Rigdon coming into Far West and ending it with their arrest. As in his book The Voice of One Crying in the Wilderness, Dr. McKiernan seems to place far too much emphasis on Sidney Rigdon. His reliance on Reed Peck for the Salt Sermon seems a bit risky, as does his uncritical acceptance of Corrill and Hunt. There are also some clear errors, for example, his assertion on page 125 that the entire Mormon hierarchy crumbled as a result of desertions.

Robert Flanders takes up the story of Nauvoo. As in his Kingdom by the Mississippi, Flanders’ emphasis is on failure, and he misses the point of Nauvoo. Nauvoo, like the classic tragic character, should not be viewed by its final failure, but for what it almost accomplished.

T. Edgar Lyon’s article on Nauvoo and the Council of Twelve and Alma Blair’s essay on the beginnings of the RLDS Church constitute the highpoints of the volume. Lyon’s Nauvoo expertise is apparent as he traces the evolution of the Council of Twelve as a ruling body, a theme that has been enlarged upon by Michael Quinn in the first issue of the Journal of Mormon History. Blair’s treatment of the emergence of the RLDS Church is characterized by insight and candor, little touched by polemic.

William D. Russell following with an essay on James J. Strang, whose story has been told elsewhere as ably. Russell’s idea that Strang was a serious threat to Brigham Young is unjustifiable; Strang certainly took away some of the membership of the church, but there is scant evidence for the idea that Young’s leadership with the majority was ever in doubt.

The next three essays are of little consequence. Leonard Arrington and Michael Quinn’s essay on the Church in the far west is particularly disappointing in view of the high quality work Arrington has produced in the past. Davis Bitton’s article on life styles states, in effect, that the Utah Mormons built homes with what was available, ate what was available (with due regard for the Word of Wisdom), and did what most other people on the frontier did for leisure activities. The value of the article lies in the quotes from various diaries. James Allen’s essay is a pleasant summary of Mormonism in the twentieth century for those who do not have access to his Mormonism in the Twentieth Century, updated in Dialogue (Spring 1972).

The final essay by Paul M. Edwards concerns the supreme directional control battle within the RLDS Church after the ascendancy of Frederick M. Smith. His statement that the problem raged in the 1960s requires elaboration, and his concluding analogy between the RLDS Church and the nation seems rather dubious.

Finally a word should be said about bookmaking. In addition to containing numerous errors, the book is cheaply bound and poorly printed; the review copy, for instance, has a blank page 191. For the price, one would hope for a better job. 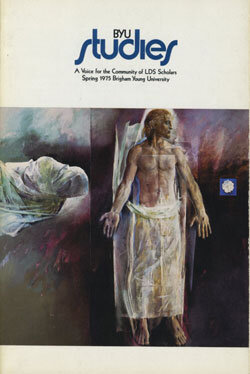