How to Think in This World but Not Think With It

Think Independently: How to Think in This World but Not Think With It, by Chauncey C. Riddle (Provo, Utah: Rescate, 2009).

Chauncey C. Riddle, emeritus professor of philosophy at Brigham Young University, has placed an attractive capstone on his professional life with a slim and readable volume that will be of great interest to any Latter-day Saint with a strong philosophical bent. Even those without such a bent will find the book understandable and thought-provoking.

Riddle received his MA and PhD from Columbia University, and adds to his education four decades of experience as a philosophy professor. Each thought in Think Independently is carefully crafted; readers will likely have the sense that behind every sentence is a lifetime of examining, weighing, and pondering—often in a wonderfully nonlinear way that is peculiar to the mind of the philosopher.

Chapter 1 argues that, historically speaking, all the sciences grew out of philosophy. Riddle notes that many scientific disciplines have recently worked to distance themselves from the auspices of philosophy by means of accepting only empirical evidence; however, he effectively argues that they have not escaped their various philosophical underpinnings.

The theory of organic evolution as propounded by Darwinists, however, takes a giant philosophical leap away from what is observable. Darwinism claims that life sprang up through random chemical processes, and that through natural selection life evolved without the need of a supernatural first cause or divine intervention. Such a theory, something like a secular version of Catholic creatio ex nihilo, is completely unobservable and must be taken on faith. “The problem comes in that some persons wish to attach the surety of the law of evolution to their favorite conjecture: the theory of organic evolution” (56).

However, this volume is much, much more than a call for scientists to humbly admit their underlying philosophical assumptions. The book is intended for a very broad audience, for, as Riddle recently said to me, “All people have a philosophy, even if they don’t know it.” The nine chapters within the book explore epistemology, metaphysics, ethics, art and aesthetics, and several different wordviews, all within the framework of revealed religion.

The mode of language Riddle employs moves seamlessly between that of rational philosophy and religious devotion. Such a linguistic mix might be arresting to both religious and scientific purists, but most Latter-day Saints, comfortable with the injunction to learn “by study and faith,” will find the intermingling refreshing.

In his approach, Riddle may strike some as too prescriptive, often using language that is quite authoritative and declarative, something akin to a dictionary definition. The trade-off is a book that can, in only 146 pages, satisfactorily cover nearly every major philosophical conundrum faced by the faithful, as well as nearly every powerful philosophical idea that emboldens Latter-day Saints to keep the faith and “to become independent of the foibles and pitfalls of a fallen world” (146). For those with an abiding interest (or even a hint of interest) in philosophy within an LDS context, I highly recommend Think Independently. 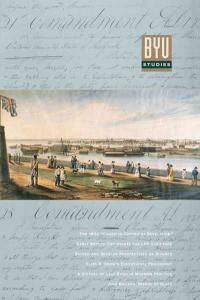 BYU Studies Quarterly 50:2
Next:
A Search for Place