A Statistical Approach to Chiastic Intentionality

Chiasmus is an ancient inverted-parallel literary form that states a number of literary elements and then restates these elements in reverse order. For example, Matt 10:39 is a simple two-element chiasm:

The only way to know for sure about the intentionality of a chiasm is for its author to state whether he intentionally applied the chiastic form during composition. In many cases of interest, no such statement exists, and scholars are left to assess intentionality using only the text of the chiastic passage itself. To this end, several scholars have proposed criteria for evaluating chiasms,2 and we have introduced statistical tools for such evaluations.3

In this paper, we apply these tools to a chiasm in a physics abstract to demonstrate the importance of including all repeated literary elements in the analysis.

The following chiastic structure can be found in the abstract of a physics research publication written by one of us (B. F. Edwards).4

For example 2, the likelihood that random rearrangements (such as the non-chiastic arrangement DAEBCEDCAB) will be chiastic is L = 0.0011.6 This value is well below 0.01 and therefore provides strong evidence of intentionality.

The problem is that this chiastic structure was not actually intentional! B. F. Edwards asserts that he did not consciously, intentionally, or deliberately apply the chiastic form in writing this abstract.

Some suggest that writers who know about the chiastic form, as B. F. Edwards did when he wrote this abstract, might incorporate this form subconsciously into their writing.7 To be successful, such a process would need to be powerful enough to modify the conscious process of writing and rewriting in search for a logical organization of ideas, so that the end result would be chiastic. B. F. Edwards doubts that such a subconscious process was at work.

A simpler explanation for the chiastic structure of this physics abstract is revealed by accounting for all repeated elements in the text:

Besides the appearances of elements A, B, C, D, and E that fit the chiastic form (in bold face, also shown in example 2), there are two extra appearances of element A that do not fit the form (in italics). In addition, there are two other element pairs, F [“advects / advection”] and G [“direction”], that could have participated in the chiastic structure, but do not (also in italics). Thus, in example 3, ten elements fit the chiastic form (five pairs of chiastic elements, in bold face) and six elements do not (in italics). Because of these elements, the case for intentionality for example 3 is less compelling than for example 2.

When the elements that do not fit the chiastic form are included in the statistical analysis, the evidence of intentionality disappears. Because of these elements, example 3 is not simple and its likelihood does not equal L = 0.0011 (for example 2). Instead, we must calculate the likelihood that chiastic structure with five elements could appear in random rearrangements of all of the elements in example 3. This calculation gives L = 0.044.8 This value falls between 0.01 and 0.1, the inconclusive range, and therefore erases the strong evidence of intentionality drawn from example 2.

Values of L that are larger than 0.1 say nothing about intentionality. They do not say whether or not the author applied the chiastic form in composing the text. Statistics cannot prove that a chiasm was inadvertent but can provide evidence of intentionality when the likelihood of appearing by chance is below 0.01 and when all repeated elements are included in the analysis.

In the case of the physics abstract, we have more information than statistics can provide. We know that its chiastic structure was inadvertent because its author asserts that it was. And a careful statistical analysis including all repeated elements is consistent with this conclusion.

There is no need to invoke the subconscious mind to explain how chiastic structure with five elements made its way into the physics abstract. Why? Because once all repeated elements are accounted for, this structure has a reasonable likelihood (L = 0.044) of appearing by chance, that is, of appearing in random arrangements of the words in the abstract. The chiastic structure of the abstract appeared not by design (conscious or subconscious), but by chance. Cherry picking only those elements that fit the form would give a small likelihood (L = 0.0011) of appearing by chance and strong (but erroneous) evidence of intentionality.

Inadvertent chiastic structure in an INFORMIX-OnLine Database Administrator’s Guide Introduction provides another example. Including only the elements that fit the form gives L = 0.000000029 for a simple chiasm with nine elements, which would give strong (but erroneous) evidence of intentionality. Correctly including all repeated elements gives L = 0.66, which gives no evidence of intentionality.9 In this example, eighteen elements fit the chiastic form (nine pairs of chiastic elements) and thirty-nine elements do not. It is these extra elements that provide the flexibility needed to easily find chiastic structure with nine elements, which would have been extremely unlikely otherwise.

In our analysis of hundreds of chiasms in various works, we have seen this scenario played out time and time again: Someone proposes a chiastic structure that looks compelling at first glance (like example 2), but closer inspection reveals many repeated elements that do not fit the structure (like in example 3). After accounting for these elements, the evidence of intentionality disappears.

We have never found a chiasm for which the subconscious explanation is necessary.

Enthusiasm for chiasmus has led to the discovery of stunning examples of chiasmus. But this enthusiasm has also produced many chiastic proposals of dubious intentionality. As shown above, accounting for all repeated elements can help to distinguish compelling examples from weak ones. To promote integrity, chiastic analysts should account for all repeated elements in their assessment of each new chiastic discovery. 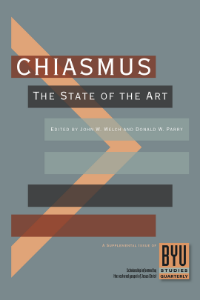 BYU Studies Quarterly 59:2 - Supplement
Next:
The Roles of Words, Phrases, and Ideas in Macro-Chiasms

Boyd F. Edwards is professor of physics at Utah State University, in Logan, Utah. His coauthor and father, W. Farrell Edwards, is professor emeritus of physics at the same institution. Together they have co-authored four articles using statistical analysis to evaluate chiasmus: “When Are Chiasms Admissible as Evidence?” (BYU Studies); “Does Joseph’s Letter to Emma of 4 November 1838 Show That He Knew about Chiasmus?” (Dialogue Paperless, E-paper); “Response to Earl Wunderli’s Critique of Alma 36 as an Extended Chiasm” (Dialogue); and “Does Chiasmus Appear in the Book of Mormon by Chance?” (BYU Studies).

We acknowledge insightful correspondence with David Clark and Stephen Ehat on chiastic intentionality and especially appreciate receiving a copy of Ehat’s detailed compendium of writings on criteria for the evaluation of chiasmus.

The work in this paper was presented originally at “Chiasmus: An Open Conference on the State of the Art,” held on August 15, 2017 in Provo, Utah.

6. Edwards and Edwards, “Does Chiasmus Appear in the Book of Mormon by Chance?” 115.

8. The value L = 0.044 was obtained using a computer program to make ten million random rearrangements of the elements of example 3, with the result that 4.4 percent of these rearrangements show five-element chiastic structure. This is the data entry for this program, and its output:

Readers interested in using this program to analyze chiasms are invited to write to B. F. Edwards, boyd.edwards@usu.edu, for a free copy. Versions for Macintosh and PC are available.

9. Edwards and Edwards, “Does Chiasmus Appear in the Book of Mormon by Chance?” 125.

10. Edwards and Edwards, “Does Chiasmus Appear in the Book of Mormon by Chance?” 110.