Under the Banner of Heaven

A Story of Violent Faith

Jon Krakauer. Under the Banner of Heaven: A Story of Violent Faith.
New York: Doubleday, 2003.

On the face of it, Jon Krakauer’s latest piece of investigative journalism is a gripping and gruesome story of the men behind the 1984 murders of Brenda and Erica Lafferty in American Fork, Utah. Dan and Ron Lafferty, members of an upstanding Latter-day Saint family in Utah, had become involved in the world of Mormon fundamentalism. It was through their participation within this network of polygamous clans led by charismatic leaders that the Lafferty brothers became convinced that plural marriage should never have been abandoned, and it was also there they discerned that God had called them to kill the wife and infant daughter of their youngest brother, Allen.

Krakauer, a writer who has previously narrated accounts of high adventure on Mount Everest and in the wilderness of Alaska, clearly revels in tales of people who push the bounds of ordinary human experience. Accordingly, in this latest book he draws together research on the history of Mormonism, newspaper accounts of the murders, and interviews with both the convicted murderers and those connected with them, to render a dramatic and evocative description of the crime.

Yet as he also explains, his underlying motivation in taking on this assignment was to better “grasp the nature of religious belief” (333). The murder itself thus serves as an important culmination to a much larger story of how fervent religious faith—and specifically, in this case, Mormon faith—can lead to violent ends. How does religion beget both power and violence? In turn, how can a pluralistic society that affords freedom to many religious traditions adjudicate between piety and social pathology? All of these questions are important and worth asking. The problem is that Krakauer already has answers to those questions, and his biases get in the way of exploring the full range of circumstances surrounding the murders. As a result, ironically, he thereby misses opportunities to probe more deeply into the complexities of religious faith.

Less than the Lafferty brothers themselves, Mormon fundamentalists are the primary object of Krakauer’s investigation. Traveling to southern Utah, he interviews inhabitants of the town of Colorado City, a largely polygamous enclave, exploring their patriarchal and racist politics, their antipathy toward the U.S. government, and their family practices. He also visits several disaffected members of these groups who have horrifying stories of abuse to tell. Yet the author slants the picture from the start through the language he uses to describe them and the implicit associations he draws. Although they are clearly connected in some instances, he conflates polygamy with child abuse, welfare fraud, racism, and western survivalism, as if they were all one and the same thing. Employing words such as “fire-breathing” (146) and “convoluted” (33) to describe the temperaments and practices of fundamentalist Mormons, Krakauer so exoticizes these inhabitants that it becomes nearly impossible to imagine how outsiders like the Laffertys might well be drawn to them.

Krakauer also implicates the LDS Church as a primary accessory to the murders. By crosscutting chapters about the murder with narratives of early Mormon history and interviews with contemporary Mormons, he invites the reader to connect the dots that cannot be linked through the evidence he offers. Moreover, his descriptions of present-day Saints bear a distinctly condescending tone, from details of the “ersatz fog” at the Cumorah Pageant in New York State to the RVs driven by pageant participants (he mentions the “comb-over” sported by one church member not once, but twice [65–66]). Mormons are “God-besotted” (204) at best, and Krakauer takes pains to indicate that for all their clean-cut orderliness and everyday American wholesomeness, the LDS approach to life disguises something darker. “Make no mistake,” he insists, “the modern Mormon Church may now be in the American mainstream, but it usually hugs the extreme right edge of the flow” (331). The Mormon history he relates as background to the murders is also a decidedly selective one, highlighting the most violent episodes as if to suggest the inevitability of this crime.

There are several major flaws in his logic. First, in linking fundamentalist Mormons to the contemporary LDS Church, Krakauer has to downplay considerable evidence to the contrary. He dismisses out of hand the persistent claims (on both sides) that the two are only connected through a history from nearly a century ago and adherence to a common text (which they read very differently), or the fundamentalist adamancy that the LDS Church is heretical. He reports this evidence but follows much of the data with “nevertheless,” or “but all the same,” (5) as if to dismiss its relevance to the real truth of the matter. Yet his claims are roughly analogous to arguing that Christians and Jews are really the same because they both read the Hebrew Scriptures, or that Protestants are in some way to blame for the sexual scandals in the Roman Catholic Church because they share a common history (which is considerably bloodier than the history of the Mormons). Ultimately, all of the associations Krakauer wants to make are inferential.

Moreover, those associations distract from equally important issues. By portraying the inevitability of violence within the Mormon tradition, by juxtaposing a brutal murder to the “peculiar obsession with blood and vengeance” (277, quoting Will Bagley, Blood of the Prophets) he finds in early Mormon history, Krakauer leaves almost totally unexplored the larger American tale of religious intolerance and persecution that led to this violence. Would early Mormons have been similarly driven to violence without the continuous and systematic harassment they endured at the hands of the United States government? Indeed, all of the other features of Mormon faith that he outlines—schismatic tendencies, mystical practices, apocalyptic beliefs, and restorationist leanings—can be found in full measure in other religious traditions. The major distinction lies in Mormon persecution at the hands of federal authorities, motivated by imperial claims on Utah territory—treatment that eventually (although not initially) led to a deep-seated suspicion of outsiders and a fear of further attacks. To see the Mountain Meadows massacre, for example, only as an episode that “exemplified the fanaticism and concomitant brutality of [Mormon] culture” (208) is to leave out at least half—and possibly the precipitating half—of the story. Pointing out this omission does not constitute apology for any acts of violence by Mormons in the past, but it does force one to ask whether religion as such is really the primary issue here. As Krakauer himself briefly mentions (but fails to pursue) at the conclusion of the book, the “blood atonement” (308) practiced by the U.S. government in the form of the death penalty may better explain an ideology that sanctions violence than do the actions of nineteenth-century Saints.

What, then, ultimately led to the murder of an innocent woman and her child? Although Krakauer singles out Mormons for vilification, members of that church should not feel alone. In his view, the real culprit is religious faith itself. In the introduction he expresses his conviction that belief in God is fundamentally irrational and its culminating logic is violence (xxi). He is fascinated by believers for the same reasons that he finds mountain climbers or wilderness adventurers intriguing—they are people who push the envelope. In this case, that is the envelope of rational behavior. “All religious belief is a function of nonrational faith. And faith, by its very definition, tends to be impervious to intellectual argument or academic criticism” (68). For the author, there is an essence of groundless conviction inherent in religious belief, a “dark side to religious devotion” that, irrespective of social, political, economic or other factors, leads in some cases, “predictably,” to evil deeds (xxi).

One could surely take issue with this caricature of the anti-intellectual zealot. But my frustration is that Krakauer’s own convictions (his faith in secularity?) blind him to so many other questions and avenues of exploration. His own faith, a faith in secularity as a tempered antidote to religious fanaticism (a term that is, for Krakauer, ultimately a redundancy), obscures a nuanced discussion of the complexities of religious faith and its relationship to other potential precipitants. This book is well-crafted and compelling, but it misses the opportunity to investigate the many factors that undoubtedly motivated the Lafferty brothers. What roles did poverty, child abuse, family dynamics, drug abuse, or state-sanctioned violence—all of which were prominent features of their lives—play in shaping their worldviews? Was religious faith a causal factor or simply an idiom for the expression of feelings generated by something else? Is it possible that fundamentalist Mormons are not guilty of causing this murder but are culpable of tolerating other forms of violence? A singular focus on religious extremism, and a narrative in which early Mormon history inexorably culminates in murder, has to explain away too many other things. Krakauer cites Mikal Gilmore, the journalist and younger brother of Gary Gilmore, who elucidates the violence of his sibling by discussing child abuse, family history, and many other factors that present a complex portrait of how and why some people turn to violence. Would that Krakauer could have seen beyond Mormonism in his own quest for enlightenment. 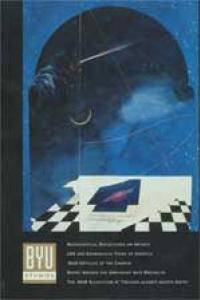 Previous:
By the Hand of Mormon

Laurie F. Maffly-Kipp is Associate Professor of Religious Studies at The University of North Carolina at Chapel Hill. She received a BA from Amherst College, and a PhD from Yale University. Her expertise is religious history of the American West and African-American religious history. She is currently the co-director of the History of Christian Practice Project, a four-year initiative sponsored by the Lilly Endowment, Inc. She has also served on the editorial boards of Church History and The North Star. In 1999 she gave the Tanner Lecture at the Mormon History Association annual meeting. She is a member of the United Church of Christ.