Jews and Latter-day Saints in Dialogue

Organized topically, this book’s sixteen essays provide a wealth of information about Jewish and Latter-day Saint perspectives, scripture, experience, worship, culture, and politics. However, at least for me, the true treasure of these essays is not so much informational as it is relational.

In my experience, interfaith meetings frequently bear an uncanny resemblance to middle-school dances: occasions where two groups very much want to get to know each other but have absolutely no idea how to do so. Consequently, they hang back, occasionally venturing forth to make awkward, momentary contact, only to quickly retreat to the safety of their respective camps afterwards. With this book, Jewish and Latter-day Saint scholars from Loyola Marymount University; Brigham Young University; Hebrew Union College–Jewish Institute of Religion, Los Angeles; and the Academy for Jewish Religion California attempt to remedy this situation not only by offering their readers several “good practices and lessons learned about successful interfaith dialogues” (xiv) but also by demonstrating in essay form what such a dialogue looks like and what it can lead to.

Even before their first meeting, participants in the Jewish–Latter-day Saint Academic Dialogue Project, as these scholars called their effort, recognized that interfaith dialogue, if it is to be productive and meaningful, must be conducted within a framework of a close relationship and that such a relationship can only be built over time. As a result, they stipulated that in order “to build sufficient friendship and trust,” they would start their discussions off small, with no more than six people from each faith group present, and that they would meet twice a year for the first two or three years. Certainly, they would hold public sessions so that their efforts would have “broad impact,” but, as they saw it, the main work of this project would occur in small “closed-door, academic sessions” that would “preserve the ability of dialogue participants to express themselves openly” (5).

These scholars also agreed to start off cautiously and begin with discussions of “areas of commonality” before venturing into “areas of challenge and potential friction” (5). However, as two essays presented during their first meeting show, such caution does not mean that participants in these discussions should simply praise each other superficially or gloss over their differences. In “What Jews Can Learn from Latter-day Saints: Insights from The Church of Jesus Christ of Latter-day Saints,” Jewish scholars Steven Windmueller and Mark S. Diamond inaugurate these discussions by reviewing “key features of the Church of Jesus Christ [that] have parallels in Jewish life and thought” (366), and although they generally refute any assumption of close similarity between these features, they set the tone for future discussions by suggesting how Jews can profit by adopting some aspects of Latter-day practice and adapting them for their own use.

In “Ancient Foundations of a Modern Religion: Latter-day Saints and the Hebrew Bible,” BYU professor Shon D. Hopkin continues along these same lines, by affirming that Latter-day Saints also have much to learn from Jews. As he points out, the emotional connection that many Latter-day Saints feel with Jews is often based on an “imagined” view of Jews that arises more from their own idiosyncratic reading of scripture than from actual experience. This underinformed “enthusiasm,” Hopkin readily admits, is a problem since it is often “mistrusted or found annoying or naively entertaining” by Jews. However, as he argues, it can also serve as a foundation for future dialogue that “must lead to more solid information” (32).

Much as these two essays form a kind of introductory “mini-dialogue” which other interfaith groups can emulate, so other essays, presented in subsequent meetings, are paired in such a way as to highlight other elements of effective dialogue. For example, Hopkin’s “Latter-day Saint Liturgical Practice: The Psalms and the Day of Atonement” immediately follows Tamar Frankiel’s “Jewish Liturgy and the Religious Imagination.” In it, Hopkin not only links Latter-day Saint worship to the Mosaic temple, much as Frankiel does with rabbinic worship, but he also demonstrates how and why one should sympathetically immerse oneself in another’s faith experience. As he writes,

In Latter-day Saint worship services, an opening hymn is always sung, demarcating the movement into sacred time and space, a movement into a holier sphere. The second hymn, usually sung by the congregation prior to the ordinance of sacrament, then signifies an additional movement into an even holier space, a holy of holies in which Latter-day Saints seek to symbolically enter into the presence of God through the sacrament ordinance. The closing hymn demarcates the end of this sacred time and a movement back into more typical patterns of behavior and speech. (280)

Given the general antipathy to symbolic ritual felt by many Latter-day Saints, it is remarkable that Hopkin sees suggestions of one in the sequence of hymns present in what is often considered a “low church” meeting and that he views these suggestions positively. Not only does this essay show that Hopkin is hearing Frankiel’s words, but it also demonstrates that he is internalizing her concepts and applying them to his own religious experience in ways that deepen that experience and enhance his understanding of it.

Similarly, Joshua D. Garroway’s “A Jewish View of Paul” follows Thomas A. Wayment’s “Latter-day Saint Engagement with Paul: Status Quaestionis,” and Brent L. Top’s “Guardian of Faith: The Sabbath in Latter-day Saint Theology, History, and Practice” follows Diamond’s “Shabbat in Jewish Thought and Practice.” In both of these pairings, each presented in subsequent meetings, a scholar from one faith reexamines a fundamental aspect of that faith and attempts to explain it in terms scholars from another can appreciate. The scholar from that other faith then responds and does so respectfully, thoughtfully, and honestly, often asking penetrating questions and providing fresh perspectives. In this way, these pairings, as well as others, demonstrate, in an almost step-by-step fashion, how deep and productive interfaith relationships are developed over time.

Probably the most poignant example showing just what a well-developed interfaith relationship looks like is found in Garroway’s essay “Supersessionism in The Church of Jesus Christ of Latter-day Saints: A Jewish Response.” As its title suggests, this essay is a reaction to an essay written by LDS scholars Jared W. Ludlow, Andrew C. Reed, and Hopkin that reviews how Jews and Judaism have been presented, both good and bad, in the Book of Mormon, in the Doctrine and Covenants, and by Latter-day Saint Church leaders. This LDS essay is the longest essay in the book and was undoubtedly difficult for these scholars to write. Nonetheless, they persevered, convinced that “as Latter-day Saints and Jews engage with one another in honest dialogue, they must eventually encounter the hard parts of theological differences” (90).

And Garroway’s response, the shortest essay in the book, must have been difficult for him to write as well. Although he acknowledges that “the Latter-day Saint perspective of Jews appears less supersessionist” than other Christian faiths, he finds it “unnerving” that Latter-day Saint scripture does not deal with modern rabbinic Judaism and that Latter-day Saints seem to see Jews “one-dimensionally,” not as real people but as theological “avatars that stand in for the real Jewish people who either lived in the hoary past or will live again in an ideal future” (141).

Garroway’s irritation is palpable as he expresses a general Jewish wish to be seen by Christians much as Christians, he assumes, would wish to be seen by Jews—“as living, breathing people with the same sorts of struggles, fears, and aspirations as anyone else” (143). Nonetheless, despite these feelings of frustration, Garroway takes comfort in the relationships that he and the other participants in the Jewish–Latter-day Saint Academic Dialogue Project have formed. He ends his essay, “What has pleased me thus far about our Jewish–Latter-day Saint dialogues is my confidence that the participants on both sides aspire to exactly that sort of perspective when regarding one another” (143).

As I see it, this is the ultimate goal of interfaith dialogue—for participants to truly see each other and come together in a close, informed, mutually respectful, and mutually beneficial relationship—and I think this book represents a significant step forward in reaching that goal, especially for Latter-day Saints and Jews. Along these lines, I wish that the paired essays in this book were arranged more chronologically, according to the sequence described in appendix 2, so that the development of this kind of a relationship would be more apparent. I also wish that more scholars from the other branches of Judaism, specifically the Conservative and Orthodox movements, could be involved.

However, in the end, my only major criticism of this book is that it is too short. Even after reading nearly 400 pages, I wanted more. I wanted discussions on the religious and cultural effects of a western pioneer heritage versus a more eastern immigrant experience. I wanted comparisons between efforts to obey the Word of Wisdom and like-minded efforts to keep kosher. I wanted analyses of the differences between fast offerings and tzedakah, repentance and t’shuvah, conversion and giyur, seminary and midrasha. I even wanted studies of the similarities between doing temple work for distant ancestors and saying kaddish for deceased grandparents. Jews and Latter-days Saints have so much to discuss and so much to learn from each other. My only consolation is that this book is volume one of a series of volumes that promises to go on and on, and I, for one, am eager to read them all. 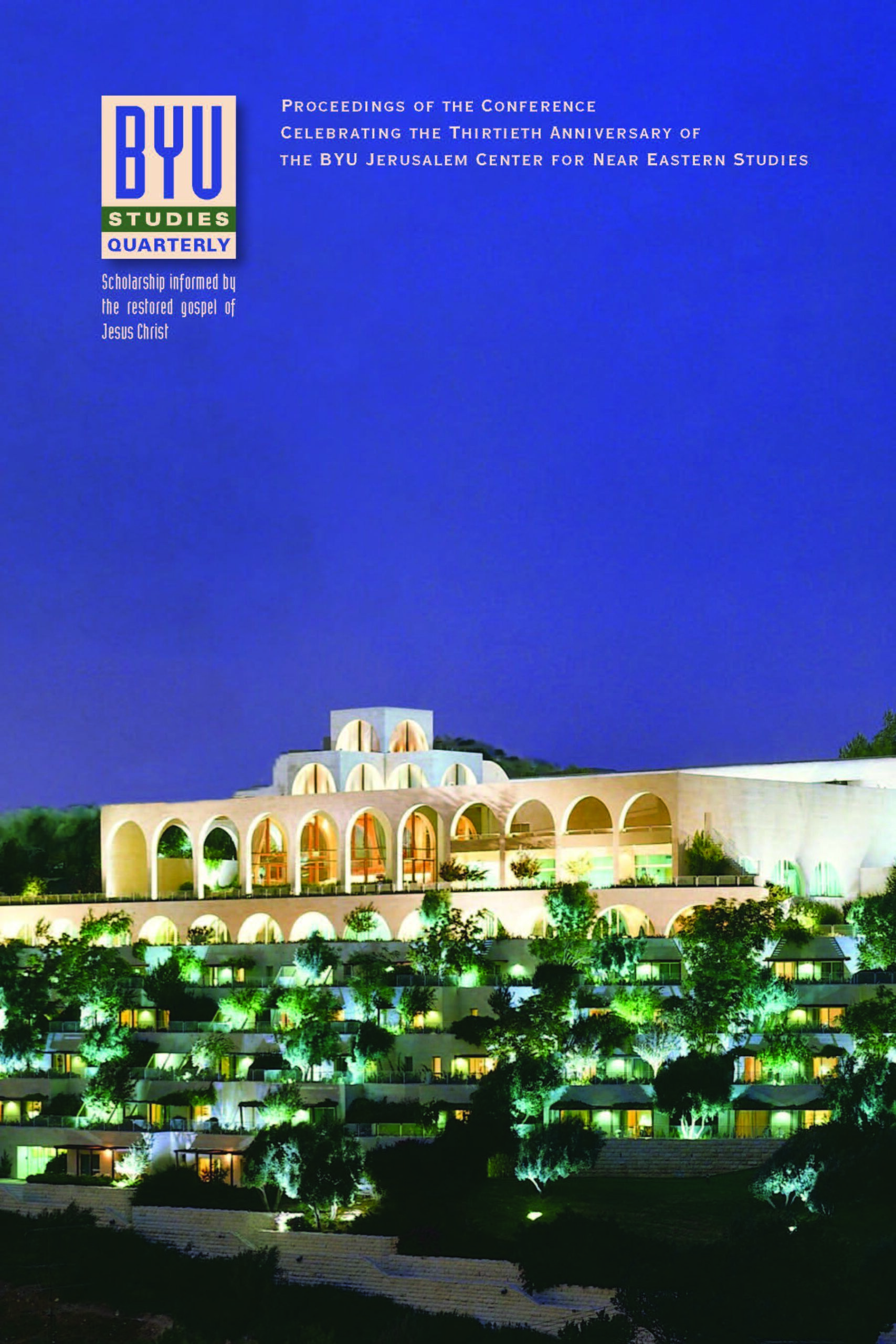 BYU Studies Quarterly 59:4
Next:
The Annals of the Southern Mission

Bradley J. Kramer is the author of Beholding the Tree of Life: A Rabbinic Approach to the Book of Mormon as well as Gathered in One: How the Book of Mormon Counters Anti-Semitism in the New Testament. He holds an MA in English from the University of North Carolina at Chapel Hill and a BA in English from Brigham Young University with a minor in Near Eastern Studies. As the son of an LDS mother and a non-LDS father, he has had a lifelong interest in interfaith dialogue. For over fifteen years, he has been a regular participant in Torah and Talmud classes at a local synagogue in Durham, North Carolina, and has helped arrange joint Jewish–Latter-day Saint study sessions and other educational exchanges.