Wandering On to Glory

In my suburban town, commuting is a fact of life, every bit as much as sowing and reaping and harvesting probably were for my agrarian forebears. It’s simply a given that work is far away and that a good portion of every day is spent getting there in the morning and then getting back again later on.

Like my fellow suburbanites, I start my day gearing up for the trek to work, preparing for the daily battle—with the highway and traffic and fatigue and rude drivers—that makes up part of modern life. Turning on my audiobook, downloaded thanks to the mercies of the county public library, I lose myself in the sonorous intonations of some talented reader who transports me into the world of a great book, and I’m aware that, for the first twenty minutes or so of the trip, I’ll be transfixed by the magic of the spoken word.

Even the power of the audiobook, though, can only take me so far, and I’m painfully aware that at some point in my traveling, especially during the winter months when the earth and sun conspire against me to ensure that I’m driving in darkness, I’ll start getting sleepy and have to struggle with eyelids that want to droop and a head wishing to still be blissfully nestled into my pillow.

From the moment the sleepiness begins—the distance from home to the onset of fatigue being one of the indicators of a good or bad travel day—it’s a struggle to keep my head in the game and overcome the morning tiredness. I’ve got a variety of weapons at my disposal: scanning through the radio stations, singing aloud, and even, on the worst of days, commentating to myself on road conditions.

The endless stream of taillights ahead, the familiar office buildings and freeway exits zooming by (have I really only made it as far as that one!), the slow, slow brightening of the eastern sky as the day, too, begins its commute—all give clear evidence that I’m moving ahead, albeit slowly, and making progress mile by mile.

The middle of the trip is the worst. It’s at this point that I’ve traveled a good distance but am still a long way from my destination. This is where I’ve got to mentally prepare myself for the rest of the commute, to focus more on the audiobook or on the radio, to battle the dreary sameness of a road I traverse twice a day, five days a week, four weeks a month, twelve months a year.

The sameness, I sometimes think, is the hardest part of the commute. It’s the fact that I’ve been here before (just twelve hours ago, in fact) and that I’ll be here again soon (just this evening, as it happens). Other than the occasional heavier-than-normal congestion or the odd traffic accident, it’s the same old road, same old intersections, same old backups. Some days I’m sure I’m seeing the same cars I saw the day before.

I sometimes contrast the monotony of the commute with what I imagine to be the constant discovery involved in another kind of travel—the journey. The journey, in my mind, involves no sameness or boredom. It’s movement from point A to point B without repetition and without tedium or boredom. I know intellectually that the great one-way journeys probably involve plenty of colorless moments, even perhaps more than the other kind. But my mental image of the process of journeying involves a more or less continuous encounter with the new and unexplored. It involves Huckleberry Finn and Jim growing and finding as they move down the river to freedom, Frodo Baggins as he carries the ring to Mordor, the Joads struggling toward an elusive Californian promised land.

The journey is encountering and assimilating the unconsidered and heretofore unimagined. It is the Little Prince departing asteroid B 612 for parts unknown; it is Columbus discovering a new world; it is ­Captain Kirk going boldly where no man has gone before. It is Abraham and Lehi and Joseph Smith forsaking all at the command of God to seek freedom and peace.

The journey is forward movement. It is pressing ahead and saying, “I shall not pass this way again.” It is “blazing trails along the way” as a matter of course and creating “stepping stones for generations” as your “deed of ev’ry day.” Brigham Young trekked across the plains, achieving greatness in the midst of sacrifice, leading a people to victory. Brigham may have crossed and recrossed the wide expanse, but his glory consisted in striking ahead unhesitatingly into the unknown. Brother Brigham, at least in my mind’s eye, spent his days conquering the wilderness and the vastness of the prairie. Brother Brigham did not commute.

As I creep along the freeway and anticipate the coming day, I see the long stream of taillights and headlights stretch out ahead of me like red and gold streamers on a cityscape Christmas tree, and I think of the metaphors used since time immemorial to describe movement: the road, the sea, the river. I think mostly of the river. With its constant progress, its flow, its power-in-action, it is the ideal stand-in for the journey. It’s hard to imagine Lehi naming a toll road or a subway line after his son to keep him “continually flowing” to God.

The beauty of the river as metaphor, I imagine, is its linearity. Every river begins someplace or other, and every river ends. As challenging as a river’s source may have been to locate for determined explorers, it always existed somewhere, in some mountain spring or in the confluence of a thousand minute creeks. And even the Amazon and the Mississippi and the Nile eventually discharge into the sea. The river is the very image of forward movement and onward travel, of beginning and end. There’s no going backward on a river for very long, and there’s no repetition as it presses ever onward.

Much of my life, though, is neither river nor any other kind of journey—just commute. And the commute is the opposite of linearity; it’s back and forth, covering the same ground over and over as I try to get things right. There is comfort in linearity and its promise of progress; finding it in the repetition and circularity of the commute can be more of a challenge.

I like to read a book in the same way I’d like to make a journey: straight through, from beginning to end. No bouncing around, back-and-forthing, or skipping straight to the end. I’ve heard of daring souls who approach books in such a manner, but the pull of linearity has always been too great for me to imitate them. Reading, after all, is always a kind of travel, and I want to be crossing the ocean to the promised land, not just plying the freeways.

I’ve always been fascinated by places that also impose linearity: places that, like books, more or less demand entrance and exit through two separate points. There’s something enticing about the idea of going in one way and perforce coming out another. The built-in idea of progress in these places is almost mystifying. A Mormon temple is the prototype of such a schema, as, in a more prosaic fashion, was the old BYU Testing Center: enter the Grant Building, ascend the grand staircase, pass through your frightful ordeal, and be unceremoniously disgorged via the back stairs and greeted by a screen informing you of your victory or defeat in the academic struggle (“92%—Great Job!”). Guided tours of just about any place are similar experiences: begin here, follow my lead, and we’ll end up someplace else. Discipleship, of course, is the ultimate don’t-walk-in-your-own-tracks journey. We may be treading, after all, “where the saints have trod,” but we’re doing it for ourselves, one hesitating step at a time.

In the end, of course, my commute always ends with arrival at work or at home. I emerge from my car as from a rocket or a submarine, a little dazed by the passage of time but reinvigorated by my new location and by having once again conquered time and space. There is a tiny moment of satisfaction when I step out of my Toyota time machine and move on to the next phase of the day.

And that moment makes me think there must be something of the journey in my commute after all. It’s a journey that I take over and over and in a thousand only slightly varying ways, but some kind of a journey nevertheless. It’s a journey, I suppose, in which I derive satisfaction not from the new but from reimagined and reconceived encounters with the familiar.

In the repetitive rhythms of the daily commute, then, there is hope after all, just a different hope than that of the linearity of other journeys. The uncertainty of circularity and recurrence proffers not the breaking of the cycle but the discovery of its secret inner perfections. For the adherents of some eastern religions, even time itself is not a linear progression from beginning to end, but a circular wheel in which all ends are beginnings and vice versa. I wonder what that idea means in practice, as people work and learn and love, as they study and reflect, even as they commute.

When I was younger, the journeys of life were sufficiently discreet, sufficiently defined, as to give the impression that things had clear beginnings and endings and that life would always provide signposted doors allowing passage from one phase to another. Graduation, a mission, even the ends of semesters were all fairly recognizable journeys resulting in anticipated ends.

In middle age, the journey is less clear because it looks so much more like a commute. Like Bill Murray’s character in Groundhog Day, I find myself passing through moments (even, in my case, through days, months, and years) that seem eerily familiar. They pile up, one on top of another. But if I make a conscientious effort, I can perceive in dim outline the resulting cumulative stack. It is a figure, vague and hazy but nonetheless real for its near indefinability, of hills or even mountains that I’m traversing, over which I’m journeying with progress that is barely perceptible in the moment but distinct in hindsight.

So perhaps my daily back-and-forthing, my there-and-backing, my daily grind, is a journey after all, just not the kind I’ve envisioned. A journey? Yes. With an end in sight? Yes. But clearly defined, easy-to-articulate movement from A to B? Not so much. Perhaps I’ve had my metaphors wrong. Perhaps I need less pioneer, less Frodo, less Huckleberry Finn, and more children of Israel, more Odysseus. Forty and twenty years, respectively, spent wandering in search of home can’t have felt very much like a straightforward trip at the time, but these wanderers set the standard for pressing forward to the goal.

And I guess that’s what I’m seeking too, after all. I know where I want to be; I just struggle to remember that my wanderings (focused, but wanderings nevertheless) are getting me imperceptibly closer to that point. They’re tedious at times, but the tedium is interrupted at unexpected moments by shimmers of sublimity, when the ineffable shines through the sameness. The commute can be torturously back-and-forth, but I’m coming to see that the extraction of meaning from mundanity, of beauty from banality, and the thousand humdrum moments that make up a life, is a journey worth the effort. 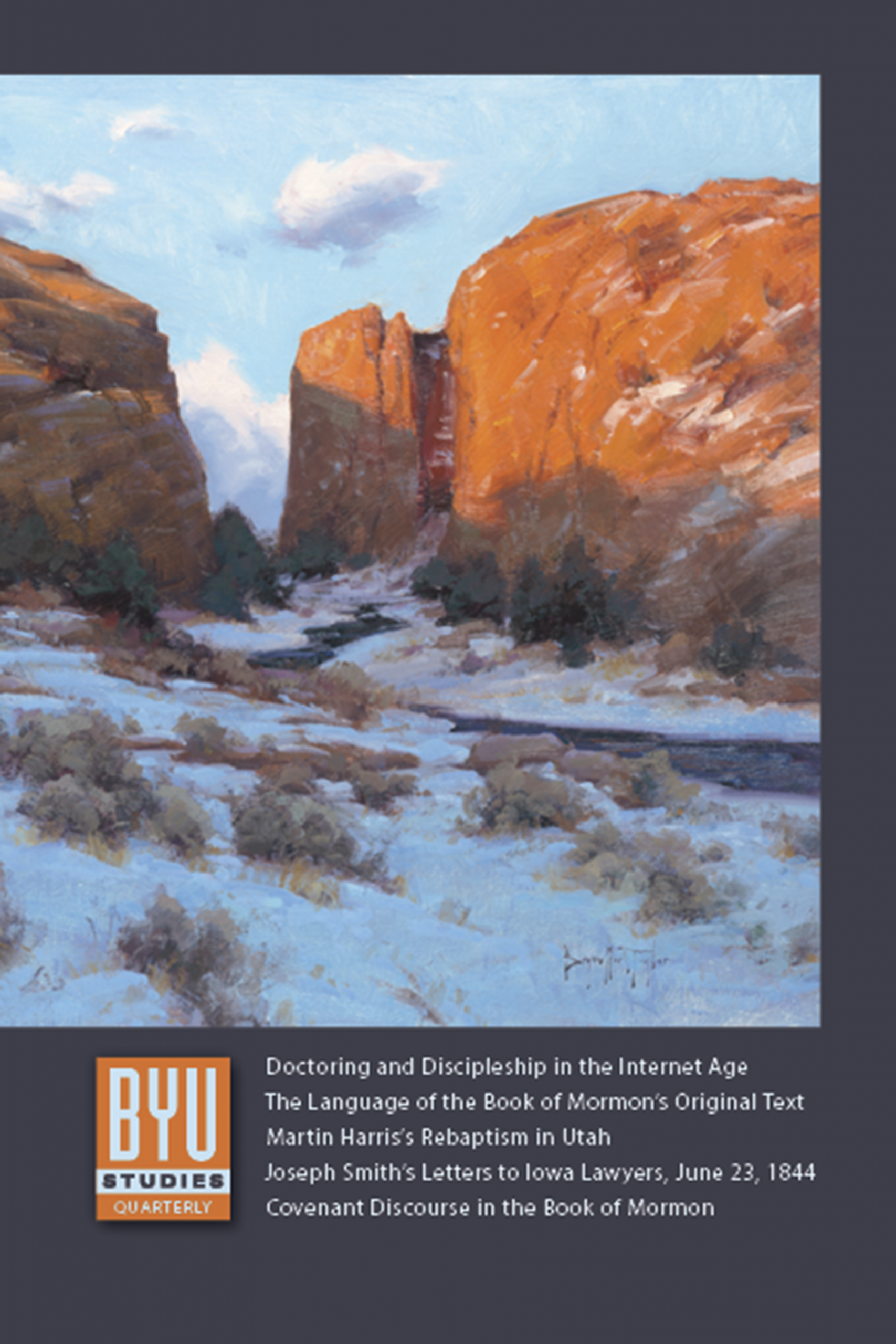 Previous:
Understanding the Abrahamic Covenant through the Book of Mormon