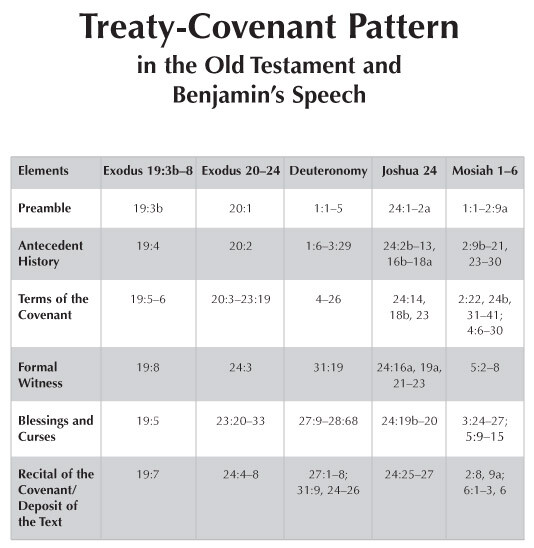 King Benjamin’s speech in Mosiah 2–5 had the desired effect: the people of Nephi were willing to make covenants with the Lord to keep his commandments (see Mosiah 5:5–6). In his discourse, Benjamin used the same pattern of covenant making that Moses and Joshua employed for the children of Israel, most likely during the Feast of Tabernacles. This chart highlights some of the similarities between Benjamin’s pattern and Old Testament covenant-making conventions. It is also interesting to note that Hittite treaties composed in the fourteenth and thirteenth centuries B.C. also exhibit the same six characteristics listed on this chart: the preamble, antecedent history, terms of the covenant, formal witness, blessings and curses, and recital of the covenant and deposit of the text. (In the chart the designations a and b in the scriptural references refer to the first half of a verse and to the second half, respectively.)