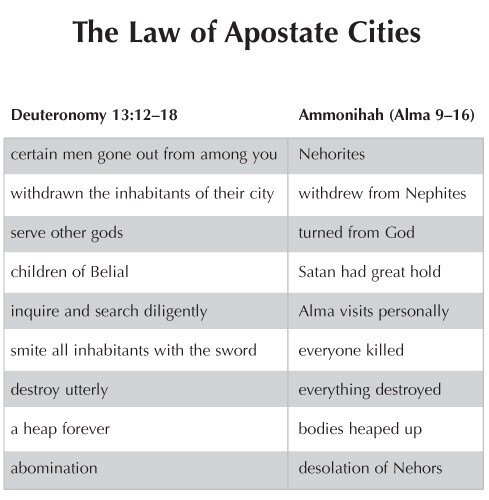 In Deuteronomy 13:12–18 the Lord commands the Israelites to destroy the truly apostate cities in the land. They were to decide whether a city was wicked according to certain conditions set forth in the Law. As this chart illustrates, these conditions are similar to the conditions of Ammonihah before the Lamanites destroyed it. After this city was annihilated, it remained uninhabited for many years but was eventually built up again. The law of Moses deemed that the ruins of a wicked city should never be built up; but this prohibition apparently could be revoked or could expire after a period of time, as evidenced in the Old Testament by the authorized rebuilding of several cities. Ammonihah similarly remained uninhabited for just over seven years, a ritual cleansing period, and was then built up again. This and other evidences support the assertions that Alma, as bearer of the brass plates, knew that Ammonihah was an apostate city according to the law of Moses, and that Alma reported the destruction of that city in such a way as to show that all the legal requirements and procedures regarding the destruction of an apostate city had been satisfied.