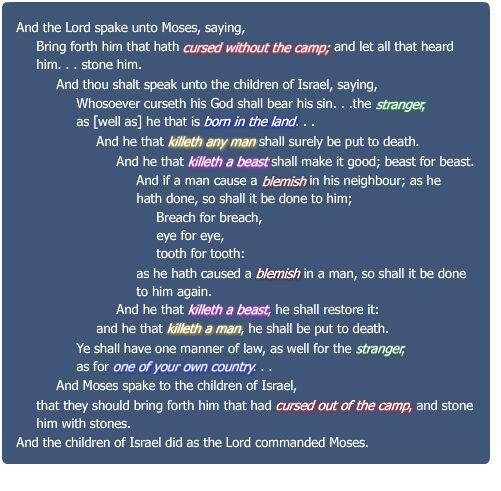 Chiasmus is a style of writing known in antiquity and used by many ancient and some modern writers. It consists of arranging a series of words or ideas in one order, and then repeating it in reverse order. In the hands of a skillful writer, this literary form can serve several purposes. The repeating of key words in the two halves underlines the importance of the concepts they present. Furthermore, the main idea of the passage is emphasized by its placement at the turning point where the second half begins. Thus chiasms, in general, place their most important elements in the center. Chiasmus can be found in biblical texts, as Leviticus 24:13–23 demonstrates. It is one of the clearest examples of chiasmus in the Bible. In this case “breach for breach, eye for eye, tooth for tooth” is the central formulation. Other words important to the structure of the chiasm are italicized.