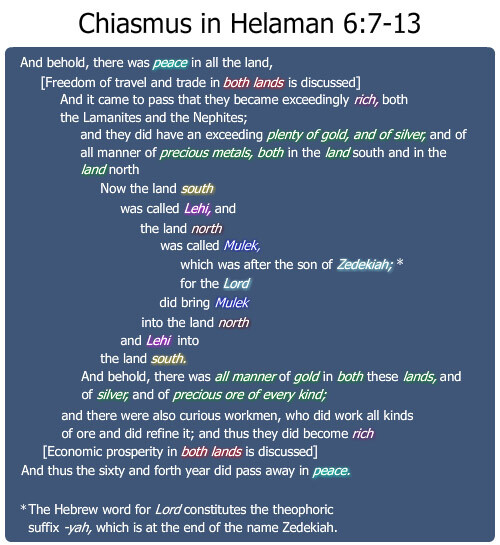 Yet another example of chiasmus, in this case a report of the events in a particular Nephite year, is found in Helaman 6:7–13. Because the report is a fine literary unit, the account was most likely originally written as a single entry in the Nephite annals that Mormon copied verbatim into his record from the large plates of Nephi. The sixty-fourth year of the reign of the judges was an unusual year, one in which the Nephites and Lamanites cooperatively enjoyed economic prosperity, peace, and free trade—an unprecedented occurrence. The chiastic form of the report for this year underscores its importance. In the chart, notice that Zedekiah and Lord are paired together at the center of the chiasm. The -yah at the end of Zedekiah represents the Hebrew word for “Lord”; thus the chiasm was probably even more evident in its original language than it is today in English.