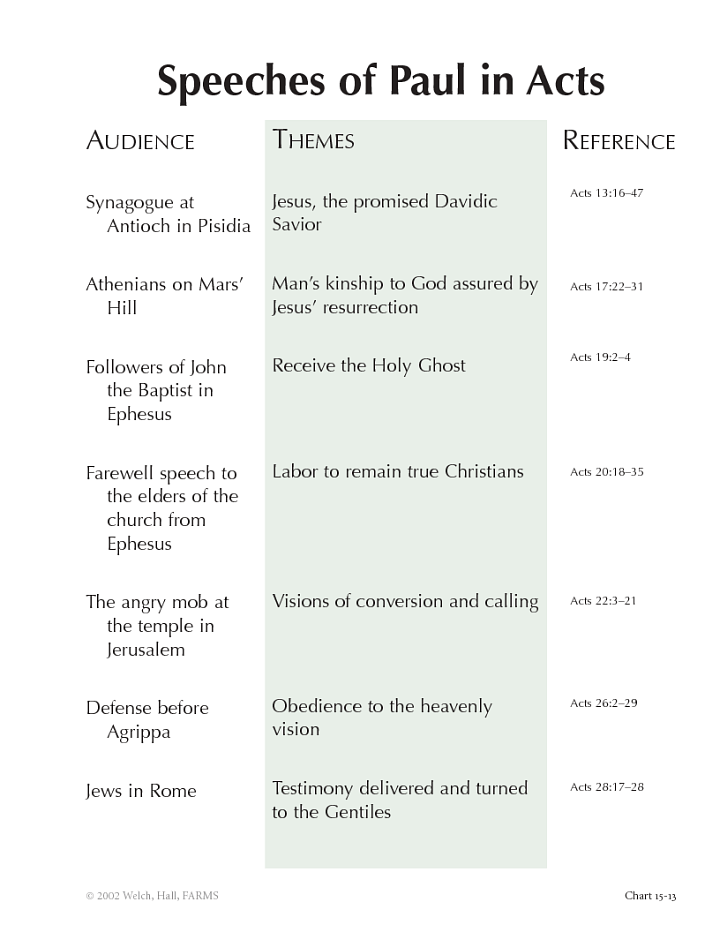 As with Peter (see chart 13-6), the book of Acts contains seven speeches of the apostle Paul. In 122 verses, Paul addresses Jews in Antioch, Jerusalem, and Rome; ruling Greeks in Athens; King Agrippa in Caesarea; and converts of the John the Baptist and the elders of the church in Ephesus. Paul spoke to Jews and Gentiles passionately and articulately. His major themes covered Jesus as the promised Savior and man’s kinship to God assured by Christ’s resurrection; receiving the Holy Ghost and laboring to remain true Christians; and conversion, calling, obedience, and testimony.

Many readers of the New Testament come away with the impression that Paul was a misogynist who did not value and esteem women. This false reaction is due in part to the King James English, which generally renders the Greek in a manner that is less flattering toward women than may be necessary. Other nuances in meaning are possible and bear reflection, even if it remains uncertain what Paul originally intended. When Paul’s statements about women are read all together, especially in conjunction with similar statements by Peter, a more positive New Testament posture toward women emerges. As chart 15-14 shows, women are encouraged and welcomed as united companions working in building the kingdom of God; women are charged to train their sisters in virtue and righteousness; dress styles are to be modest and in good taste; and women are to learn in serenity and peace of soul. In reality, both men and women are given similar instructions: to be wise, reverent, orderly, and obedient.