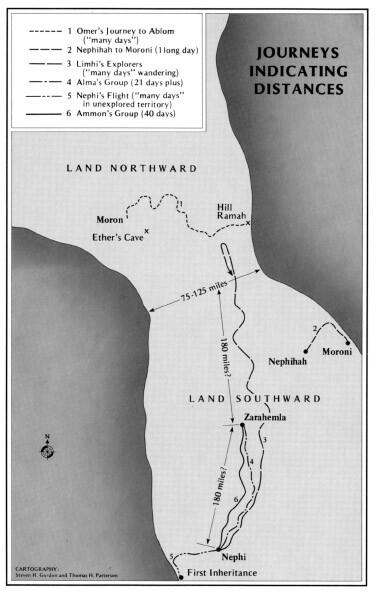 Many accounts of journeys are found in the Book of Mormon, and approximate distances can be determined from the details in those accounts. For example, Alma’s group traveled approximately twenty-one days from the Waters of Mormon (near the city of Nephi) to Zarahemla (see Mosiah 23:3; 24:25). Since the group consisted of men, women, children, and flocks, the journey was probably a relatively slow one. Basing his calculations on the rates of travel for Mormon pioneers and Guatemalan pig herders, John L. Sorenson concludes that Alma’s group most likely traveled about eleven miles a day. If we take into account the twists and turns of the wilderness through which they traveled, the journey was probably around 250 miles (180 miles if they traveled in a straight line, as shown on the map). The distances for the other five journeys listed on this map were determined in a similar fashion, although considerable time must be allowed in Ammon’s case for the group’s losing its way in the wilderness (see Mosiah 7:4).