155 – From Nephi to Zarahemla: Alma’s Escape 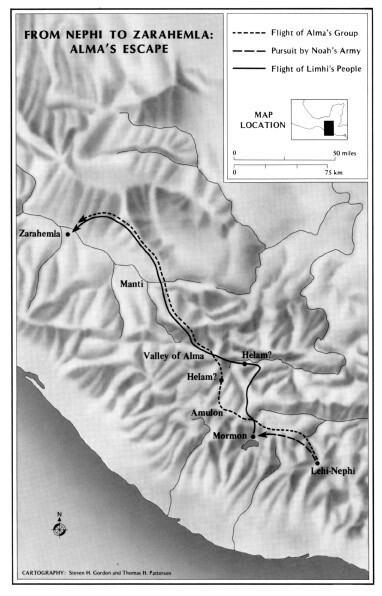 The flight of Alma and his people, the pursuit of Noah’s army, and the flight of Limhi’s people are illustrated on this map, which shows a possible location of Helam in relation to the other places mentioned in the Book of Mormon. When Alma was expelled from the court of Noah for pleading with the king to let Abinadi go unpunished (see Mosiah 17:2–3), Alma and his followers went to the Waters of Mormon (see Mosiah 18:7–8). From there they traveled eight days to a place of “pure water” that they named the land of Helam (Mosiah 23:3–4, 19), eventually escaping to Zarahemla through an area they called the valley of Alma (see Mosiah 24:20, 25). Limhi’s party apparently went in the same general direction, from the land of Nephi, bending their course, perhaps through the region near the land of Helam, toward Zarahemla (see Mosiah 22:11).