157 – Alma’s Journeys in the Land of Zarahemla 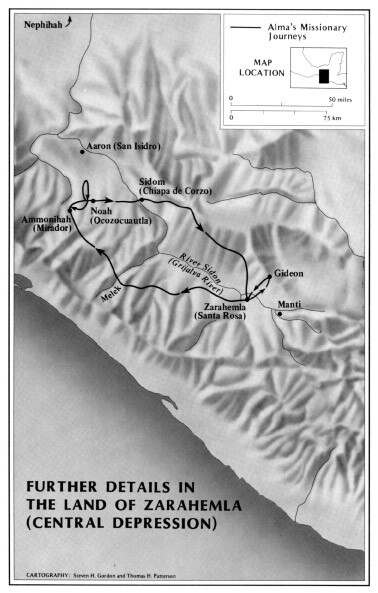 This map charts out a possible understanding of the travels of Alma the Younger reported in Alma 5–16. He began in Zarahemla by calling the people to repentance in a powerful speech (see Alma 5). The capital city of Zarahemla was located on the river Sidon in the center of the land of Zarahemla. Alma traveled eastward to the city of Gideon (see Alma 6:7), where he preached about the atonement of the coming Christ (see Alma 7). He next had success in the land of Melek, “on the west of the river Sidon, on the west by the borders of the wilderness” (see Alma 8:3), and then traveled three days north to the city of Ammonihah (see Alma 8:6). Rejected, he left Ammonihah but was told to return to that city. There he converted Amulek and his household, preached a major sermon on the holy order of God (see Alma 12–13), yet continued to meet with considerable resistance and imprisonment by the wicked. He and Amulek were eventually delivered from prison, and Ammonihah was destroyed. The city of Noah, not far from Ammonihah (see Alma 49:14–15), may have been on the way to Sidom, where Alma baptized Zeezrom and many others (see Alma 15:1), before returning to Zarahemla. This map superimposes the travels of Alma on an area in southern Mexico. John Sorenson has proposed geographical locations from Nephite times that may correlate with Alma’s journeys. The main purpose of this map, however, is to give only a general idea of the directions and stops in some of Alma’s journeys.