160 – Plausible Locations in Mesoamerica for Book of Mormon Places 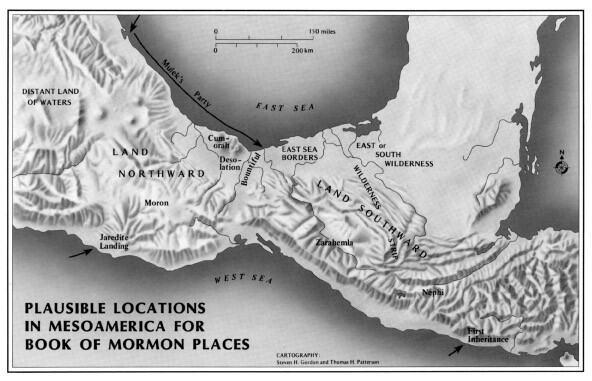 Many accounts of significant lands and cities are given in the Book of Mormon. The main passage mentions the land of Nephi bordering on the seas, “a narrow strip of wilderness,” the land of Zarahemla, and the headwaters of the river Sidon (see Alma 22:27). The land of first inheritance to the west (see Alma 22:28), the land Bountiful to the north, and the land Desolation farther north (see Alma 22:29) are also mentioned. The “land northward” and the “land southward” were divided from each other by a narrow neck of land, whose width was “a day and a half ‘s journey for a Nephite” (see Alma 22:32). Mulek’s party first arrived in the land north (see Helaman 6:10) and then moved south into the land of Zarahemla (see Omni 1:16). This map plausibly positions these and other Book of Mormon locations in the general Mesoamerican arena.