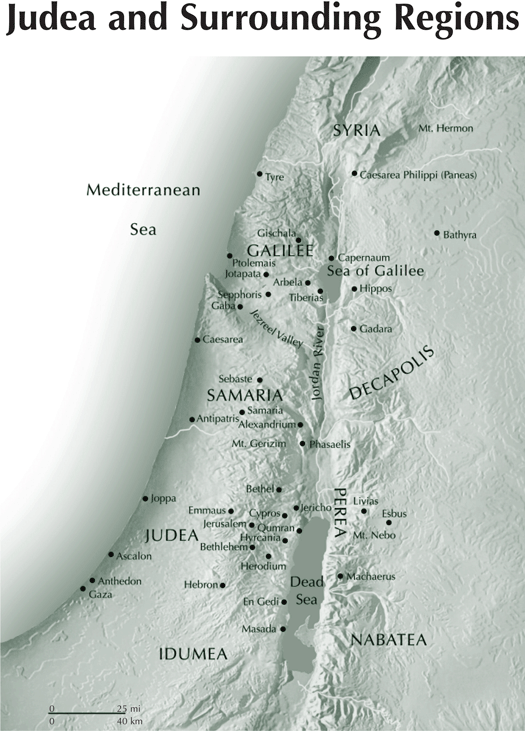 Understanding the New Testament requires some understanding of the land where its events transpired. Indeed, the Holy Land has been called by some people another “book” of the Bible. Walking where Mary and Joseph walked, standing where John the Baptist stood, sailing where Peter fished, kneeling where Jesus knelt, and running where John ran adds palpable dimensions of feeling and perspective to the pages of the New Testament.

Chart 2-11 shows the regions around Judea in the first century: Idumea (Herod’s homeland) to the south, and moving north through Judea (the Jewish heartland), Samaria (hill country up to the Jezreel Valley), Galilee (an area of Jewish population expansion in the first century B.C.), and on up into Syria. To the east is the Decapolis (ten Hellenistic cities mentioned in the New Testament but apparently not visited by Jesus). This map shows locations of cities, towns, Herodian fortresses, and physical features, many of which are mentioned in the New Testament. From Nazareth to Jerusalem is only 75 miles as the crow flies.

Chart 2-12 focuses on the even smaller region of Galilee. Only 30 miles east of the Mediterranean Sea lies the beautiful Sea of Galilee. Six miles wide and 12 miles long, it feeds the Jordan River, is full of fish, and sits as a jewel amidst the surrounding hills and valleys. One can easily imagine how Jesus and his early Galilean followers loved to be together in this somewhat remote but close-knit and enveloping neighborhood.