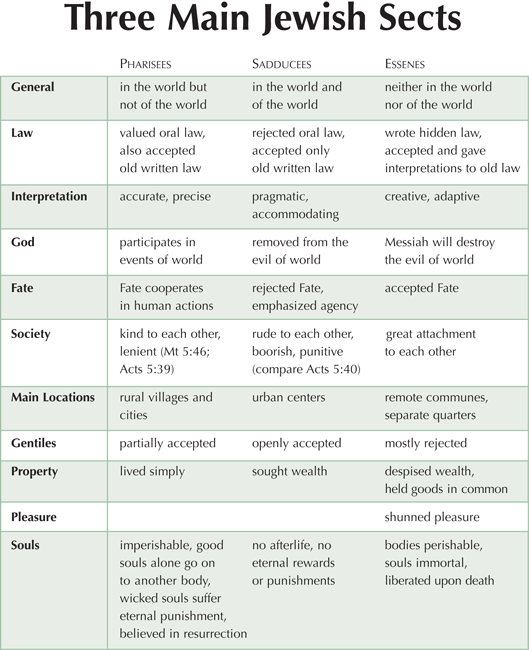 The New Testament mentions several Jewish social institutions that can be quite confusing. The charts in this section provide basic information about the main groups with which Jesus interacted or may have had contact. Beyond the aristocratic Herodians, three main Jewish sects were religiously active during the time of Jesus: Pharisees, Sadducees, and Essenes. In addition, many Jews would have been unaffiliated with any of these particular movements.

Pharisaic (separatist) Judaism is known through later rabbinic writings. Jesus clashed with the Pharisees partly because he encountered them often in the outlying villages and also because he shared many of their underlying religious concerns. Friction is often the greatest between groups that are actually the closest to each other.

The Sadducees were largely hellenized Jews who controlled the temple and Sanhedrin in Jerusalem and cooperated with the Romans.

The Essenes, who awaited the impending arrival of the apocalyptic end of the world, occupied one neighborhood in Jerusalem and may have drawn adherents from all around Judea. They were centered at Qumran where they copied biblical scrolls and produced sectarian documents found among the Dead Sea Scrolls. They are never mentioned directly in the New Testament. This chart compares these three main sects on a few of their most salient points of doctrine and practice.