4-9 Rulers and Administrators of Galilee 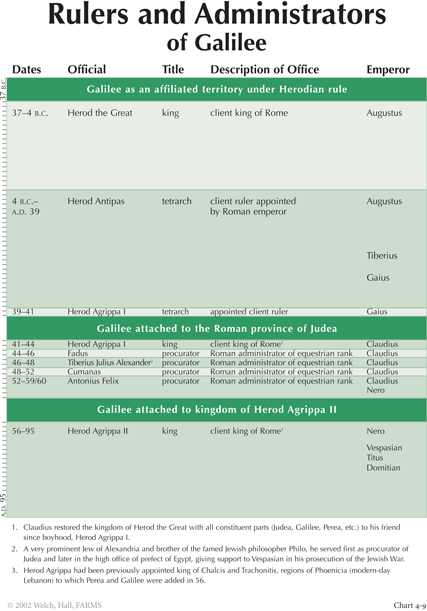 In consolidating his power as ruler of Judea, Herod the Great received support from Rome, and in return he became a loyal client of Rome’s emperor, Augustus Caesar. Thus, Herod was popular and powerful in certain secular Jewish groups but not in all Jewish circles. After Herod’s relatively long reign, his son Archelaus ruled in Judea so poorly in his father’s stead that the Sanhedrin and other local Jewish leaders even requested that a Roman administrator be sent to replace Archelaus. Except for a few years when Herod’s kingdom was restored under Herod Agrippa (Herod the Great’s grandson), Roman governors of minor rank presided over Judea. A single cohort of six hundred men was their only military complement, so Roman domination was not imposed by force. In fact, the Sanhedrin and other Jewish leaders continued to govern the local population. In Galilee, Herod’s heirs ruled uninterrupted for a longer period than in Judea but were ultimately supplanted by minor Roman officials. A chronological list of those who ruled over Judea and Galilee is provided in the following two charts.