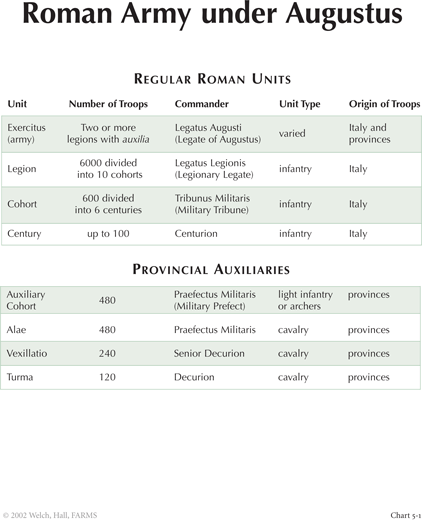 At the time of Augustus Caesar, the Roman military was comprised of regular soldiers of Roman or Italian origin organized into legions and stationed through the provinces of the empire as single legions or combined with other legions into an army (exercitus).
Other troops were raised in the provinces and organized utilizing a different structure. They were called “auxiliaries” and served largely to keep order in the provinces by filling police functions or manning guard posts. The legionary units conducted required military operations, although on occasion they were assisted by auxiliary troops, particularly by cavalry units that performed reconnaissance and guarded the flanks of the battle line.
Chart 5-1 shows the organization of both classes of troops, their provenance, function, and command structure around the time when Jesus was born.