89 – Benjamin’s Themes Related to the Day of Atonement 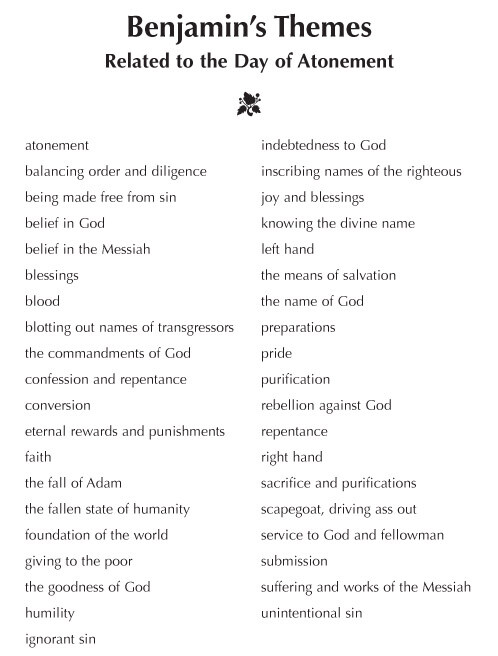 The Day of Atonement is one of the most sacred holidays in Jewish culture. In preexilic Israel it included ritual atonement in the temple and a series of holy assemblies. Because Benjamin’s speech in Mosiah 2–5 and its surrounding context emphasizes several topics particularly significant to this day of religious celebration, it is possible that Benjamin gave the speech on or near the Day of Atonement. In fact, he refers to the atonement overtly seven times—a number that represented spiritual perfection and that was used in connection with rituals performed on the Day of Atonement and during other times of purification mentioned in the book of Leviticus. This holy day was also a time of forgiveness for the people of Israel who confessed their sins and repented; similarly, the people of Benjamin were spiritually reborn after they confessed and repented of their sins. Each element in this chart, listed alphabetically, is found both in Israelite texts and in Benjamin’s speech.