Although focusing on the introduction of plural marriage by Joseph Smith, Nauvoo Polygamy is also an analysis of the background of pre-Mormon polygamy, a consideration of the expansion of the institution, and the testimony of those who entered it.1 Significantly, it is the first attempt since Todd Compton’s In Sacred Loneliness2 to provide a critical list and analysis of the women whom Joseph married. It is not, however, an attempt to provide a statistical analysis of plural marriage, and its consideration of the operation of plural family life is much shorter than we find in the works of Kathryn Daynes and Jessie Embry.3 Rather, it essays more on the organizational aspects of the practice, the antecedent practices, and the opposition to the practice. It also focuses more on internal opposition rather than on outside political pressure, as found in Sarah Barringer Gordon’s The Mormon Question.4

The book has nine chapters, an introduction, two appendices, and a bibliography. The paperback edition has an additional preface, and the author5 has corrected dates and a number of other items in the second appendix in which he tried to make a comprehensive list of Nauvoo polygamous families with tabular data on each of them. An additional table added to chapter 3 of the paperback edition lists the seeming relationship between Emma Hale Smith’s pregnancies and Joseph Smith’s courting of other women.

Chapter 1 considers the anticipation of the principle of plural marriage as an aspect of the restoration of all things. It points out that Joseph had met many of the women to whom he was later sealed during the sojourn of the Church in various places in the Midwest and Upper South before the Saints settled in Nauvoo. Although the chapter deals with controversial aspects of Joseph’s early career and of plural marriage, it lays out Joseph’s understanding of the reception of plural marriage by faithful Latter-day Saints by quoting from George Bernard Shaw that plural marriage in Nauvoo had nothing to do “with personal licentiousness” (50). George Smith corroborates Shaw’s assessment as correct. On the other hand, he acknowledges what we have known for a long time: some close to Joseph perceived abuses in plural marriage that “motivated a significant dissident faction to oppose him” (50). The author also attributes much of the opposition from outsiders in Western Illinois to the practice of polygamy. He may be right, but he has not convinced this reviewer that polygamy was as important in generating opposition from non-Mormons as political and economic conflicts were.

Chapters 2 and 3 document the sealings of Joseph to women other than Emma. These two chapters are at the heart of the book, but not, in my view, the most important portions. George Smith is ambiguous about whether Joseph married Fanny Alger, which other historians have argued. Rather, he lists the marriage to Louisa Beaman on April 5, 1841, as the first plural marriage and the marriage to Fanny Young Carr Murray on November 2, 1843, as the thirty-eighth and last.

The author may be wrong about some of these marriages. If so, however, his failing is not for lack of effort. His sources are voluminous. They include information collected in the nineteenth century by future Church President Joseph F. Smith, interviews by Assistant Church Historian Andrew Jenson, diaries and autobiographies of the women involved, public records such as the Independence Temple Lot trial, and the research of other historians such as D. Michael Quinn and Todd Compton.

I have reservations about the use of John C. Bennett’s letters to the Sangamo Journal, later published as The History of the Saints, as evidence. Bennett concocted a fantasy seraglio with courses of wives apportioned from bottom to top as Cyprian Saints, Chambered Sisters of Charity, Cloistered Saints, and Consecrates of the Cloister.6 We have no evidence that such a system ever existed, and George Smith does not argue that Bennett’s fantasy was accurate. Bennett argues that the Nauvoo Relief Society was a central agent of plural marriage, but we know from better sources that, although a number of the women in the Relief Society were plural wives, the principle did not flourish there because Emma Smith was its president, and she held at times ambivalent and frequently negative feelings about plural marriage.

Knowledge of Bennett’s fabrications generate in my mind the question that if Bennett could concoct such nonsense, what other parts of his discussion of plural marriage did he also fabricate? However, we know that some of what he claimed was true, for we have additional evidence for many of the plural marriages that Bennett lists. These sources include statements by the participants and their confidants, Andrew Jenson interviews, public documents, and diaries and information recorded by other Church leaders.

Chapters 4 and 5 document the expansion of plural marriage to members of the Quorum of the Twelve Apostles and Joseph’s other close associates. These chapters are summarized in appendix B. In general, however, it is clear that, contrary to what many would have supposed, men, including Joseph himself, were reluctant to accept the revelation as part of the restoration of all things. Brigham Young said that when he attended a funeral, he envied the corpse, because he would almost rather die than accept the revelation. He finally did so because of his faith in the Prophet Joseph and because of a confirmation from the Spirit that it was of God. Along these lines, Chapter 6, in my view, is the most important in the book. This chapter contains the testimonies of those who accepted plural marriage, however reluctantly, and those who found it too much to bear. It also includes a discussion of the ways in which families worked out their relationships in plural marriage.

Chapters 7 and 8 explain the efforts to suppress information about plural marriage and its subsequent recovery by historians, family members, and others. The author is somewhat critical of this practice, but to many it is nevertheless understandable. Given the problems plural marriage caused the early Church and continues to cause the broader Mormon community today, it is not at all surprising that Church leadership should want to minimize the extent of knowledge about its practice. Leaders have also increased efforts in recent decades to differentiate The Church of Jesus Christ of Latter-day Saints from fundamentalists who continue the practice and have sometimes been an embarrassment to mainstream Latter-day Saints. Numerous people throughout the world continue to associate contemporary Mormonism with plural marriage because they either do not know the difference or perversely refuse to differentiate between fundamentalist Mormons and faithful members of The Church of Jesus Christ of Latter-day Saints.

Chapter 9 provides an overview of some antecedents of polygamy in Western culture. George Smith mentions but does not dwell on the Oneida community or the Shakers; these are well known to serious readers of Mormon history, especially because of the excellent work of Larry Foster. The author touches upon Henry VIII and his marriages as well. His most significant treatment is the discussion of polygamy during the Radical Reformation that began in sixteenth-century Germany and Switzerland. I had known of the practice of polygamy in Germany, in part, because I served two missions there. In the last mission, my wife and I served in the outreach initiative at the LDS Institute in Berlin. Just before we returned home, we went with a group of students and youth leaders to Wittenberg, where we held a conference on the theme “Reformation and Restoration.” It was in Wittenberg that Martin Luther posted his 95 theses in 1517. Unless memory fails, nothing was said at our conference about the Radical Reformation. Likewise, many who read this book might not otherwise have been aware of the Münster Anabaptists (Wiedertäufer), the practice of polygamy there, and the violence that it provoked. It is important to understand that at crucial times in the world’s history, religious leaders have struggled with problems related to marital relationships. The Reformation of the early sixteenth century was such a time, as was the Second Great Awakening in early nineteenth-century America.

Every book has problems, including those books I have written. In the present case, it is certainly controversial if not outright false that the assassination of Parley P. Pratt was “the proximate cause of the Mountain Meadows Massacre” (333). The author apparently borrows this argument from Will Bagley’s Blood of the Prophets.7 More recent work by Ronald Walker, Richard Turley Jr., and Glen Leonard demonstrates that this perception is inaccurate. Mormon militiamen generally from Cedar City carried out the massacre because of local conflicts with the Baker-Fancher party.8

In addition, George Smith’s brief discussion of the relationship between polygamy and slavery in Utah is certainly overdrawn. The 1850 census found fifty African Americans in Utah, of whom twenty-six were slaves, rather than the one hundred slaves that the author alleges to have been there (297).9 Historians have long known that, if anything, the 1850 census overstated Utah’s population by counting people who were not actually in the territory at the time, most probably because Utahns hoped to achieve statehood. The 1860 census shows little increase, with fifty-nine African Americans. Moreover, in his famous interview with Horace Greeley, Brigham Young said that if Utah were to enter the union it would come in as a free state. In 1862, Congress outlawed slavery in the territories, so it did not exist in Utah after that time, though racism certainly did.

The author is a bit vague about what he means, but he seems to believe that the 1842 story of the First Vision was the first time Joseph Smith mentioned the Godhead (21). In the 1832 version, however, Joseph wrote of the Spirit of God, the Lord, and the Lord that calls him a son: “A piller of fire light above the brightness of the sun at noon day come down from above and rested upon me and I was filled with the spirit of god and the <Lord> opened the heavens upon me and I saw the Lord and he spake unto me saying Joseph <my son> thy sins are forgiven thee.”10

Problems notwithstanding, George Smith’s Nauvoo Polygamy is an excellent book. He undertakes the unenviable task of fleshing out the details of an institution that played a central role in Mormon society and culture during the nineteenth century. As with many Latter-day Saints in the Intermountain West, I had polygamists on both sides of my family. At least one great-great-grandfather served a term in the territorial penitentiary for unlawful cohabitation. I am certain that they practiced plural marriage because they believed, as those who tell their stories in Chapter 6 did, that it had come as a commandment from God. Personally, I thank God, however, that he inspired his prophet to end the practice before I was born. I wonder if I would have had the faith to enter under any circumstance. 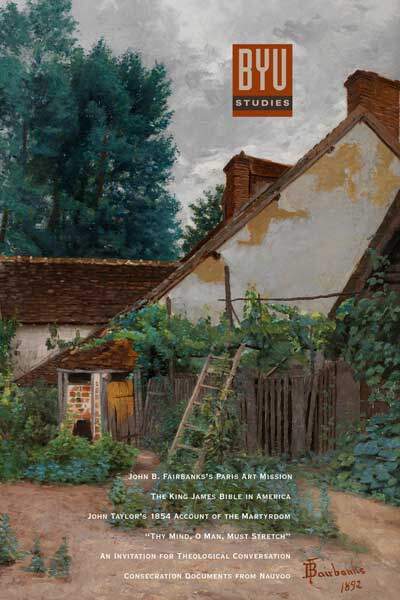 BYU Studies Quarterly 50:3
Next:
Mormons as Citizens of a Communist State

Thomas G. Alexander received his PhD in American history from the University of California–Berkeley and is the Lemuel Hardison Redd Jr. Professor Emeritus of Western American History at Brigham Young University.

5. Since both the author and the principal subject of the book have the same last name of Smith, I have chosen to refer to the author either as “the author,” or “George Smith,” and Joseph Smith as “Joseph,” a common convention in The Church of Jesus Christ of Latter-day Saints.

7. Will Bagley, Blood of the Prophets: Brigham Young and the Massacre at Mountain Meadows (Norman: University of Oklahoma Press, 2002).