The Work of Their Hands

When I turned eighteen, I took a job as a laborer for a construction company that was building dormitories on a university campus in High Point, North Carolina. It was a new world for me, one of mud, concrete, and rebar. The Lulls, excavators, and flatbeds crawled around the job site, engines roaring, back-up beepers blaring. Meanwhile, the chop saws competed with the quickie saws to see which could scream the loudest as they sliced through wood, metal, and concrete. I soon came to know the tingling in the fingers after using a Sawzall and the smell of hot metal after using a grinder. I became more than familiar with brooms and shovels and with the aches that come from lifting and carrying for hours on end. Blowing my nose yielded black and brown contents, and the Port-a-John disposal tanker was always a welcome site. Perhaps the most defining trait of this new world was the workers: the hardy, dexterous, Spanish-speaking workers.

On my first day, I watched a concrete crew tie rebar for one of the walls. Lined shoulder to shoulder, with spring-loaded pliers in both hands, they reached for the spool of wire on their tool belts, then tied the wire around the intersection of vertical and horizontal rebar in a way that reminded me of tying a shoe. The pliers in their hands were a blur. Once the joint was tied, they cut the end of the wire that ran back to the spool, followed by the slack in the two loose ends of the wire knot. Snip, snip, snip. On to the next joint. They talked in rapid Spanish as they worked. For the top sections of the wall, they used scaffolding. When they finished, a 3-D lattice of rebar would be ready for forms to be put up around it and concrete to be poured. In time, the wall would help support a brand new, four-story dorm. Some of the workers wore bandanas under their hard hats that draped down and covered the backs of their necks. They seemed perfectly at home working in the sun.

The Latino crews were a jovial bunch. Some sang; many joked. They were always kind to me. Even with a language barrier, those with whom I worked would loan me tools and offer me taquitos, Gansitos,1 and cans of Coke. I wondered sometimes how men could be so cheerful when they worked for relatively low wages with limited opportunity for advancement and when they worked through agencies that not only subtracted taxes from their checks but also a percentage for themselves. Yet there the men were, working and laughing and working some more. If every workplace in the country had employees like my construction coworkers, US GDP would probably double.

Occasionally, safety inspectors sporting sunglasses and glossy new hard hats would visit the job site. Word of their presence would spread, and everyone would observe the letter of the OSHA law for an hour or so. Nobody wanted a fine. Yet it occurred to me a few years later that most of these workers had no health insurance, nor did they have any alternative work options if they were injured. I’m sure this reality kept them safer than any rule Uncle Sam could come up with.

I soon left for college in Utah, where I decided to study history, but the following summer found me back on the same job site in High Point, North Carolina. Work now was on the inside of the building, and the company was racing to finish the dormitories before the coming fall, when the first students would move in. All the Latino crews—duct workers, drywallers, painters, and others—were equal to the task. The dorms were finished. The students moved in, and the workers moved on to other jobs. I left for a Spanish-speaking mission to East Los Angeles, California, not to return to construction for several years. When I did, however, I ended up at the same university in High Point. This time, the construction company was building apartment complexes, and again, I worked among the Latinos. Now, though, I could understand them, and I appreciated their work ethic and good cheer all the more. Amusingly, I also realized that many of their words did not exactly come from the dictionary of the Real Academia Española, but rather were part of a linguistic twilight zone that included verbs such as framear, chirroquear, finishiar, paypear, and chalklaynear.2

Around this time, I graduated with a history degree. My studies culminated with a research project on agricultural labor in California. In a variety of books, I had seen pictures of Latino field workers beneath the California sun, immigrants who, under other circumstances, could very well have been my construction workmates—Virgilio, Erasmo, or Faustino. Over the last century, such workers became the backbone of California’s immense agricultural industry. They picked peas and peaches, topped sugar beets, thinned lettuce, planted onions, capped cantaloupe and watermelon, cut broccoli, threshed beans, cut and pitted apricots, and worked as seasonal laborers in a number of other crops. The lush fields and orchards were the work of their hands. Such work required incredible stamina. It was physically taxing and usually involved moving from town to town, living in camps, and making only enough to survive.

I studied one part of farm-labor history in particular: a tool known as the short-handled hoe. During the mid-twentieth century, many California growers began requiring their field workers to use hoes with eight-to-eighteen-inch handles to thin and weed row crops. The growers said it was necessary for precision. The tool required workers to bend at almost a ninety-degree angle as they worked. Such stoop labor, over time, led to arthritis, torn or over-stretched ligaments, ruptured discs, and, in short, forty-year-old workers who had eighty-year-old backs.

Research had taken me to Salinas, California, and to the office of a small legal firm called the California Rural Legal Assistance. In the early 1970s, this firm, on behalf of field workers, petitioned the California Industrial Safety Board to outlaw the short hoe from the fields. As I studied its records, I saw the debate that had ensued over the importance of workers’ health versus the financial considerations of California agribusiness. Convincing a state government that had long favored agribusiness of the need to reduce stoop labor took several years, but eventually, in 1975, the workers succeeded in banning the short hoe.

As fate would have it, I was accepted into a graduate program in Monterey, California, a town adjacent to Salinas. In fact, during my first year of the program, I drove to Salinas twice a week for a part-time job. As I drove those seventeen miles, I would look out over the long fields and watch the crews work. Many wore sweatshirts with their hoods fastened tightly, even in the heat. Happily, they were not using the short hoe. Furthermore, a trailer with Port-a-Johns and a water tank was kept close to the crew, a service not usually provided prior to the 1970s. Despite these improvements, the field work still obviously required working in the sun with a lot of repetitive stooping and lifting. But, as in construction, the Latino crews seemed equal to the task, and the crops flourished as a result.

Over the last few years, I have reflected on the importance of work and on the role of Latino workers in the United States. “Who can find a virtuous woman?” wrote the author of Proverbs—and I would add “virtuous man”—for “[their] price is far above rubies.” These virtuous individuals are they that “[work] willingly with [their] hands” (Prov. 31:10, 12).

Elder Maxwell often taught that even if work, including manual work, were not an economic necessity, it would be a spiritual necessity.3 It humbles us and prepares us to receive spiritual things. Similarly, some of my own family members have always said that a man can get nearer to God on the end of a shovel than on the front pew of a chapel. Before his ministry began, Jesus was a carpenter. Peter was a fisherman; Joseph Smith, a farmer; President Monson, a printer. If work is so important, perhaps those that work the hardest are most worthy of emulation. Indeed, when figuring their worth, the Lord spoke of rubies, not hourly wages. Yet, all too often, society’s attitude toward agricultural or construction workers, or toward the work itself, more closely matches that of a few of my fellow white laborers in construction who, though they did not work half as hard as the Latinos, liked to linger in the Port-a-Johns, writing racial slurs on the walls in permanent marker.

Through Isaiah the prophet, the Lord shared many things about the members of the house of Israel in the Millennium. Among them, he taught: “And they shall build houses, and inhabit them; and they shall plant vineyards, and eat the fruit of them. They shall not build, and another inhabit; they shall not plant, and another eat: for . . . mine elect shall long enjoy the work of their hands” (Isa. 65:21–22). Latinos in the United States and Latin Americans abroad have European and indigenous origins.4 The indigenous side can be traced back, in part, to the Lamanites, the children of Lehi, a descendent of Israel. Who, then, really are the workers in the fields and on the job sites? As much as anyone, they are “the seed of the blessed of the Lord, and their offspring with them” (Isa. 65:23). Perhaps one day, instead of the fully furnished, private-room apartments for privileged university students, they will build comfortable homes for themselves and their families. Perhaps instead of harvesting the fields and watching the truckloads of California produce be shipped away, they will have their own lands and farm their own food.

I do not know how Isaiah’s prophecy will be fulfilled, yet I am grateful for the Latino population that has been grafted into the US society and economy. Perhaps this grafting has even preserved them, like the grafted branches in Zenos’s allegory (see Jacob 5: 6–8). Moreover, I hope I may follow their example of work and thereby prepare for the day when “the wolf and lamb shall feed together” and when we as one people “shall not hurt nor destroy [nor denigrate] in all my holy mountain, saith the Lord” (Isa. 65:25).

1. Gansito is a Mexican brand of individually wrapped processed pastries, comparable to Twinkies.

2. These verbs come directly from English (respectively, to frame, to sheetrock, to finish, to install pipes, and to mark with a chalk line), and they have simply been adapted to Spanish grammar and phonetics. Border Spanish, or Spanglish, is common in construction, as in other settings in the United States.

4. In Brazil, the Caribbean, and other regions, many also have African heritage. 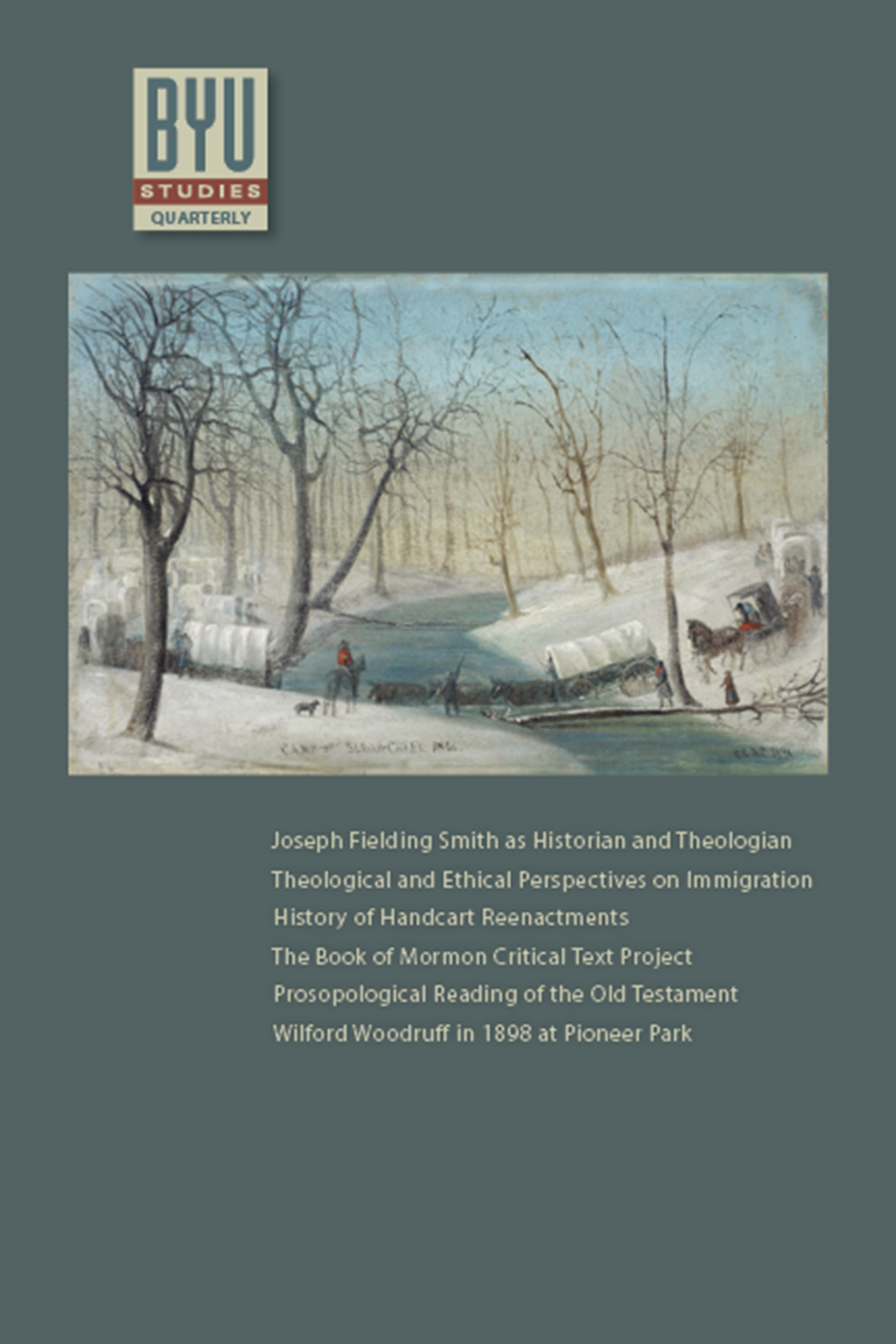