In a revelation that has served as an educational handbook for the Church, Joseph Smith aimed for all learners to “be instructed more perfectly in theory, in principle, in doctrine, in the law of the gospel, in all things that pertain unto the kingdom of God, that are expedient,” so that as they face the “perplexities of the nations,” they might “be prepared in all things” (D&C 88:78–80). In finalizing this issue of BYU Studies Quarterly, I am gratified to see how its helpful array of contents meets these aspirations of the Prophet.

In helping to keep readers up to date on important historical discoveries pertaining to the kingdom of God, this issue continues a long-standing role of BYU Studies. Here not only is a review by James Allen of three volumes in the Joseph Smith Papers series, but also an excerpt from the soon-to-be-released minutes of the influential Council of Fifty in Nauvoo. We are privileged to have lead-editor Ronald Esplin explain the significance of the Council of Fifty and of its minute book. The excerpt is from a Council of Fifty meeting held on April 11, 1844. On that day, ten weeks before he was killed, Joseph Smith began by offering very helpful advice: admonishing all to guard themselves against every spirit of bigotry and intolerance toward the religious sentiments of others, and calling upon government leaders to administer justice without any deprivations on account of a person’s religious opinions.

Next, examining numerous accounts of people who had heard, either first- or secondhand, Joseph Smith’s ideas about his Egyptian papyri, Kerry Muhlestein considers three models for dealing with Joseph’s impressive and yet puzzling explanations. In processing new and conflicting evidence, Muhlestein helps people steer a middle path between two ends of a spectrum: on the one hand, the idea that Joseph Smith was not inspired at all; and on the other hand, the idea that he was completely inspired in everything. Muhlestein’s middle path helps in carefully explaining much about the book of Abraham as well as about other topics of current interest to Latter-day Saints.

Larry Howell’s “Anatomy of Invention” helps readers appreciate three important principles of invention: inspiration, collaboration, and exploitation. In this Distinguished Faculty Lecture, Howell tells how his academic career has flourished by unexpectedly noticing new ways to apply old knowledge, by working together with colleagues from various disciplines, and by finding ways to make the most of opportunities to solve problems and improve people’s lives.

In the next article, David Paulsen, Roger Cook, and Brock Mason ask the question, Why did baptism for the dead fall out of use around the fifth century? As these three coauthors argue, the theological cause was the loss of three crucial doctrines: the necessity of baptism for the exaltation of all individuals; the efficacy of performing ordinances on behalf of others; and the belief that the gospel continues to be preached to the spirits of those who have died. Without these three theological legs, support for vicarious baptisms for the dead collapsed.

Then, John Hilton documents with personal interviews and contemporary correspondence the events that led up to breakthrough opportunity for the BYU Young Ambassadors to perform in mainland China in 1979, only six months after diplomatic relations were established between the United States and communist China. Personal sacrifices, faith-filled leadership, and loving performances made this trip unforgettable, opening doors for twenty-seven other tours to China by BYU performing groups.

Not to be missed is the moving speech by George Handley. It helps readers appreciate better how the trio of critical thinking, compassion, and charity can come together to produce both intellectual and spiritual growth. And the essay by Bentley Snow helps readers understand the good in other religions and in their faithful believers.

We all need help, and with the guidance of the Lord, ideas in this issue can help all readers to rejoice in goodness and righteousness. As Joseph prayed: “Help thy servants to say, with thy grace assisting them: Thy will be done, O Lord, and not ours” (D&C 109:43–44). 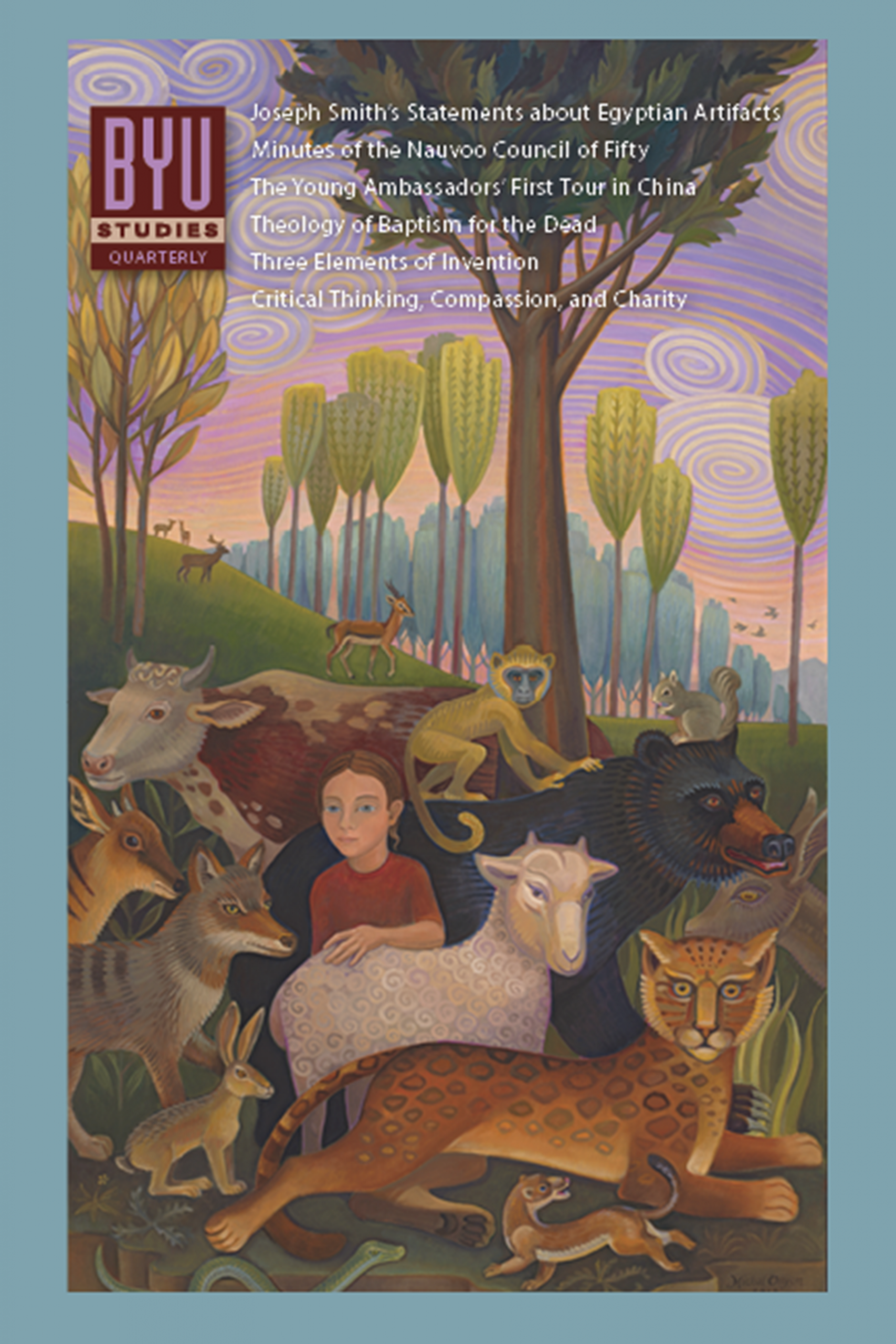 BYU Studies Quarterly 55:3
Next:
Understanding the Council of Fifty and Its Minutes